''Puck'' was the first successful humor magazine in the United States of colorful cartoons, caricatures and political satire of the issues of the day. It was founded in 1871 as a German-language publication by Joseph Keppler, an Austrian-born cartoonist. ''Puck'''s first English-language edition was published in 1877, covering issues like New York City's Tammany Hall, presidential politics, and social issues of the late 19th century to the early 20th century. "Puckish" means "childishly mischievous". This led Shakespeare's Puck character (from ''A Midsummer Night's Dream'') to be recast as a charming near-naked boy and used as the title of the magazine. ''Puck'' was published from 1871 until 1918.

After working with ''Leslie's Illustrated Weekly'' in New York — a well-established magazine at the time — Keppler created a satirical magazine called ''Puck,'' originally published in German. The weekly magazine was founded by Keppler in St. Louis, Missouri. It began publishing German-language periodicals in March 1871, though initially the German-language periodical publication failed. In 1877, after gaining wide support for an English version of ''Puck,'' Keppler published its first issue in English. The first English edition was 16 pages long and was sold for 16 cents. Sometime before 1887, ''Puck'' moved its editorial offices from St. Louis to New York City. In May 1893, Puck Press published ''A Selection of Cartoons from Puck by Joseph Keppler (1877–1892)'' featuring 56 cartoons chosen by Keppler as his best work. Also during 1893, Keppler temporarily moved to Chicago and published a smaller-format, 12-page version of ''Puck'' from the Chicago World's Fair grounds. Shortly thereafter, Joseph Keppler died, and Henry Cuyler Bunner, editor of ''Puck'' since 1877 continued the magazine until his own death in 1896. Harry Leon Wilson replaced Bunner and remained editor until he resigned in 1902. Joseph Keppler Jr. then became the editor. The English-language magazine continued in operation for more than 40 years under several owners and editors, until it was bought by the William Randolph Hearst company in 1916 (ironically, one 1906 cartoon mocked Hearst's bid for Congress with his newspapers' cartoon characters). The publication lasted two more years; the final edition was distributed on September 5, 1918.

A London edition of ''Puck'' was published between January 1889 and June 1890. Amongst contributors was the English cartoonist and political satirist Tom Merry.

The magazine consisted of 16 pages measuring 10 inches by 13.5 inches with front and back covers in color and a color double-page centerfold. The cover always quoted Puck saying, "What fools these mortals be!" The jaunty symbol of Puck is conceived as a putto in a top hat who admires himself in a hand-mirror. He appears not only on the magazine covers but over the entrance to the Puck Building in New York's Nolita neighborhood, where the magazine was published, as well. ''Puck'' gained notoriety for its witty, humorous cartoons and was the first to publish weekly cartoons using chromolithography in place of wood engraving, offering three cartoons instead of one. In its early years of publication, ''Pucks cartoons were largely printed in black and white, though later editions featured colorful, eye-catching lithographic prints in vivid color. A typical 32-page issue contained a full-color political cartoon on the front cover and a color non-political cartoon or comic strip on the back cover. There was always a double-page color centerfold, usually on a political topic. There were numerous black-and-white cartoons used to illustrate humorous anecdotes. A page of editorials commented on the issues of the day, and the last few pages were devoted to advertisements. 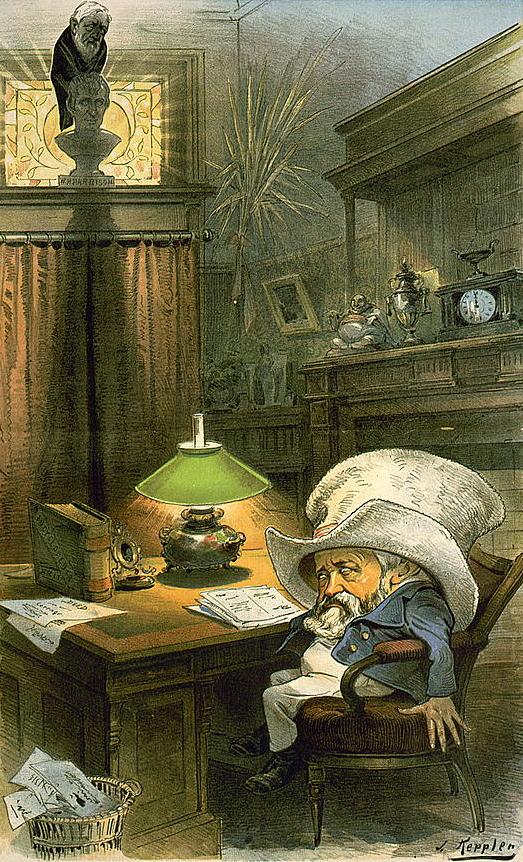 ''Puck'' was housed from 1887 in the landmark Chicago-style, Romanesque Revival Puck Building at Lafayette and Houston streets, New York City. The steel-frame building was designed by architects Albert and Herman Wagner in 1885, as the world's largest lithographic pressworks under a single roof, with its own electricity-generating dynamo. It takes up a full block on Houston Street, bounded by Lafayette and Mulberry streets.

Years after its conclusion, the "Puck" name and slogan were revived as part of the ''Comic Weekly'' Sunday comic section that ran on Hearst's newspaper chain beginning in September 1931 and continuing until the 1970s. It was then revived again by Hearst's ''Los Angeles Herald Examiner'', which folded in 1989. ''Mad'' (once located two blocks away at 225 Lafayette Street) parodied ''Puck''s motto as "What food these morsels be!"