system of
information retrieval Information retrieval (IR) in computing and information science is the process of obtaining information system resources that are relevant to an information need from a collection of those resources. Searches can be based on full-text search, fu ...
. From 1971 to 1997, online access to the MEDLINE database had been primarily through institutional facilities, such as university libraries. PubMed, first released in January 1996, ushered in the era of private, free, home- and office-based MEDLINE searching. The PubMed system was offered free to the public starting in June 1997.

In addition to MEDLINE, PubMed provides access to: * older references from the print version of ''
Index Medicus ''Index Medicus'' (''IM'') is a content curation, curated subset of MEDLINE, which is a bibliographic database of list of life sciences, life science and biomedical sciences, biomedical science information, principally scientific journal articles. ...
'', back to 1951 and earlier * references to some journals before they were indexed in Index Medicus and MEDLINE, for instance ''Science'', ''
BMJ ''The BMJ'' is a weekly peer-reviewed Peer review is the evaluation of work by one or more people with similar competencies as the producers of the work ( peers). It functions as a form of self-regulation by qualified members of a profess ...
'', and '' Annals of Surgery'' * very recent entries to records for an article before it is indexed with
Medical Subject Headings Medical Subject Headings (MeSH) is a comprehensive controlled vocabulary A vocabulary, also known as a wordstock or word-stock, is a set of familiar words within a person's language. A vocabulary, usually developed with age, serves as a useful ...
(MeSH) and added to MEDLINE * a collection of books available full-text and other subsets of NLM records * PMC citations * NCBI Bookshelf Many PubMed records contain links to full text articles, some of which are freely available, often in
PubMed Central PubMed Central (PMC) is a free digital repository that archives open access Open access (OA) is a set of principles and a range of practices through which research Research is "creativity, creative and systematic work undertaken to ...
and local mirrors, such as Europe PubMed Central. Information about the journals indexed in MEDLINE, and available through PubMed, is found in the NLM Catalog. , PubMed has more than 30 million citations and abstracts dating back to 1966, selectively to the year 1865, and very selectively to 1809. , 20 million of PubMed's records are listed with their abstracts, and 21.5 million records have links to full-text versions (of which 7.5 million articles are available, full-text for free). Over the last 10 years (ending 31 December 2019), an average of nearly 1 million new records were added each year. Approximately 12% of the records in PubMed correspond to cancer-related entries, which have grown from 6% in the 1950s to 16% in 2016. Other significant proportion of records correspond to "chemistry" (8.69%), "therapy" (8.39%), and "infection" (5%). In 2016, NLM changed the indexing system so that publishers are able to directly correct typos and errors in PubMed indexed articles. PubMed has been reported to include some articles published in predatory journals. MEDLINE and PubMed policies for the selection of journals for database inclusion are slightly different. Weaknesses in the criteria and procedures for indexing journals in PubMed Central may allow publications from predatory journals to leak into PubMed.

A new PubMed interface was launched in October 2009 and encouraged the use of such quick, Google-like search formulations; they have also been described as 'telegram' searches. By default the results are sorted by Most Recent, but this can be changed to Best Match, Publication Date, First Author, Last Author, Journal, or Title. The PubMed website design and domain was updated in January 2020 and became default on 15 May 2020, with the updated and new features. There was a critical reaction from many researchers who frequently use the site.

PubMed/MEDLINE can be accessed via handheld devices, using for instance the "PICO" option (for focused clinical questions) created by the NLM. A "PubMed Mobile" option, providing access to a mobile friendly, simplified PubMed version, is also available.

Simple searches on PubMed can be carried out by entering key aspects of a subject into PubMed's search window. PubMed translates this initial search formulation and automatically adds field names, relevant MeSH (Medical Subject Headings) terms, synonyms, Boolean operators, and 'nests' the resulting terms appropriately, enhancing the search formulation significantly, in particular by routinely combining (using the OR operator) textwords and MeSH terms. The examples given in a PubMed tutorial demonstrate how this automatic process works: Likewise,

For optimal searches in PubMed, it is necessary to understand its core component, MEDLINE, and especially of the MeSH (Medical Subject Headings) controlled vocabulary used to index MEDLINE articles. They may also require complex search strategies, use of field names (tags), proper use of limits and other features; reference librarians and search specialists offer search services. The search into PubMed's search window is only recommended for the search of unequivocal topics or new interventions that do not yet have a MeSH heading created, as well as for the search for commercial brands of medicines and proper nouns. It is also useful when there is no suitable heading or the descriptor represents a partial aspect. The search using the thesaurus MeSH is more accurate and will give fewer irrelevant results. In addition, it saves the disadvantage of the free text search in which the spelling, singular/plural or abbreviated differences have to be taken into consideration. On the other side, articles more recently incorporated into the database to which descriptors have not yet been assigned will not be found. Therefore, to guarantee an exhaustive search, a combination of controlled language headings and free text terms must be used.

Publication type parameter allows searching by the type of publication, including reports of various kinds of clinical research.

A reference which is judged particularly relevant can be marked and "related articles" can be identified. If relevant, several studies can be selected and related articles to all of them can be generated (on PubMed or any of the other NCBI Entrez databases) using the 'Find related data' option. The related articles are then listed in order of "relatedness". To create these lists of related articles, PubMed compares words from the title and abstract of each citation, as well as the MeSH headings assigned, using a powerful word-weighted algorithm. The 'related articles' function has been judged to be so precise that the authors of a paper suggested it can be used instead of a full search.

PubMed automatically links to MeSH terms and subheadings. Examples would be: "bad breath" links to (and includes in the search) "halitosis", "heart attack" to "myocardial infarction", "breast cancer" to "breast neoplasms". Where appropriate, these MeSH terms are automatically "expanded", that is, include more specific terms. Terms like "nursing" are automatically linked to "Nursing eSH or "Nursing ubheading. This feature is called Auto Term Mapping and is enacted, by default, in free text searching but not exact phrase searching (i.e. enclosing the search query with double quotes). This feature makes PubMed searches more sensitive and avoids false-negative (missed) hits by compensating for the diversity of medical terminology. PubMed does not apply automatic mapping of the term in the following circumstances: by writing the quoted phrase (e.g., "kidney allograft"), when truncated on the asterisk (e.g., kidney allograft*), and when looking with field labels (e.g., Cancer
i

The PubMed optional facility "My NCBI" (with free registration) provides tools for * saving searches * filtering search results * setting up automatic updates sent by e-mail * saving sets of references retrieved as part of a PubMed search * configuring display formats or highlighting search terms and a wide range of other options. The "My NCBI" area can be accessed from any computer with web-access. An earlier version of "My NCBI" was called "PubMed Cubby".

LinkOut is an NLM facility to link and make available full-text local journal holdings. Some 3,200 sites (mainly academic institutions) participate in this NLM facility (), from
Aalborg University Aalborg University (AAU) is a Denmark, Danish public university with campuses in Aalborg, Esbjerg, and Copenhagen founded in 1974. The university awards bachelor's degrees, master's degrees, and Doctor of Philosophy, PhD degrees in a wide variety ...
in Denmark to
ZymoGenetics ZymoGenetics, Inc was one of the oldest biotechnology/pharmaceutical companies in the USA, based in Seattle, Washington (state), Washington. The company was involved in the development of therapeutic proteins. Located on Lake Union, the address of ...
in Seattle. Users at these institutions see their institution's logo within the PubMed search result (if the journal is held at that institution) and can access the full-text. Link out is being consolidated with Outside Tool as of the major platform update coming in the Summer of 2019.

In 2016, PubMed allows authors of articles to comment on articles indexed by PubMed. This feature was initially tested in a pilot mode (since 2013) and was made permanent in 2016. In February 2018, PubMed Commons was discontinued due to the fact that "usage has remained minimal". 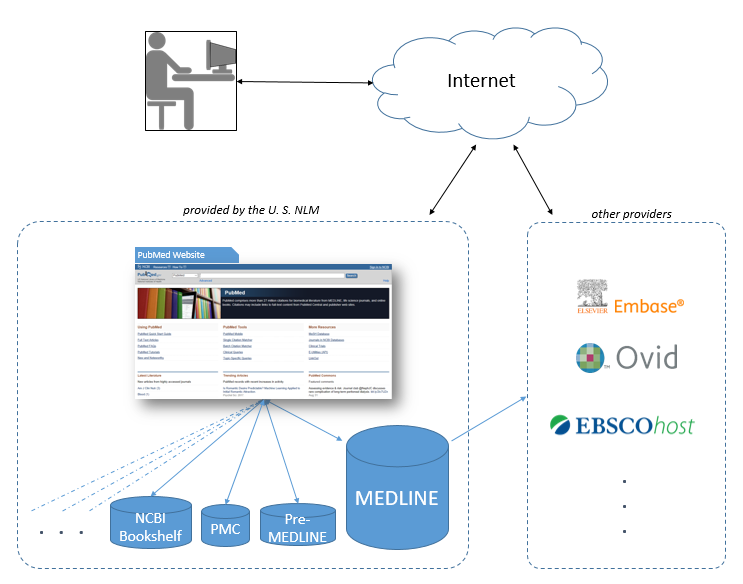 The National Library of Medicine leases the MEDLINE information to a number of private vendors such as
Embase Embase (often styled EMBASE for Excerpta Medica dataBASE) is a biomedical Biomedicine (also referred to as Western medicine, mainstream medicine or conventional medicine)
,
DialogDialogue Dialogue (sometimes spelled dialog in American English American English (AmE, AE, AmEng, USEng, en-US), sometimes called United States English or U.S. English, is the set of varieties of the English language native to the United St ...
,
EBSCO EBSCO Industries is an American company founded in 1944 by Elton Bryson Stephens Sr. and headquartered in Birmingham Birmingham ( ) is a City status in the United Kingdom, city and metropolitan borough in the West Midlands (county), Wes ...
, Knowledge Finder and many other commercial, non-commercial, and academic providers. , more than 500 licenses had been issued, more than 200 of them to providers outside the United States. As licenses to use MEDLINE data are available for free, the NLM in effect provides a free testing ground for a wide range of alternative interfaces and 3rd party additions to PubMed, one of a very few large, professionally curated databases which offers this option. Lu identifies a sample of 28 current and free Web-based PubMed versions, requiring no installation or registration, which are grouped into four categories: # Ranking search results, for instance:
eTBLAST eTBLAST was a free text-similarity service now defunct. It was initially developed by Alexander Pertsemlidis and Harold Garner, Harold “Skip” Garner in 2015 at The University of Texas Southwestern Medical Centre, University of Texas Southwest ...
; MedlineRanker; MiSearch; # Clustering results by topics, authors, journals etc., for instance: Anne O'Tate; ClusterMed; # Enhancing semantics and visualization, for instance: EBIMed; MedEvi. # Improved search interface and retrieval experience, for instance, askMEDLINE BabelMeSH; and PubCrawler. As most of these and other alternatives rely essentially on PubMed/MEDLINE data leased under license from the NLM/PubMed, the term "PubMed derivatives" has been suggested. Without the need to store about 90 GB of original PubMed Datasets, anybody can write PubMed applications using the eutils-application program interface as described in "The E-utilities In-Depth: Parameters, Syntax and More", by Eric Sayers, PhD. Various citation format generators, taking PMID numbers as input, are examples of web applications making use of the eutils-application program interface. Sample web pages includ
Citation Generator - Mick Schroeder