Protozoa (also protozoan, plural protozoans) is an informal term for a group of single-celled eukaryotes, either free-living or parasitic, which feed on organic matter such as other microorganisms or organic tissues and debris. Historically, protozoans were regarded as "one-celled animals", because they often possess animal-like behaviours, such as motility and predation, and lack a cell wall, as found in plants and many algae. Although the traditional practice of grouping protozoa with animals is no longer considered valid, the term continues to be used in a loose way to describe single-celled protists (that is, eukaryotes that are not animals, plants, or fungi) that feed by heterotrophy. Some examples of protozoa are Amoeba, Paramecium, Euglena and Trypanosoma. In some systems of biological classification, Protozoa remains a high-level taxonomic group. When first introduced by Georg Goldfuss in 1818, Protozoa was erected as a class within the animals, and its etymology is literally "first animals". In later classification schemes it was elevated to a variety of higher ranks, including phylum, subkingdom and kingdom, and sometimes included within Protoctista or Protista. With the advent of techniques such as molecular phylogenetics, it was realized that Protozoa did not represent a natural group; but while it is not an accepted taxon in cladistic analyses, some systematists continue to use it as a formal taxon. In a series of classifications proposed by Thomas Cavalier-Smith and his collaborators since 1981, Protozoa has been ranked as a kingdom. The seven-kingdom scheme presented by Ruggiero et al. in 2015, places eight phyla under Kingdom Protozoa: Euglenozoa, Amoebozoa, Metamonada, Choanozoa ''sensu'' Cavalier-Smith, Loukozoa, Percolozoa, Microsporidia and Sulcozoa. Notably, this kingdom excludes several major groups of organisms traditionally placed among the protozoa, including the ciliates, dinoflagellates, foraminifera, and the parasitic apicomplexans, all of which are classified under Kingdom Chromista. Kingdom Protozoa, as defined in this scheme, does not form a natural group or clade, but a paraphyletic group or evolutionary grade, within which the members of Fungi, Animalia and Chromista are thought to have evolved. 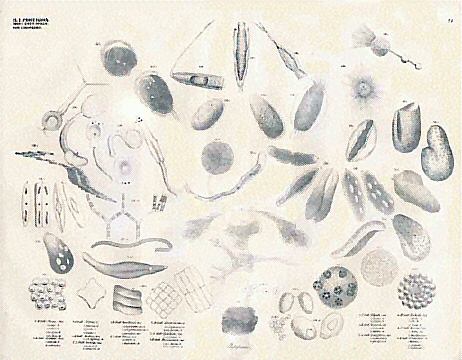 The word "protozoa" ''(singular ''protozoon'' or ''protozoan'')'' was coined in 1818 by zoologist Georg August Goldfuss, as the Greek equivalent of the German ', meaning "primitive, or original animals" (' ‘proto-’ + ' ‘animal’). Goldfuss created Protozoa as a class containing what he believed to be the simplest animals.