''Prosodia Rationalis'' is the short title of the 1779 expanded second edition of Joshua Steele's ''An Essay Towards Establishing the Melody and Measure of Speech, to be Expressed and Perpetuated by Peculiar Symbols'', originally published in 1775. In this work Steele proposes a notation for linguistic prosody. The notation is inspired by that used in music. The treatise is notable as one of the earliest works in the subject and its insight that in speech, unlike in most music, pitches slide rather than exhibit distinct tones held for lengths of time.

In 1774
James Burnett, Lord Monboddo James Burnett, Lord Monboddo (baptised 25 October 1714; died 26 May 1799), was a Scottish judge, scholar of linguistic evolution, philosopher and deist. He is most famous today as a founder of modern comparative historical linguistics ...
published the second of 6 volumes of his ''On the Origin and Progress of Language'' containing, among much else, a section dealing with "language considered as sound". Sir
John PringleJohn Pringle may refer to: * John Pringle, Lord Haining (c. 1674–1754), Scottish landowner, judge and politician, shire commissioner for Selkirk 1702–07, MP for Selkirkshire 1708–29, Lord of Session * Sir John Pringle, 1st Baronet (1707–1782 ...
(then president of the
Royal Society The Royal Society, formally The Royal Society of London for Improving Natural Knowledge, is a learned society A learned society (; also known as a learned academy, scholarly society, or academic association) is an organization that exis ...
) asked Joshua Steele to respond to some of Monboddo's statements, particularly the statement:

That there is no accent, such as the Greek and Latin accents, in any modern language. ... We have accents in English, and syllabic accents too; but there is ''no change of the tone in them''; the voice is only raised more, so as to be ''louder'' upon one syllable than another. ... Now I appeal to them, whether they can perceive any difference of tone betwixt the ''accented'' and ''unaccented'' syllable of any word? And if there be none, then is the ''music of our language'', in this respect, ''nothing better'' than the ''music of a drum'', in which we perceive no difference except that of ''louder'' or ''softer''.

Steele's objection occupies most of the first 2 Parts of ''Prosodia Rationalis''.

But as each section of Steele's argument was completed, he sent it off for Lord Monboddo's comments, which were then incorporated along with Steele's replies in subsequent sections of the book: "consequently, ''Prosodia Rationalis'' is, in effect, an extended dialogue between the two men, to which is appended, in the second edition, an additional series of questions from other hands, together with the author's replies."

The five orders of accidents 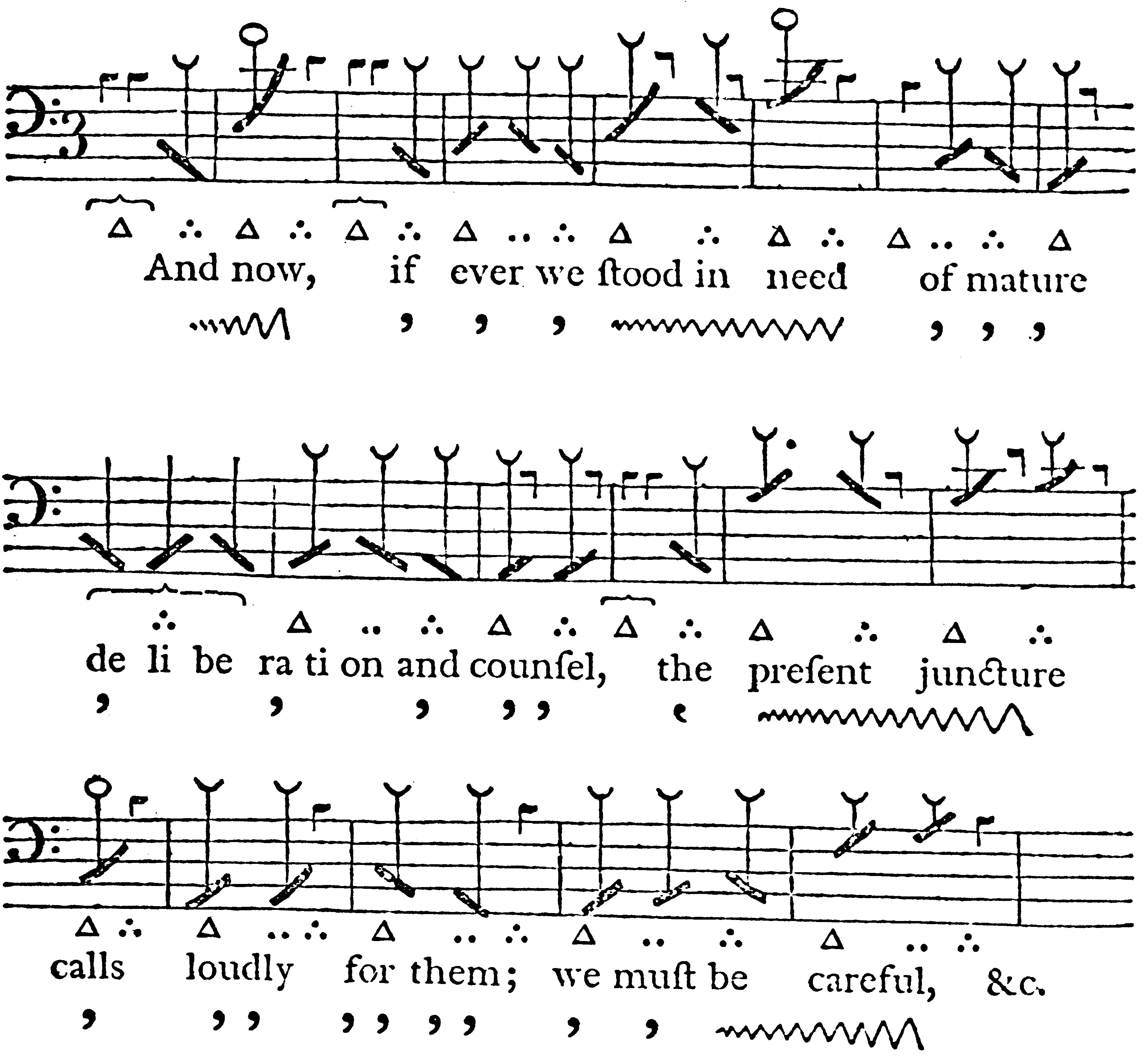 Steele proposed that the "melody and measure" of speech could be analyzed and recorded by notating five distinct types of characteristics, the "five orders of accidents". These are broadly analogous to the
suprasegmentals In linguistics Linguistics is the science, scientific study of language. It encompasses the analysis of every aspect of language, as well as the methods for studying and modeling them. The traditional areas of linguistic analysis include ...
of modern linguistics. The five orders are: #Accent: the pitch (''melody'') of the syllable, not—as in music—a fixed pitch, but rather ''acute'' (rising), ''grave'' (falling), or ''circumflex'' (both rising and falling, resulting in either a peak or dip in the middle). #Quantity: the duration of the syllable, regarded as semibrief (whole note), minim (half note), crotchet (quarter note), or quaver (eighth note); plus dotted (× 1.5) versions of each length. #Pause: ''silence'' or ''rest'', measured by the same durations as quantity. (Steele marks his pauses with the accidents of both quantity and poize—but logically ''not'' accent or force. Therefore, pause does not exist, in his practice, on the same hierarchical level as the other accidents, functioning more like a syllable.) #Poize: also ''emphasis'' or ''cadence'', "a term
mphasis Mphasis Limited is an Indian multinational Multinational may refer to: * Multinational corporation, a corporate organization operating in multiple countries * Multinational force, a military body from multiple countries * Multinational state, ...
Steele uses ambivalently and confusedly to denote both the absolute duration between stresses (''cadence'', ''bar''), and also the stresses themselves..." Steele notes three levels: heavy, light, lightest. "Heavy" is equivalent to the Greek ''thesis'' (essentially "downbeat"), and "light" to the Greek ''arsis'' (essentially "upbeat"), hence in his quasi-musical notation every bar begins with a heavy element; "lightest" is called into service for triple-time cadences, "minuet and jigg". #Force: the loudness of the syllable, marked as loud, louder, soft, or softer; Steele also occasionally marks crescendos and diminuendos over a string of syllables.