Prem Tinsulanonda ( th|เปรม ติณสูลานนท์, , ; 26 August 1920 – 26 May 2019) was a Thai military officer, politician, and statesman who served as the Prime Minister of Thailand from 3 March 1980 to 4 August 1988, during which time he was credited with ending a communist insurgency and presiding over accelerating economic growth. As president of the Privy Council, he served as Regent of Thailand from the death of King Bhumibol Adulyadej on 13 October 2016, until the 1 December 2016 proclamation of Vajiralongkorn as King. At the age of 98, Prem was the longest-living Thai Prime Minister. During the Thai political crisis of the mid-2000s, he was accused by deposed prime minister Thaksin Shinawatra and his supporters of masterminding the 2006 coup, as well as in the appointment of the post-coup legislature and interim government of Surayud Chulanont. The military junta that ousted Thaksin denied that Prem had any important political role. Prem, as the President of the Privy Council, promoted King Bhumibol's ideologies and royal projects, though he sometimes represented himself as being the voice of the king. He urged Thai society to follow the king's advice and himself founded several welfare projects related to education, drug suppression, poverty, and national unity. A southerner, Prem had also dealt personally with trying to resolve the South Thailand insurgency. 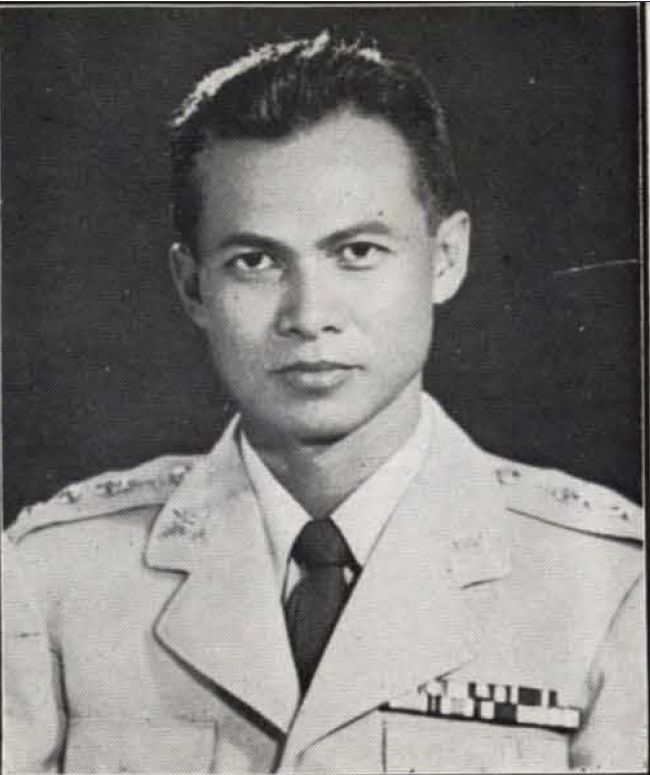 Born in Songkhla Province in south Thailand, Prem was the son of ''Luang'' Winittantagum (Bueng Tinsulanonda) and Odd Tinsulanonda and had seven siblings. His father was the warden of Songkhla prison, and Prem jokingly claimed to have spent most of his childhood in prison. Prem attended Maha Vajiravudh Secondary School in Songkhla, followed by Suankularb Wittayalai School in Bangkok. He entered the Royal Thai Army Academy (now Chulachomklao Royal Military Academy) in 1941. A distinguished army officer, he entered politics in 1959, as a member of the Constitution Drafting Committee. From 1968 to 1971 he was a Senator, in 1972–73 was a Member of Parliament, and in 1976 was appointed to the Advisory Council of Prime Minister Thanin Kraivichien. Under Prime Minister Kriangsak Chomanan, he was Deputy Interior Minister in 1977–78 and Minister of Defence from 1979 to 1986. General Prem is known for initiating the negotiations with the members of the Communist Party of Thailand. Consequently, an amnesty was declared and many communist members — including former student protesters — returned home. This helped end the fighting between the government and communist guerrillas in the 1980s. 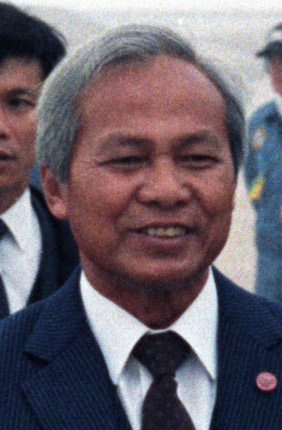 From 1–3 April 1981, a group of army colonels known as "The Young Turks" launched a coup attempt in Bangkok. Prem escorted the King and Queen to Nakhon Ratchasima, and began negotiating with the coup leaders. On 3 April, major leaders agreed to end their "April Fool's Day" coup attempt. Some were allowed to take refuge abroad. Another coup attempt took place on 9 September 1985. Its leaders had been involved in the previous coup four years earlier. The attempt became violent when rebel soldiers fired at the government's information centres, killing an Australian journalist and his American sound man. The coup attempt was supported by Ekkayuth Anchanbutr, a businessman who had fled the country after Prem's government issued new legislation against financial crime. By late afternoon of the same day, the rebels surrendered to the government. Most of its leaders, including Ekayuth, fled abroad.

Prem was the target of at least four assassination attempts in 1982. The investigation implicated military officers who were among the 1981 coup's leaders and former communists who opposed Prem's amnesty policy. This became one of the pretexts claimed by the coup leaders of 1991.

Communist insurgents in Thailand, mainly led by the Communist Party of Thailand, began their armed struggle in the 1960s. After the crackdown of a students' rally at Thammasat University in October 1976, communist activities in the countryside in the northeast of the country increased as students field to join with the party. In the 1980s, Prem began changing his policy towards the communist insurgents. Previously Prem sent his men to China, persuading it to stop supporting the Communist Party of Thailand. China agreed. Prem's new policy offered amnesty to all insurgents, legally called "the communist terrorists". As a result, thousands of former students who had fled to the jungle left the communist strongholds.

Due to political unrest in 1988, Prem dissolved parliament and called for a general election. Following the election, leaders of the winning political parties asked Prem to continue his premiership, but Prem stepped down. Consequently, Chatichai Choonhavan, head of Chart Thai Party, was chosen to be the new prime minister. On 29 August 1988, Prem received honored as a statesman by being the second person from Pridi Banomyong. On 4 September 1998, Prem was appointed to head King Bhumibol Adulyadej's Privy Council, becoming the successor to Sanya Dharmasakti. During the Black May, bloody political crisis in May 1992, Prem was said to have played a crucial role in ending the military suppression of the demonstrations, consulting with King Bhumibol to end the violence and bloodshed.

Prem's conflicts with Thaksin's government were apparent from 2005, although he had never mentioned Thaksin. Prem, still influential with the armed forces, became a critic of Thaksin's choice of military commanders, especially when Thaksin named his first cousin, general Chaiyasith Shinawatra, as army chief. Thaksin and his supporters immediately reacted against what they called an "out of constitutional" individual (Prem) "meddling" in Thai politics. Amid the tensions between Thaksin and an "unconstitutional figure", on 9 March 2006, a small bomb exploded outside Prem's residence in Bangkok. Two people were slightly injured, including a passing British tourist. Police said the device had been hidden beneath a stone bench near an unoccupied security booth at the entrance to the residence. The guards were inside the residence at the time. Three cars parked nearby were damaged by the blast. Prime Minister Thaksin Shinawatra denied being involved in the attack.

Role in political crisis and 2006 coup

Prem found himself a leading player in the Thailand political crisis of 2005-2006. In a number of public lectures, he had criticised the attempts of politicians to tighten their grip on the army, urging the public to resist corruption and vested interests. Some commentators inferred that Prem was criticizing Prime Minister Thaksin Shinawatra and his administration. In June 2006, Thaksin gave a controversial speech to officials claiming "the intervention of an extra-constitutional power, or figure" was seeking to damage his government. Thaksin's supporters presumed Prem was that figure, though Thaksin himself mentioned no names. Following the September 2006 military coup, Thaksin's supporters blamed Prem, whom they decided must have been the mastermind behind the coup against Thaksin. Prem did help secure the appointment of Surayud Chulanont, another member of the King's Privy Council, as Premier, and allegedly had a say in the appointment of Surayud's Cabinet. Critics claimed the cabinet was full of "Prem's boys". In an interview published in early-2006, Prem explained his vision of a distinctive Thai-style democracy in which the monarch remains the ultimate defender of the public interest and retains control of the armed forces. Prem used an equestrian metaphor to describe the relative roles of monarch, prime minister, and the army: "In horse racing they have the stable and the owner of the stable owns the horse. The jockey comes and rides the horse during the race, but the jockey does not own the horse. It's very easy o comprehend" The issue of Prem's responsibility for the coup and the subsequent junta has been hotly contested. A ruling Military Council spokesman stated that Prem was not behind the coup. Thai police Lieutenant-General Theeradech Rodphot-hong, head of the Special Branch, cautioned that any legal proceedings would be improper as these could involve the king in a political conflict. He also urged the activists to drop their campaign as it could create conflict within the country. On 22 July 2007, thousands of protesters, mostly Thaksin supporters, demonstrated in front of Prem's house, calling for him to resign. When the demonstration exploded into violence, police cracked down and arrested several protest leaders, including an interim National Human Rights Commissioner and a former judge, both being former members of deposed prime minister Thaksin's political party. Afterwards, junta chief Sonthi Boonyaratklin visited Prem to apologize for the protests on behalf of the government. A day later, Prime Minister Surayud Chulanont, along with 34 members of his Cabinet, went to Prem's house to apologize to Prem for failing to ensure peace. Surayud accused the protestors of trying to bring down the highest institution of the country. Government spokesman Yongyuth Mayalap said Prem categorically denied the protestors' allegations that he was behind the military coup. According to Yongyuth, Prem said that the charges were repetitive, baseless and provocative. Prem considered taking legal action against the pro-Thai Rak Thai United Front for Democracy against Dictatorship for defamation. A source close to him said Gen Prem compiled evidence and might file defamation charges against nine key anti-coup figures. Prem continued to wield considerable influence over the military. Interior Minister Aree Wongarya and his deputy, Banyat Chansena, held talks with Prem at his residence on 1 August 2007. During the meeting, Prem gave advice on resolving the South Thailand insurgency and on providing assistance for family members of the victims in accordance with the government's ''Sarn Jai Thai Su Jai Tai'' campaign. In summing up Prem's legacy, a ''Nation'' editorial entitled, "Prem was no friend of the people", wrote that, "Prem's legacy will be to inspire military top brass to maintain their strong influence in politics, to the diminishment of democracy in Thailand."

Before and during the mass protests of Thaksin's supporters, the UDD, Thaksin started mentioning Prem's name publicly. UDD leaders harshly blasted Prem for meddling in politics, calling him an ''ammatya'', or 'royal puppet', or 'aristocrat', and a threat to democracy as he had never been democratically elected but had been appointed by the king. Prem did not respond to these attacks.

Upon the death of King Bhumibol Adulyadej, Prem, at age 96, became regent of Thailand as Crown Prince Maha Vajiralongkorn asked for period of mourning before being proclaimed king. For the duration of Prem's regency the Privy Council appointed Thanin Kraivichien as its interim president.

Prem never married and once declared himself to be "married" to the army.

Prem was actively involved in many charities, including the Prem Foundation. He established the Prem Tinsulanonda International School, which opened in August 2001 in Chiang Mai Province. The campus covers ; the student body numbers over 400, with more than 36 nationalities represented.

Thai government builds Tinsulanonda Bridge, located in Mueang Songkhla District and Singhanakhon District by connecting Koh Yo on both sides between the Ban Nam spread Mueang Songkhla District And Ban Khao Kheow, Singhanakhon District. The length of the bridges is 940 meters and 1,700 meters, respectively, for a total of 2,640 meters. People in Songkhla province favor this bridge as "Pa Prem Bridge" "Tin Bridge" or "Prem Bridge" and is considered as one of the famous tourist attractions of the province. Prem offer to build Prem Tinsulanonda Public Library in front of the 3rd Cavalry Brigade, Prem Tinsulanonda Camp at Nam Phong District, Khon Kaen Province to provide services to people and officers in the 3rd Cavalry Brigade, Prem Tinsulanonda Camp and interested people. Prem statue located in front of the 2nd Army Military Museum, beside the 2nd Army Headquarters, in Suranaree Camp, Muang District, Nakhon Ratchasima Province. The area beneath the statue has a message that says "Born to repay the land". The signature is written in gold of General Prem Tinsulanonda.

Knight Grand Cross of the Order of the Netherlands Lion **

Grand Cross of the Legion of Honour *: **

Grand Cross of the Order of Charles III *: **

Grand Cross of the Order of Merit of the Italian Republic(O.M.R.I) *: **

Grand Cordon of the Order of the Liberator *: **

Grand Cross 1st Class of the Order of Merit of the Federal Republic of Germany *: **

Grand Cross of the Order of the Dannebrog *: **

Grand Star of the Decoration of Honour for Services to the Republic of Austria *: **

Grand Cross of the Order of the Liberator General San Martin *: **

Chief Commander of the Legion of Merit *: **

Special Grand Cordon of the Order of Brilliant Star