The Pig War was a confrontation in 1859 between the United States and the United Kingdom over the British–U.S. border in the San Juan Islands, between Vancouver Island (present-day Canada) and the State of Washington. The Pig War, so called because it was triggered by the shooting of a pig, is also called the Pig Episode, the Pig and Potato War, the San Juan Boundary Dispute and the Northwestern Boundary Dispute. Despite being referred to as a war, there were no casualties on either side, other than the pig.

The Oregon Treaty of June 15, 1846, resolved the Oregon boundary dispute by dividing the Oregon Country/Columbia District between the United States and Britain "along the forty-ninth parallel of north latitude to the middle of the channel which separates the continent from Vancouver Island, and thence southerly through the middle of the said channel, and of the Strait of Juan de Fuca, to the Pacific Ocean." However, there are actually two straits that could be called the middle of the channel: Haro Strait, along the west side of the San Juan Islands; and Rosario Strait, along the east side. In 1846, there was still some uncertainty about the geography of the region. The most commonly available maps were those of George Vancouver, published in 1798, and of Charles Wilkes, published in 1845. In both cases the maps are unclear in the vicinity of the southeastern coast of Vancouver Island and the Gulf Islands. As a result, Haro Strait is not fully clear either. In 1856, the US and Britain set up a Boundary Commission to resolve a number of issues regarding the international boundary, including the water boundary from the Strait of Georgia to the Strait of Juan de Fuca. The British appointed James Charles Prevost First Commissioner, George Henry Richards Second Commissioner, and William A. G. Young Secretary. The US appointed Archibald Campbell First Commissioner, John Parke Second Commissioner, and William J. Warren Secretary. On June 27, 1857, the American and British commissioners met for the first time on board the British ship HMS ''Satellite'', anchored in Esquimalt Harbour. The two sides met several more times in 1857 in Esquimalt Harbour and Nanaimo Harbour, and corresponded by letter between meetings. The water boundary was discussed from October to December. From the start, Prevost maintained that Rosario Strait was required by the treaty's wording and was intended by the treaty framers, while Campbell had the same opinion for Haro Strait. Prevost held that the channel specified in the treaty must have three key qualities: # it must separate the continent from Vancouver Island, # it must carry the boundary in a southerly direction, and # it must be navigable. Only Rosario fulfilled these requirements, he wrote. Campbell countered that the expression "southerly", in the treaty, was to be understood in a general sense, that Rosario Strait did not separate the continent from Vancouver Island, but the San Juan Islands from Lummi Island, Cypress Island, Fidalgo Island, and others, and that navigability was not germane to the issue, but even if it was, Haro Strait was the wider and more direct passage. Finally he challenged Prevost to produce any evidence showing that the treaty framers had intended Rosario Strait. Prevost responded to the challenge by referring to American maps showing the boundary running through Rosario Strait, included one by John C. Frémont, produced for and published by the US government, and another by John B. Preston, Surveyor General of Oregon in 1852. To the other points, Prevost repeated his statements about Rosario Strait's navigability—the channels between Lummi, Cypress, and Fidalgo islands not being navigable—and that a line through Rosario would be southerly, while one through Haro would have to be drawn westerly. The two continued to discuss the issue into December 1857, until it was clear what each side's argument was and that neither would be convinced of the other. Prevost made a final offer at the sixth meeting, December 3. He suggested a compromise line through San Juan Channel, which would give the US all the main islands except San Juan Island. This offer was rejected and the commission adjourned, agreeing to report back to their respective governments. Thus ambiguity over the water boundary remained. Because of this ambiguity, both the United States and Britain claimed sovereignty over the San Juan Islands. During this period of disputed sovereignty, Britain's Hudson's Bay Company established operations on San Juan and turned the island into a sheep ranch. Meanwhile, by mid-1859, twenty-five to twenty-nine American settlers had arrived. San Juan Island held significance not for its size, but as a military strategic point. While the British held Fort Victoria on Vancouver Island to the west, overlooking the Strait of Juan de Fuca, the entry point to Haro Strait, leading to the Strait of Georgia, the nation that held the San Juan Islands would be able to dominate all the straits connecting the Strait of Juan de Fuca with the Strait of Georgia. General George B. McClellan, George Pickett’s West Point Classmate and lifelong friend, claimed that General William S. Harney and Pickett conspired with a cabal, to start a war with Britain, creating a common enemy, to head off a north–south confrontation. However, General Granville O. Haller debunked McClellan's theory. He said they had wanted to start a war, but with hope of distracting the north so that the south could gain independence. The theories are given credence when it is noted that Major General Silas Casey, then a Lieutenant Colonel and deputy commander of the 9th Infantry Regiment, was reduced to a support role for Captain George Pickett who was given independent jurisdiction over a vast area by Harney, then a Brevet Major, and was also passed over by Harney in favor of Pickett when given this choice command. On the other hand, it can be said that Lt Col Casey had not been reduced, for he was given command over the USS ''Massachusetts'' and Major Haller to protect and supervise the water of Puget Sound. He was given discretion to deviate from his orders, based on his military experience. (His textbook on infantry tactics was used at West Point during the Civil War.)

On June 15, 1859, exactly thirteen years after the adoption of the Oregon Treaty, the ambiguity led to direct conflict. Lyman Cutlar, an American farmer who had moved onto San Juan Island claiming rights to live there under the Donation Land Claim Act, found a Large Black pig rooting in his garden and eating his tubers. This was not the first occurrence. Cutlar was so upset that he took aim and shot the pig, killing it. It turned out that the pig was owned by an Irishman, Charles Griffin, who was employed by the Hudson's Bay Company to run the sheep ranch on the island. He also owned several pigs that he allowed to roam freely. The two had lived in peace until this incident. Cutlar offered $10 () to Griffin to compensate for the pig, but Griffin was unsatisfied with this offer and demanded $100 (). Following this reply, Cutlar believed he should not have to pay for the pig because the pig had been trespassing on his land. One likely apocryphal account has Cutlar saying to Griffin, "It was eating my potatoes"; and Griffin replying, "It is up to you to keep your potatoes out of my pig." When British authorities threatened to arrest Cutlar, American settlers called for military protection. 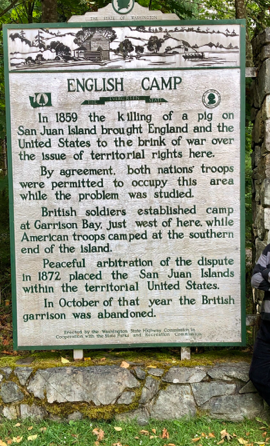 Brigadier General William S. Harney, commanding the Department of Oregon, initially dispatched Captain George Pickett and 66 American soldiers of the 9th Infantry Regiment under Pickett's command, to San Juan Island with orders to prevent the British from landing; the regiment sailed aboard . Concerned that a squatter population of Americans would begin to occupy San Juan Island if the Americans were not kept in check, the British sent three warships under the command of Captain Geoffrey Hornby to counter the Americans. Pickett was quoted as saying defiantly, "We'll make a Bunker Hill of it," placing him in the national limelight. Pickett sited his company and battery near the Hudson's Bay Company's Belle Vue sheep farm located near today's Cattle Point Light, and directly under the guns of HMS ''Satellite'', a British ship. When this tactical error was pointed out, Capt Pickett moved his battery of cannon a few miles north to high ground overlooking both Griffin Bay and the Strait of Juan de Fuca, and commenced to build a redoubt for his cannon. 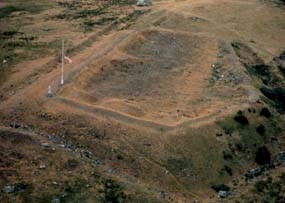 Pickett established the American Camp near the south end of San Juan Island, today one of two historical sites on the island, the other being the British Camp, manned by the Royal Marines on the north end of the island. The camp redoubt was built under the supervision of new West Point graduate 2nd Lieutenant Henry Martyn Robert; Robert went on to become a General in the Army of the Potomac during the American Civil War and author of ''Robert's Rules of Order''. Robert's Redoubt is considered the best-preserved fortification of its kind in the United States. (To the east is Jackle's Lagoon, named for George Jackle, a soldier stationed at the American Camp.) The situation continued to escalate. By August 10, 1859, 461 Americans with 14 cannons under Colonel Silas Casey were opposed by five British warships mounting 70 guns and carrying 2,140 men. The governor of the Colony of Vancouver Island, James Douglas, ordered British Rear Admiral Robert L. Baynes to land marines on San Juan Island and engage the American soldiers under the command of Brigadier-General Harney. (Harney's forces had occupied the island since July 27, 1859.) Baynes refused, deciding that "two great nations in a war over a squabble about a pig" was foolish. Local commanding officers on both sides had been given essentially the same orders: defend yourselves, but absolutely do not fire the first shot. For several days, the British and U.S. soldiers exchanged insults, each side attempting to goad the other into firing the first shot, but discipline held on both sides, and thus no shots were fired.

When news about the crisis reached Washington and London, officials from both nations were shocked and took action to calm the potentially explosive international incident.