Click Here for Items Related To - Parliament of Great Britain

Following the
Treaty of Union 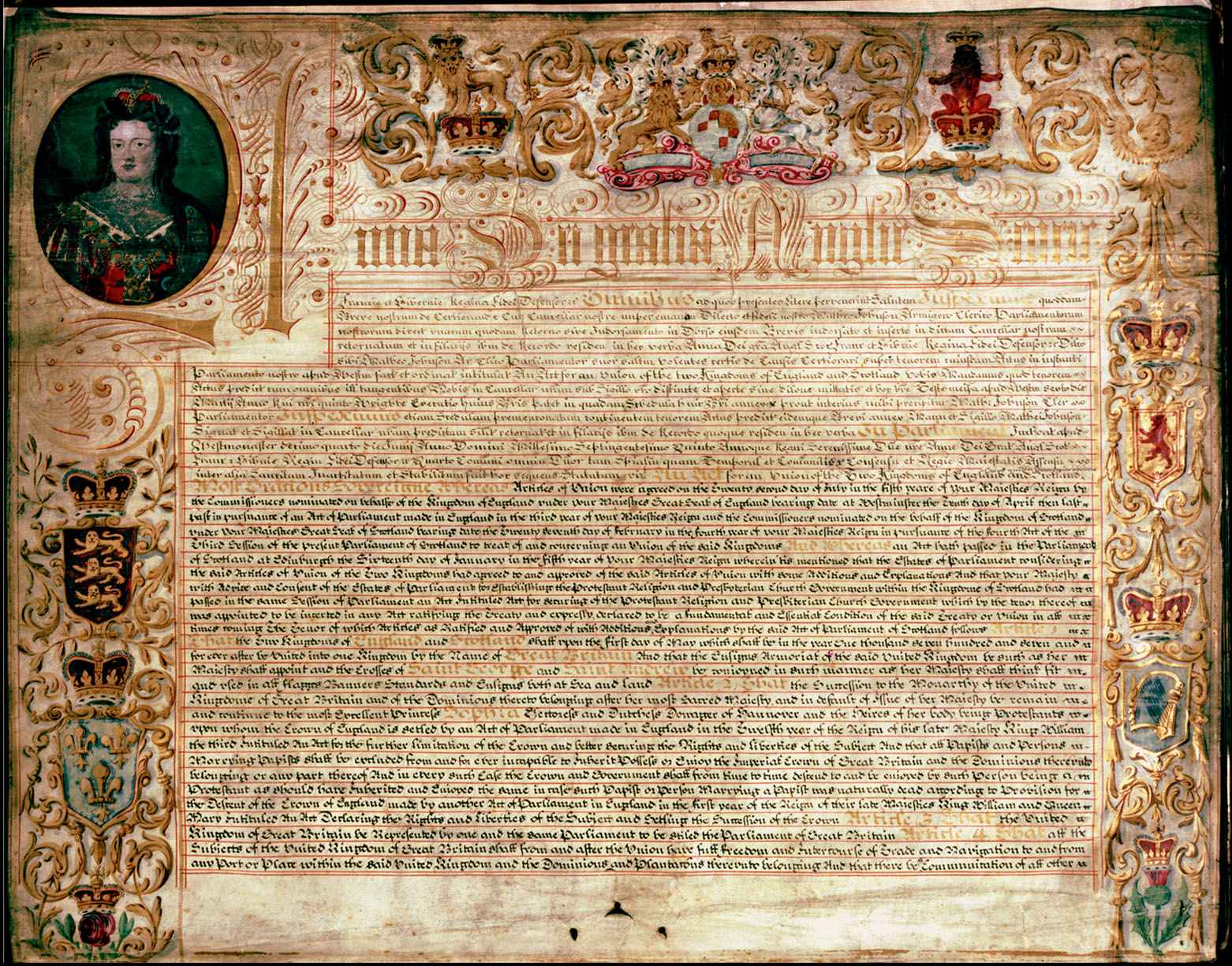 in 1706, Acts of Union ratifying the Treaty were passed in both the Parliament of England and the Parliament of Scotland, which created a new Kingdom of Great Britain. The Acts dissolved both parliaments, replacing them with a new parliament, referred to as the 'Parliament of Great Britain', based in the home of the former English parliament. All of the traditions, procedures, and standing orders of the English parliament were retained, as were the incumbent officers, and members representing England comprised the overwhelming majority of the new body. It was not even considered necessary to hold a new general election. While Scots law and Scottish legislation remained separate, new legislation was thereafter to be enacted by the new parliament. After the Hanoverian King George I ascended the British throne in 1714 through the Act of Settlement of 1701, real power continued to shift away from the monarchy. George was a German ruler, spoke poor English, and remained interested in governing his dominions in continental Europe rather than in Britain. He thus entrusted power to a group of his ministers, the foremost of whom was Sir Robert Walpole, and by the end of his reign in 1727 the position of the ministers — who had to rely on Parliament for support — was cemented. George I's successor, his son George II, continued to follow through with his father's domestic policies and made little effort to re-establish monarchical control over the government which was now in firm control by Parliament. By the end of the 18th century the monarch still had considerable influence over Parliament, which was dominated by the English aristocracy, by means of patronage, but had ceased to exert direct power: for instance, the last occasion on which the Royal Assent was withheld was in 1708 by Queen Anne. At general elections the vote was restricted to Freehold (law), freeholders and landowners, in constituencies that had changed little since the Middle Ages, so that in many Rotten and pocket boroughs, "rotten" and "pocket" boroughs seats could be bought, while major cities remained unrepresented, except by the Knights of the Shire representing whole counties. Reformers and Radicalism (historical), Radicals sought parliamentary reform, but as the French Revolutionary Wars developed the British government became repressive against dissent and progress towards reform was stalled. George II's successor, George III of the United Kingdom, George III, sought to restore royal supremacy and absolute monarchy, but by the end of his reign the position of the king's ministers — who discovered that they needed the support of Parliament to enact any major changes — had become central to the role of British governance, and would remain so ever after. During the first half of George III's reign, the monarch still had considerable influence over Parliament, which itself was dominated by the patronage and influence of the English nobility. Most candidates for the House of Commons were identified as Whigs (British political party), Whigs or Tories (British political party), Tories, but once elected they formed shifting coalitions of interests rather than dividing along clear party lines. At general elections the vote was restricted in most places to property owners, in constituencies which were out of date and did not reflect the growing importance of manufacturing towns or shifts of population, so that in the rotten and pocket boroughs seats in parliament could be bought from the rich landowners who controlled them, while major cities remained unrepresented. Reformers like William Beckford (politician), William Beckford and Radicalism (historical), Radicals beginning with John Wilkes called for reform of the system. In 1780, a draft programme of reform was drawn up by Charles James Fox and Thomas Brand Hollis and put forward by a sub-committee of the electors of Westminster. This included calls for the six points later adopted by the Chartism, Chartists. The American Revolutionary War, American War of Independence ended in defeat for a foreign policy that sought to prevent the Thirteen Colonies, thirteen American colonies from breaking away and forming their United States, own independent nation, something which George III of the United Kingdom, George III had fervently advocated, and in March 1782 the king was forced to appoint an administration led by his opponents which sought to curb royal patronage. In November of 1783, he took the opportunity to use his influence in the House of Lords to defeat a bill to reform the East India Company, Honourable East India Company, dismissed the government of the day, and appointed William Pitt the Younger to form a new government. Pitt had previously called for Parliament to begin to reform itself, but he did not press for long for reforms the king did not like. Proposals Pitt made in April 1785 to redistribute seats from the "rotten boroughs" to London and the counties were defeated in the House of Commons by 248 votes to 174. In the wake of the French Revolution of 1789, Radicalism (historical), Radical organisations such as the London Corresponding Society sprang up to press for parliamentary reform, but as the French Revolutionary Wars developed the government took extensive repressive measures against feared domestic unrest aping the democratic and egalitarian ideals of the French Revolution and progress toward reform was stalled for decades.

Parliament of the United Kingdom