The onion (''Allium cepa'' L., from Latin ''cepa'' "onion"), also known as the bulb onion or common onion, is a vegetable that is the most widely cultivated species of the genus ''Allium''. The shallot is a botanical variety of the onion. Until 2010, the shallot was classified as a separate species. Its close relatives include the garlic, scallion, leek, chive, and Chinese onion. This genus also contains several other species variously referred to as onions and cultivated for food, such as the Japanese bunching onion (''Allium fistulosum''), the tree onion (''A.'' ×''proliferum''), and the Canada onion (''Allium canadense''). The name "wild onion" is applied to a number of ''Allium'' species, but ''A. cepa'' is exclusively known from cultivation. Its ancestral wild original form is not known, although escapes from cultivation have become established in some regions. The onion is most frequently a biennial or a perennial plant, but is usually treated as an annual and harvested in its first growing season. The onion plant has a fan of hollow, bluish-green leaves and its bulb at the base of the plant begins to swell when a certain day-length is reached. The bulbs are composed of shortened, compressed, underground stems surrounded by fleshy modified scale (leaves) that envelop a central bud at the tip of the stem. In the autumn (or in spring, in the case of overwintering onions), the foliage dies down and the outer layers of the bulb become dry and brittle. The crop is harvested and dried and the onions are ready for use or storage. The crop is prone to attack by a number of pests and diseases, particularly the onion fly, the onion eelworm, and various fungi which can cause rotting. Some varieties of ''A. cepa'', such as shallots and potato onions, produce multiple bulbs. Onions are cultivated and used around the world. As a food item, they are usually served cooked, as a vegetable or part of a prepared savoury dish, but can also be eaten raw or used to make pickles or chutneys. They are pungent when chopped and contain certain chemical substances which irritate the eyes.

The onion plant (''Allium cepa''), also known as the bulb onion or common onion, is the most widely cultivated species of the genus ''Allium.'' It was first officially described by Carl Linnaeus in his 1753 work ''Species Plantarum''. A number of synonyms have appeared in its taxonomic history: * ''Allium cepa'' var. ''aggregatum'' – G. Don * ''Allium cepa'' var. ''bulbiferum'' – Regel * ''Allium cepa'' var. ''cepa'' – Linnaeus * ''Allium cepa'' var. ''multiplicans'' – L.H. Bailey * ''Allium cepa'' var. ''proliferum'' – (Moench) Regel * ''Allium cepa'' var. ''solaninum'' – Alef * ''Allium cepa'' var. ''viviparum'' – (Metz) Mansf. ''A. cepa'' is known exclusively from cultivation, but related wild species occur in Central Asia. The most closely related species include ''A. vavilovii'' (Popov & Vved.) and ''A. asarense'' (R.M. Fritsch & Matin) from Iran. However, Zohary and Hopf state that "there are doubts whether the ''A. vavilovii'' collections tested represent genuine wild material or only feral derivatives of the crop." The vast majority of cultivars of ''A. cepa'' belong to the "common onion group" (''A. cepa'' var. ''cepa'') and are usually referred to simply as "onions". The Aggregatum Group of cultivars (''A. cepa'' var. ''aggregatum'') includes both shallots and potato onions. The genus ''Allium'' also contains a number of other species variously referred to as onions and cultivated for food, such as the Japanese bunching onion (''A. fistulosum''), Egyptian onion (''A.'' ×''proliferum''), and Canada onion (''A. canadense''). ''Cepa'' is commonly accepted as Latin for "onion" and has an affinity with Ancient Greek: κάπια (''kápia'') and Albanian: ''qepë'' and is ancestral to Aromanian: ''tseapã'', Catalan: ''ceba'', Occitan: ''ceba'', Portuguese: ''cebola'', Spanish: ''cebolla'', Italian: ''cipolla'', and Romanian: ''ceapă''. The English word chive is also derived from the Old French ''cive'', which derived from ''cepa''.

The onion plant has been grown and selectively bred in cultivation for at least 7,000 years. It is a biennial plant, but is usually grown as an annual. Modern varieties typically grow to a height of . The leaves are yellowish- to bluish green and grow alternately in a flattened, fan-shaped swathe. They are fleshy, hollow, and cylindrical, with one flattened side. They are at their broadest about a quarter of the way up, beyond which they taper towards a blunt tip. The base of each leaf is a flattened, usually white sheath that grows out of the basal plate of a bulb. From the underside of the plate, a bundle of fibrous roots extends for a short way into the soil. As the onion matures, food reserves begin to accumulate in the leaf bases and the bulb of the onion swells.

In the autumn, the leaves die back and the outer scales of the bulb become dry and brittle, so the crop is then normally harvested. If left in the soil over winter, the growing point in the middle of the bulb begins to develop in the spring. New leaves appear and a long, stout, hollow stem expands, topped by a bract protecting a developing inflorescence. The inflorescence takes the form of a globular umbel of white flowers with parts in sixes. The seeds are glossy black and triangular in cross section. The average pH of an onion is around 5.5.

Because the wild onion is extinct and ancient records of using onions span western and eastern Asia, the geographic origin of the onion is uncertain, with likely domestication worldwide. Onions have been variously described as having originated in Iran, the western Indian subcontinent and Central Asia. 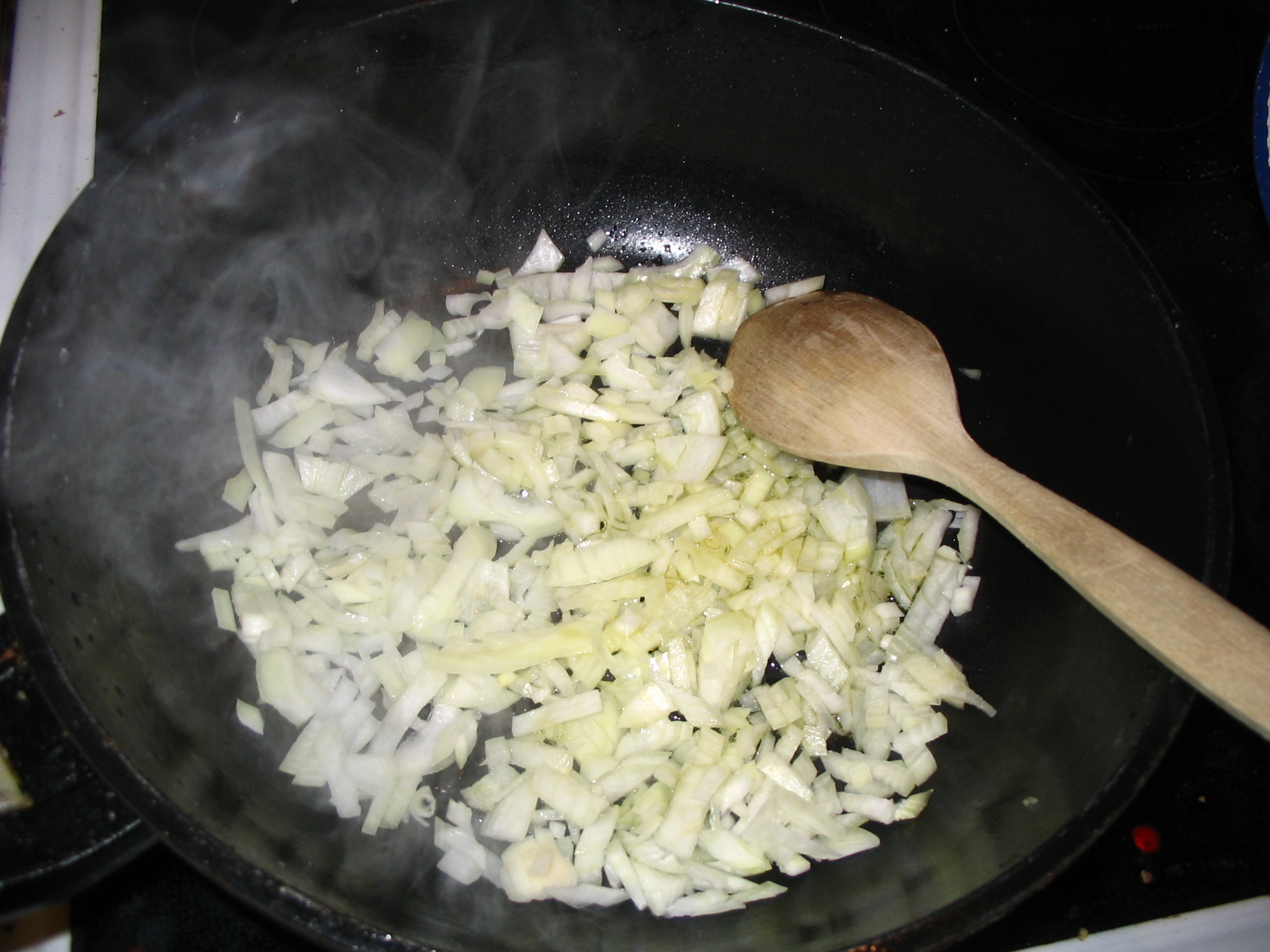