The Old Summer Palace, known in Chinese as Yuanming Yuan (), originally called the Imperial Gardens (), and sometimes called the Winter Palace, was a complex of palaces and gardens in present-day Haidian District, Beijing, China. It is northwest of the walls of the former Imperial City section of Beijing. Widely perceived as the pinnacle work of Chinese imperial garden and palace design, the Old Summer Palace was known for its extensive collection of gardens, its building architecture and numerous art and historical treasures. Constructed throughout the 18th and early 19th centuries, the Old Summer Palace was the main imperial residence of Qianlong Emperor of the Qing dynasty and his successors, and where they handled state affairs; the Forbidden City was used for formal ceremonies. It was reputed as the "Garden of Gardens" () in its heyday. In 1860, during the Second Opium War, as the Anglo-French expedition force steadily approached Beijing, two British envoys, a journalist for ''The Times'' and a small escort of British and Indian troopers were sent to meet Prince Yi under a flag of truce to negotiate a Qing surrender. Meanwhile, the French and British troops reached the palace. As news emerged that the negotiation delegation had been imprisoned and tortured, resulting in 20 deaths, the British High Commissioner to China, James Bruce, 8th Earl of Elgin, retaliated by ordering the complete destruction of the palace, which was then carried out by British troops. The palace was so large – covering more than – that it took 4,000 men 3 days of burning to destroy it. Many exquisite artworks – sculptures, porcelain, jade, silk robes, elaborate textiles, gold objects and more – were looted and are now found in 47 museums around the world, according to UNESCO. 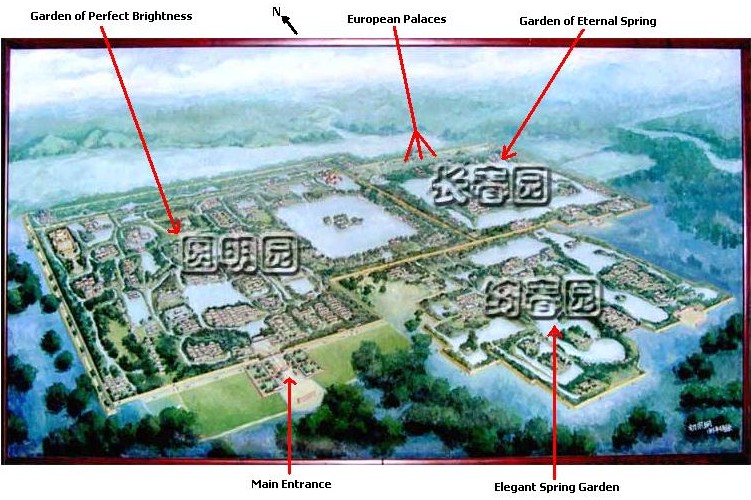 The Imperial Gardens at the Old Summer Palace were made up of three gardens: #Garden of Perfect Brightness () #Garden of Eternal Spring () #Garden of Elegant Spring () Together, they covered an area of , almost five times the size of the Forbidden City grounds and eight times the size of the Vatican City. Hundreds of structures, such as halls, pavilions, temples, galleries, gardens, lakes and bridges, stood on the grounds. In addition, hundreds of examples of Chinese artwork and antiquities were stored in the halls, along with unique copies of literary works and compilations. Several famous landscapes of southern China had been reproduced in the Imperial Gardens.

The palace was built on a site abundant in fresh water, near the Jade Spring Hill. The region was renowned for its beautiful landscape. Country homes were built here beginning in the 13th-century, during the rule of the Yuan dynasty, then in the 16th-century Li Wei of the Ming Dynasty built the ''Qinghua Yuan'' estate at the site.

The most visible architectural remains of the Old Summer Palace can be found in the Western mansions (Xiyang Lou) section of 18th-century European-style palaces, fountains and formal gardens. These structures, built partly of stone but mainly with a Chinese infrastructure of timber columns, coloured tiles and brick walls, were planned and designed by the Jesuit Giuseppe Castiglione with Michel Benoist responsible for the fountains and waterwork. Qianlong Emperor became interested in the architectural project after seeing an engraving of a European fountain, and employed Castiglione and Benoist to carry out the work to satisfy his taste for exotic buildings and objects. Western-style palaces, pavilion, aviaries, a maze, fountains, basins, and waterworks as well as perspective paintings organized as an outdoor theatre stage were constructed. A striking clock fountain was placed in front of the largest palace, the Haiyan Tang. The fountain had twelve animals of the Chinese zodiac that spouted water in turn every 2 hours, but all spouting water in concert at noon. These European-style buildings however only occupied an area along the back of the Garden of Eternal Spring that was small compared to the overall area of the gardens. More than 95% of the Imperial Gardens were made up of Chinese-style buildings. There were also a few buildings in Tibetan and Mongol styles, reflecting the diversity of the Qing Empire.

Initial construction of the Old Summer Palace began in 1707 during the reign of the Kangxi Emperor. It was intended as a gift for the emperor's fourth son, Prince Yong (the future Yongzheng Emperor), who would greatly expand the Imperial Gardens in 1725. The Yongzheng Emperor also introduced the waterworks of the gardens, creating lakes, streams and ponds to complement the rolling hills and grounds, and named 28 scenic spots within the garden. The Yongzheng Emperor also constructed a number of "living tableaux" he and his family could observe and interact with. One such scene was called "Crops as Plentiful as Fields" which involved court eunuchs pretending to be rural farmers on an island. Another was called the "Courtyard of Universal Happiness" which was a mock village where the imperial family could interact with shopkeepers, again eunuchs in disguise. During the Qianlong Emperor's reign, the second expansion was well underway and the number of scenic spots increased to 50 (the emperor personally directed the construction process). The splendors of the palace and the grounds were depicted in the ''Forty Scenes of the Yuanmingyuan'', an album produced in 1744 by the Qianlong Emperor's court painters. The construction of the European-style palaces was initiated in 1747. The last European appearance in the Old Summer Palace in the context of traditional Chinese imperial foreign relations was a diplomatic mission in 1795 representing the interests of the Dutch and Dutch East India Company. The Titsingh delegation included Isaac Titsingh, the Dutch-American Andreas Everardus van Braam Houckgeest, and the Frenchman Chrétien-Louis-Joseph de Guignes. Both published complementary accounts of the mission. Titsingh died before he could publish his version of the events. 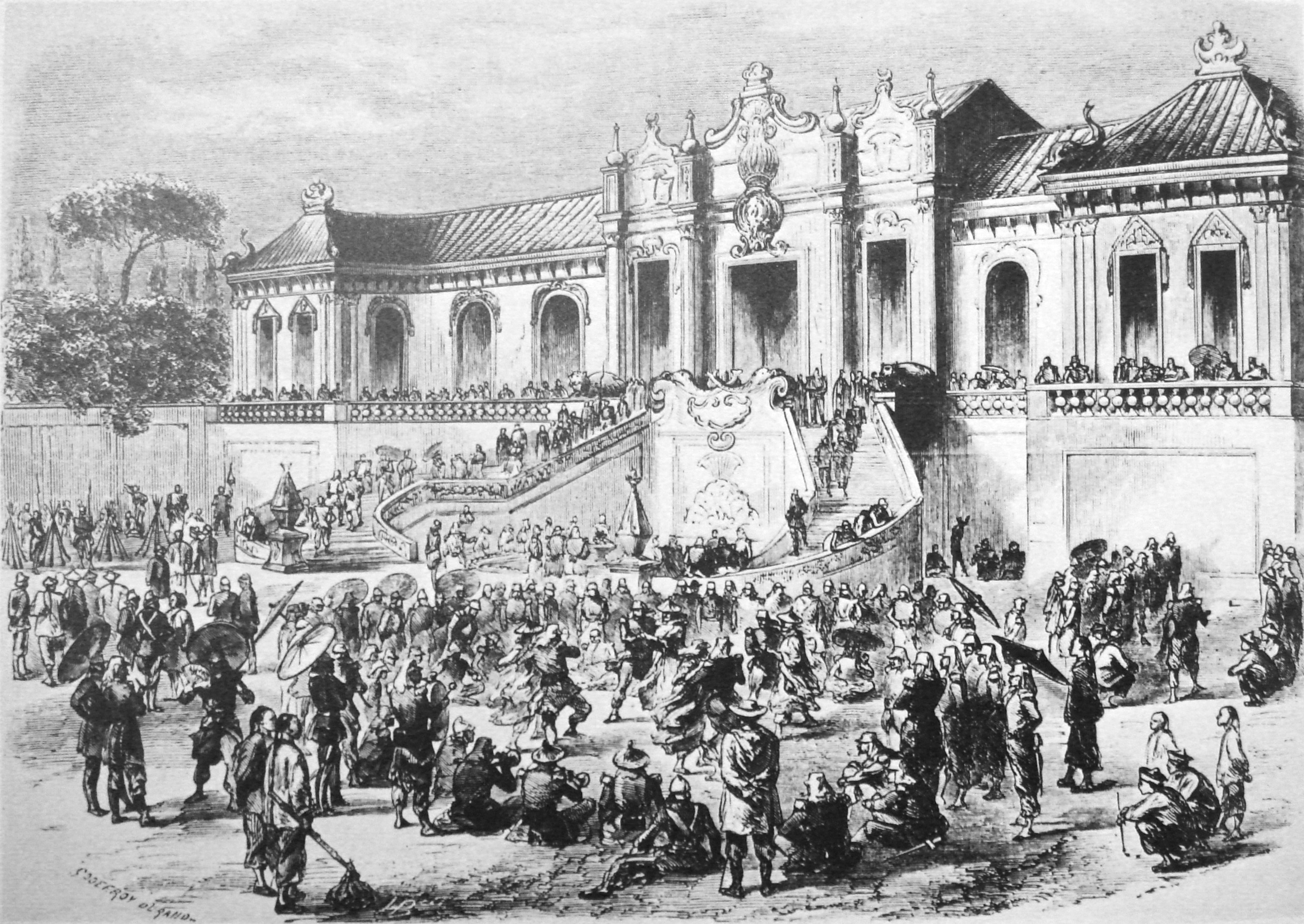 In 1860, during the Second Opium War, British and French expeditionary forces, having marched inland from the coast at Tianjin (Tientsin), arrived in Beijing (Peking). In mid-September, two envoys, Henry Loch and Harry Parkes went ahead of the main force under a flag of truce to negotiate with Prince Yi and representatives of the Qing Empire at Tongzhou (Tungchow). After a day of talks, they and their small escort of British and Indian troopers (including two British envoys and Thomas William Bowlby, a journalist for ''The Times'') were taken prisoner by the Qing general Sengge Rinchen. They were taken to the Ministry of Justice (or Board of Punishments) in Beijing, where they were confined and tortured. Parkes and Loch were returned after two weeks, with 14 other survivors. 20 British, French and Indian captives died. Their bodies were barely recognizable. On the night of 5 October, French units diverted from the main attack force towards the Old Summer Palace. At the time, the palace was occupied by only some eunuchs and palace maids; the Xianfeng Emperor and his entourage had already fled to the Chengde Mountain Resort in Hebei. Although the French commander Charles Cousin-Montauban assured his British counterpart, James Hope Grant, that "nothing had been touched", there was extensive looting by French and British soldiers. There was no significant resistance to the looting, even though many Qing soldiers were in the vicinity. On October 18, Lord Elgin, the British High Commissioner to China, retaliated against the Chinese resistance by ordering the destruction of the Old Summer Palace. Destroying the Old Summer Palace was also a warning to the Qing Empire not to use using kidnapping as a political tactic against Britain. It took 3,500 British troops to set the entire place ablaze, and the massive fire lasted for three days. Unknown to the troops, some 300 remaining eunuchs and palace maids, who concealed themselves from the intruders in locked rooms, perished with the burnt palace buildings. Only 13 buildings survived intact, most of them in the remote areas or by the lakeside. (The palace would be sacked once again and completely destroyed in 1900 when the forces of the Eight-Nation Alliance invaded Beijing.) Charles George Gordon, who was then a 27-year-old captain in the Royal Engineers and part of the 1860 Anglo-French expeditionary force, wrote about his experience: British and French looters preferred porcelain (much of which still graces British and French country houses