New Britain is a city in Hartford County, Connecticut, United States. It is located approximately southwest of Hartford. According to 2010 Census, the population of the city is 73,206. Among the southernmost of the communities encompassed within the Hartford-Springfield Knowledge Corridor metropolitan region, New Britain is home to Central Connecticut State University and Charter Oak State College. The city was noted for its industry during the 19th and early 20th centuries, and notable sites listed on the National Register of Historic Places include Walnut Hill Park developed by the landscape architect Frederick Law Olmsted and Downtown New Britain. The city's official nickname is the "Hardware City" because of its history as a manufacturing center and as the headquarters of Stanley Black & Decker. Because of its large Polish population, the city is often playfully referred to as "New Britski."

New Britain was settled in 1687 and then was incorporated as a new parish under the name New Britain Society in 1754. The name is a transfer from Great Britain. Chartered in 1850 as a township and in 1871 as a city, New Britain had separated from the nearby town of Farmington, Connecticut. A consolidation charter was adopted in 1905. During the early part of the 20th century, New Britain was known as the "Hardware Capital of the World", as well as "Hardware City". Major manufacturers, such as The Stanley Works, the P&F Corbin Company (later Corbin Locks), Landers, Frary & Clark (LF&C) and North & Judd, were headquartered in the city. 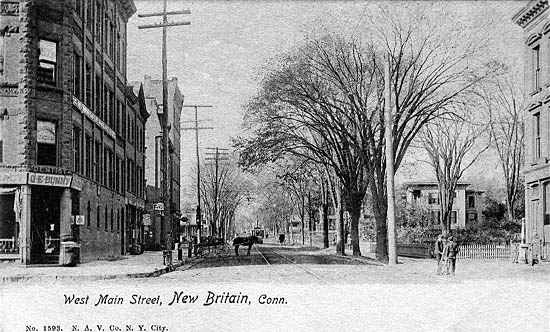 In 1843 Frederick Trent Stanley established Stanley's Bolt Manufactory in New Britain to make door bolts and other wrought-iron hardware. In 1857 his cousin Henry Stanley founded The Stanley Rule and Level Company in the city. Planes invented by Leonard Bailey and manufactured by the Stanley Rule and Level Company, known as "Stanley/Bailey" planes, were prized by woodworkers of the late 19th and early 20th centuries and remain popular among wood craftsmen today. The two companies merged in 1920, and the Stanley Rule and Level Company became the Hand Tools Division of Stanley Works. The wire coat hanger was invented in 1869 by O. A. North of New Britain. In 1895, the basketball technique of dribbling was developed at the New Britain YMCA. In 1938, New Britain High School competed in the high school football national championship game in Baton Rouge, Louisiana. 1954 saw the development of racquetball, also at the YMCA. Paul Manafort Sr., the father of Paul Manafort, was once the mayor of New Britain; the Manafort family had immigrated from Italy to New Britain prior to 1919. The heads of the fire and police departments and seven other municipal employees were arrested as part of a corruption scandal in the 1970s.

New Britain's motto, ' – translated from Latin – means "Industry fills the hive and enjoys the honey." This phrase was coined by Elihu Burritt, a 19th-century New Britain resident, diplomat, philanthropist and social activist. In 2007 it was reported that the Latin word for "honey" in the motto had been a typo for decades; it should be ', but it had long been misspelled as ''mele''. Former mayor William McNamara, who unsuccessfully tried to fix it during his term, suggested "to either fix the spelling immediately" or "switch to the English version of the motto." As controversy arose from the matter, the word was superseded with the correct spelling, '.

According to the United States Census Bureau, the city has a total area of 13.4 square miles (34.7 km), of which, 13.3 square miles (34.6 km) of it is land and 0.1 square miles (0.2 km) of it (0.52%) is water. New Britain's terrain is mostly made up of soft, rolling hills and young Connecticut forest. The many parks are populated with trees, and in small, undeveloped areas, there is also brushy woods. New Britain's streets also have many trees lining the sides of the roads. Many front yards in the northern half of the city have at least one tree. One or two streams flow through New Britain, undisturbed by the development.

In the 1960s various European ethnic groups had ethnic enclaves, including those from Ireland, Italy, Poland, and Ukraine.