Nelson is a city located in the Selkirk Mountains on the West Arm of Kootenay Lake in the Southern Interior of British Columbia, Canada. Known as "The Queen City", and acknowledged for its impressive collection of restored heritage buildings from its glory days in a regional silver rush, Nelson is one of the three cities forming the commercial and population core of the West Kootenay region, the others being Castlegar and Trail. The city is the seat of the Regional District of Central Kootenay. It is represented in the provincial legislature by the riding of Nelson-Creston, and in the Parliament of Canada by the riding of Kootenay—Columbia.

The western Kootenay region of British Columbia, where the city of Nelson is situated, is part of the traditional territories of the Sinixt (or Lakes) and Ktunaxa (Kutenai) peoples. Gold and silver were found in the area in 1867. Following the discovery of silver at nearby Toad Mountain in 1886, the town boomed quickly, leading to incorporation in 1897. Two railways were built to pass through Nelson. Due to its location near transportation corridors, Nelson grew to supply the local mining activity and soon became a transportation and distribution centre for the region. Nelson was named in 1888 after Hugh Nelson, then Lieutenant-Governor of British Columbia.

Francis Rattenbury, an architect most noted in British Columbia for the Parliament Buildings in Victoria, the Vancouver Provincial Courthouse, and the second Hotel Vancouver, designed chateau-style civic buildings made of granite, which stand today. By the 1900s, Nelson boasted several fine hotels, a Hudson's Bay Company store and an electric streetcar system. The local forestry and mining industries were well established. The town built its own hydroelectric generating system. English immigrants planted lakeside orchards, and Doukhobors from Russia, sponsored by Tolstoy and the Quakers, tilled the valley benchlands. The Doukhobor museum is located nearby, close to the neighbouring town of Castlegar. During the Vietnam War, many American draft evaders settled in Nelson and the surrounding area. This influx of liberal, mostly educated young people had a significant impact on the area's cultural and political demographics. Nelson's mountainous geography kept growth confined to the narrow valley bottom, except for certain hillside structures such as the local High School and the former Notre Dame University College (NDU) campus. Throughout the '60s and '70s, when more prosperous cities were tearing down and rebuilding their downtowns to the design of the time, Nelson merchants 'modernized' their buildings with covers of aluminum siding.

In the early 1980s, Nelson suffered a devastating economic downturn when the local Kootenay Forest Products sawmill was closed. Downtown merchants were already suffering from the opening of a large, regional shopping centre on Nelson's central waterfront, the Chahko Mika Mall. At the time, Victoria and Vancouver were experimenting with historical restorations of their oldest areas, with some success. To save downtown and Baker Street from blight, Nelson quickly followed suit, stripping aluminum facades and restoring the buildings to their original brilliance. Local designer Bob Inwood, one of Nelson's many American immigrants, played a major role as a consultant. By 1985, Baker Street was completely transformed. Affirmation of the street's success came in 1986 when Steve Martin chose to produce his feature film ''Roxanne'' largely in Nelson, using the local fire hall as a primary set and many historic locations for others. More broadly, the transformation marked the beginning of Nelson's ongoing transition from a resource-based town to an arts and tourism town. A walk down Baker Street through the Historic District is now one of Nelson's promoted visitor activities.

Nelson has a humid continental climate (Köppen ''Dfb'') with four distinct seasons. Winters are cold and snowy while summers are warm and drier with cool temperatures during the night.

Nelson has earned a reputation as a cultural centre. The downtown area is packed with good restaurants, cafes, coffee houses, local shops, small art galleries, the restored Capitol Theatre (a regional hub for the performing arts) and impromptu theatre venues. The city is about forty-five minutes away from the site of the annual Shambhala Music Festival, an internationally known artistic music festival held in August at the Salmo River Ranch. It is also home to the Whitewater Ski Resort and the Nelson Brewing Company (a regional microbrewery). As with many communities in British Columbia, Nelson experienced a real-estate boom. In the early 2000s, real-estate prices skyrocketed, putting ownership out of reach for less affluent residents. Nelson has remained relatively free of the chain stores, franchises and strip-mall developments that are common in other towns of similar size, which lends to a distinct townscape. For its geographic scale, the Central Kootenay region (in which Nelson is situated) has an uncommonly high number of organic farms, market gardens, and home gardens. Many Nelson residents grow decorative or food gardens (or both). Nelson has several retail outlets for natural foods, including a year-round market specializing in these products. According to journalist Bill Metcalfe, the Kootenay Country Co-op is “the largest independent member-owned natural food store in Canada and a respected player nationally in organic retail circles.” The Save-On-Foods in Nelson is that company's leading store for organic and natural foods. Nelson has been noted for its illegal marijuana production, with ''The Guardian'' reporting in 2010 that:

Nelson was able to make the transition from a typical rural lumber town into a thriving arts and mountain sports hotbed, due in part to the wealth generated by marijuana growers. If one were to have spent the last three years in this idyllic mountain hamlet, the economic crisis would have been barely noticeable. 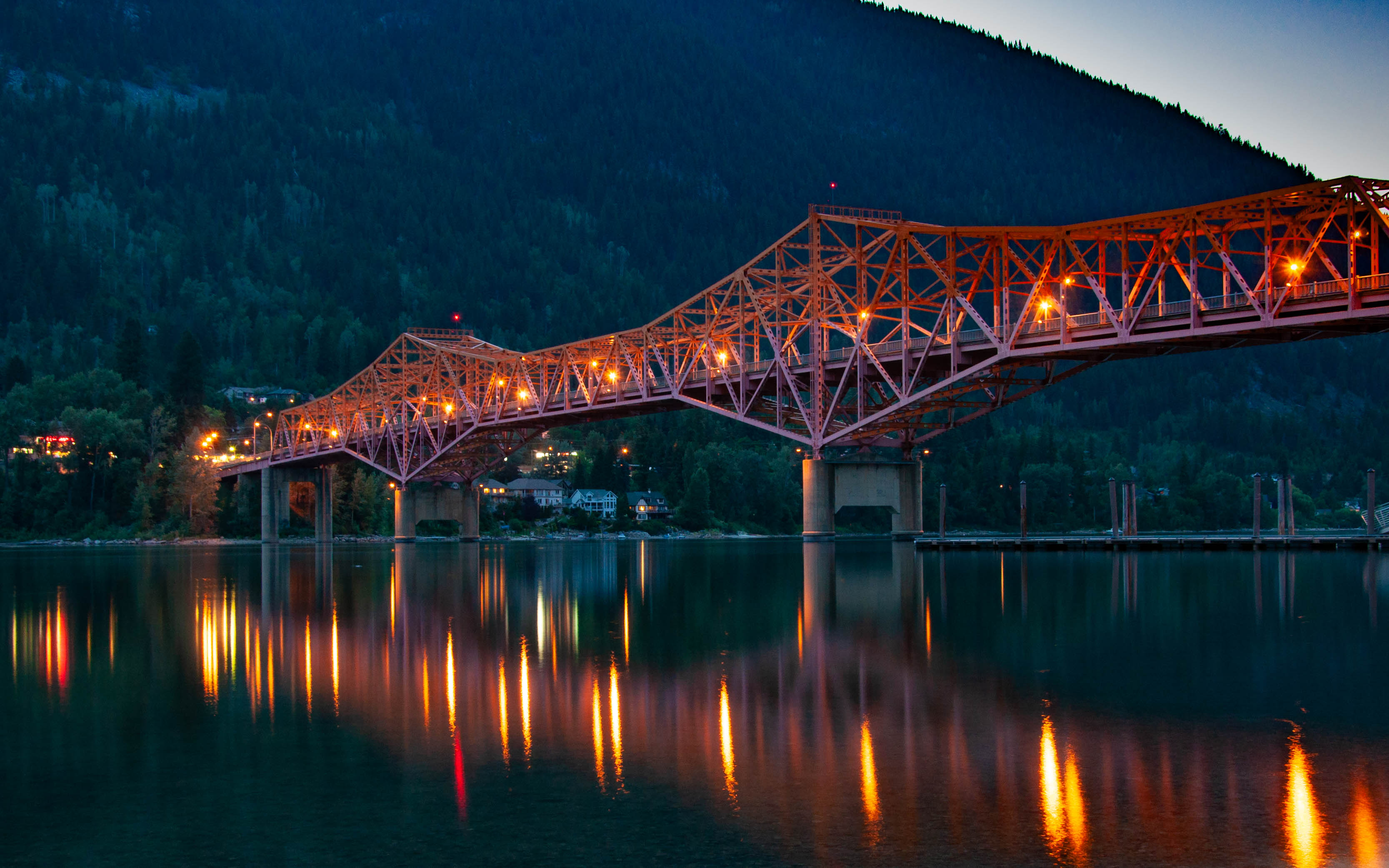 Highways 3A and 6 pass through Nelson, while a scheduled commercial airline service is available at the West Kootenay Regional Airport, approximately southwest of the city. Nelson Airport is several blocks away from downtown Nelson. Public transit in Nelson is provided by the West Kootenay Transit System, which runs several routes within the city and to neighbouring communities. Both Level 2 and Level 3 (DC fast-charging) electric vehicle charging stations have been installed in the city. A carsharing service is available in the city through the Kootenay Carshare Co-operative.

Set in the Selkirks, a number of artists and writers make Nelson their home. Nelson is highlighted as the "Number One Small Town Arts Community in Canada" by the publisher of The 100 Best Small Arts Towns in America, and is home to a large and diverse artisan community. The annua
Artwalk
a display of artwork at various venues around town, features local talent. July, August and September mark three months of exhibitions throughout the downtown core in variety of galleries and local businesses. Each month has a separate grand opening, (usually the first Friday evening of the month), which includes refreshments, musicians, pan-handlers and artwork for locals and visitors to enjoy as they stroll through downtown Nelson.

The Cottonwood Community Market, located at Cottonwood Falls Park, takes place every Saturday from May through October. The Downtown Local Market happens on Baker Street every Wednesday from June through September. Marketfest, a lively nighttime street market in the heart of Nelson's downtown, happens on the last Friday of the month in June, July, and August. The markets all offer regional farm produce, delicious foods, and a variety of locally hand-crafted products. Two local hiking trails are popular. The Pulpit Rock Trail offers a short but somewhat challenging hike that ends with a view of the city. After Pulpit Rock the trail continues up the spine of Elephant Mountain (as the locals call it) to more postcard views, and eventually to the radio towers which are visible from everywhere in the city. Hikers venturing beyond Pulpit Rock should have basic wilderness gear and exercise common sense. Public access to the Pulpit Rock trail has been restored with the opening, in the spring of 2009, of a new access point several hundred metres west of the old trail head, which was on private land. In the winter, skiing and snowboarding are Nelson's primary outdoor activities. Thirty minutes south of town is the Whitewater Ski Resort, which provides access, (via one triple chairlift, one double chairlift, one quad chairlift, and a handle tow), to of beginner to advanced terrain. The resort also provides access to hundreds of kilometres of off-piste skiing and back country touring. In 2012 Nelson and Rossland, a small city southwest of Nelson, were jointly voted the best ski locales in North America by the readers of California-based ''Powder'' magazine. Mountain biking is part of the local culture, and Nelson offers a wide variety of MTB-oriented trails for all experience levels. Rock climbing is also a popular summer activity. Kootenay Crag, Hall Siding, Grohman Narrows and CIC Bluffs are popular city crags. Slocan Bluffs and Kinnaird are in nearby Slocan City and Castlegar. 2003 saw bouldering take off in Nelson, with extensive new development of bouldering areas in Grohman Narrows and nearby Robson. Nelson is also located close to Kokanee Glacier Provincial Park. On January 13, 2007, Nelson was the broadcast location for the annual ''Hockey Day in Canada'' special.