Nebraska is a state in the Midwestern region of the United States. It is bordered by South Dakota to the north; Iowa to the east and Missouri to the southeast, both across the Missouri River; Kansas to the south; Colorado to the southwest; and Wyoming to the west. It is the only triply landlocked U.S. state. Indigenous peoples, including Omaha, Missouria, Ponca, Pawnee, Otoe, and various branches of the Lakota (Sioux) tribes, lived in the region for thousands of years before European exploration. The state is crossed by many historic trails, including that of the Lewis and Clark Expedition. Nebraska's area is just over with a population of almost 1.9 million. Its capital is Lincoln, and its largest city is Omaha, which is on the Missouri River. Nebraska was admitted into the United States in 1867, two years after the end of the American Civil War. The Nebraska Legislature is unlike any other American legislature in that it is unicameral, and its members are elected without any official reference to political party affiliation. Nebraska is composed of two major land regions: the Dissected Till Plains and the Great Plains. The Dissected Till Plains region consists of gently rolling hills and contains the state's largest cities, Omaha and Lincoln. The Great Plains region, occupying most of western Nebraska, is characterized by treeless prairie. Nebraska has two major climatic zones. The eastern half of the state has a humid continental climate (Köppen climate classification ''Dfa''); a unique warmer subtype considered "warm-temperate" exists near the southern plains, which is analogous to that in Kansas and Oklahoma, which have a predominantly humid subtropical climate. The western half of the state has a primarily semi-arid climate (Köppen ''BSk''). The state has wide variations between winter and summer temperatures, variations that decrease moving south within the state. Violent thunderstorms and tornadoes occur primarily during spring and summer and sometimes in autumn. Chinook wind tends to warm the state significantly in the winter and early spring.

Nebraska's name is the result of anglicization of the archaic Otoe words ''Ñí Brásge'', pronounced (contemporary Otoe ''Ñí Bráhge''), or the Omaha ''Ní Btháska'', pronounced , meaning "flat water", after the Platte River which flows through the state. 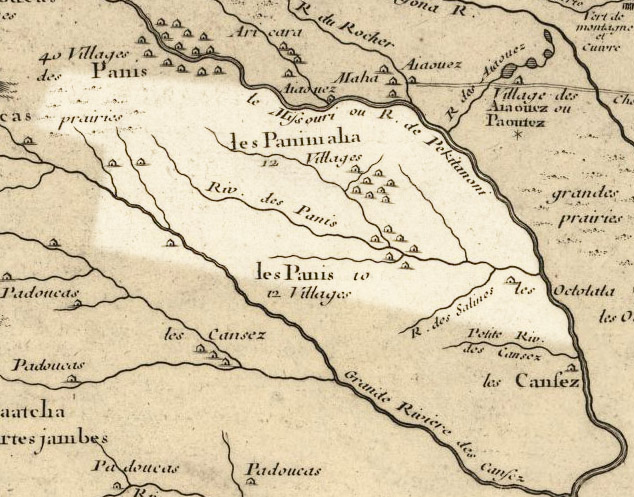 Indigenous peoples lived in the region of present-day Nebraska for thousands of years before European colonization. The historic tribes in the state included the Omaha, Missouria, Ponca, Pawnee, Otoe, and various branches of the Lakota (Sioux), some of which migrated from eastern areas into this region. When European exploration, trade, and settlement began, both Spain and France sought to control the region. In the 1690s, Spain established trade connections with the Apaches, whose territory then included western Nebraska. By 1703, France had developed a regular trade with the native peoples along the Missouri River in Nebraska, and by 1719 had signed treaties with several of these peoples. After war broke out between the two countries, Spain dispatched an armed expedition to Nebraska under Lieutenant General Pedro de Villasur in 1720. The party was attacked and destroyed near present-day Columbus by a large force of Pawnees and Otoes, both allied with the French. The massacre ended Spanish exploration of the area for the remainder of the 18th century. In 1762, during the Seven Years' War, France ceded the Louisiana territory to Spain. This left Britain and Spain competing for dominance along the Mississippi; by 1773, the British were trading with the native peoples of Nebraska. In response, Spain dispatched two trading expeditions up the Missouri in 1794 and 1795; the second, under James Mackay, established the first European settlement in Nebraska near the mouth of the Platte. Later that year, Mackay's party built a trading post, dubbed Fort Carlos IV (Fort Charles), near present-day Homer.