Nanchang is the capital and largest city of Jiangxi Province, People's Republic of China. As of November 2017, the total population in Nanchang City was 5,246,600, while the built-up (''or metro'') area made of 6 urban districts plus Nanchang county is home to more than 4,300,000 inhabitants. Located in the north-central part of the province and in the hinterland of Poyang Lake Plain, it is bounded on the west by the Jiuling Mountains, and on the east by Poyang Lake. Because of its strategic location connecting the prosperous East and South China, it has become a major railway hub in Southern China in recent decades. As the Nanchang Uprising in 1927 is distinctively recognized by the ruling Communist Party as "firing the first gunshot against the evil Nationalists", the current government has therefore named the city since 1949 "the City of Heroes", "the place where the People's Liberation Army was born", and the most widely known "place where the military banner of the People's Liberation Army was first raised". Nanchang is also a major city, appearing among the top 200 cities in the world by scientific research outputs, as tracked by the Nature Index and home to Nanchang University, the key national university of “Project 211” in the city. 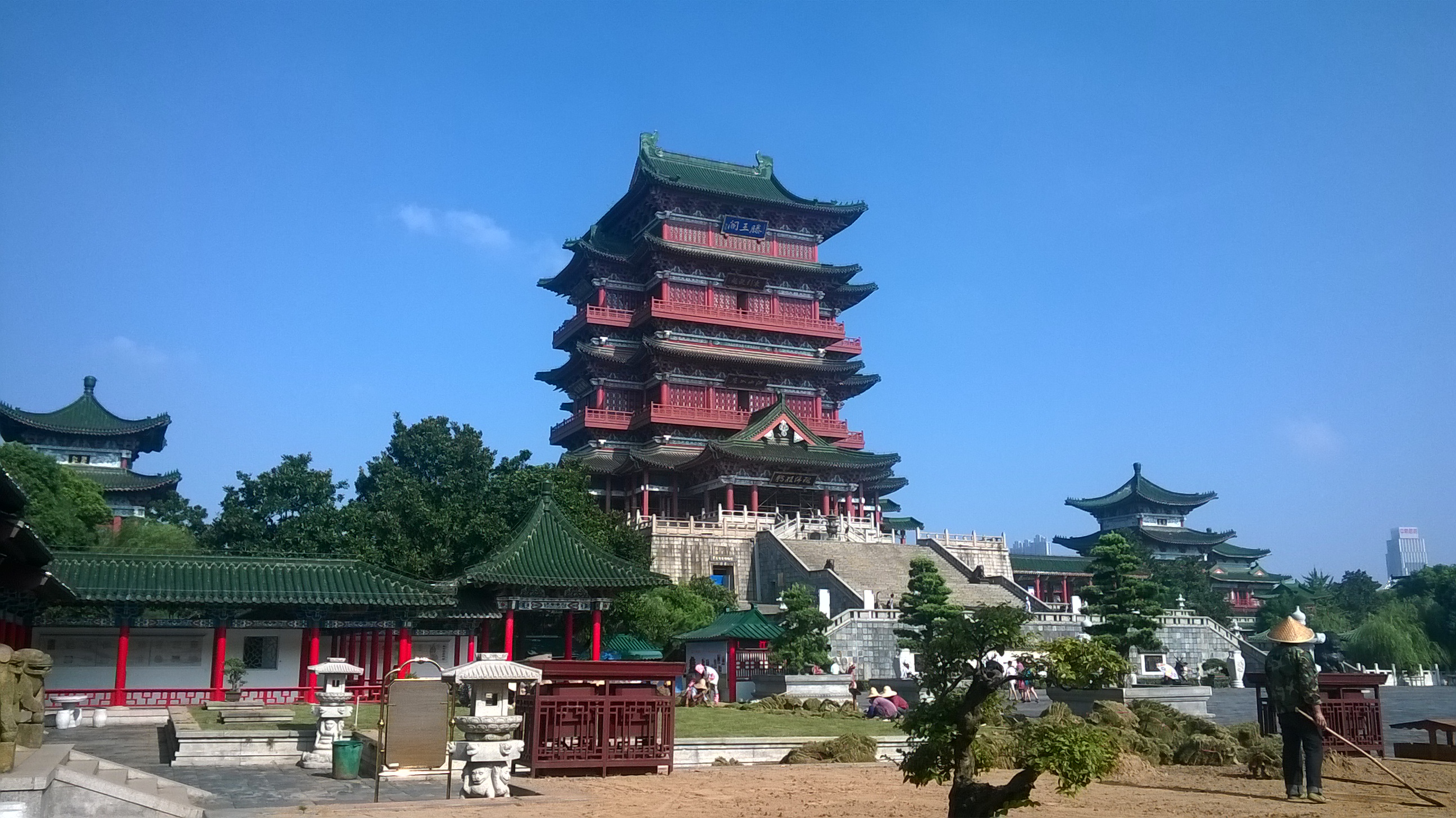 The territories encompassing modern-day Jiangxi Province—including Nanchang—was first incorporated into China during the Qin dynasty, when it was conquered from the Baiyue peoples and organized as Jiujiang Commandery (). In 201 BC, during the Han dynasty, the city was given the Chinese name Nanchang and became the administrative seat of Yuzhang Commandery (), and was governed by Guan Ying, one of Emperor Gaozu of Han's generals. The name Nanchang means "southern flourishing", derived from a motto of developing what is now southern China that is traditionally attributed to Emperor Gaozu himself. In AD 589, during the Sui dynasty, this commandery was changed into a prefecture named Hongzhou (), and after 763 it became the provincial center of Jiangxi, which was then beginning the rapid growth that by the 12th century made it the most populous province in China. In 653 the Tengwang Pavilion was constructed, and in 675 Wang Bo wrote the classic "Tengwang Ge Xu", a poetic introductory masterpiece celebrating the building, making the building, the city, and the author himself known to literate Chinese-speaking population ever since. The Pavilion has been destroyed and rebuilt several times throughout history. Its present form was reconstructed in the 1980s after being destroyed in 1929 during the Chinese Civil War. In 959, under the Southern Tang regime, Nanchang was made superior prefecture and the southern capital. After the conquest by the Song regime in 981 it was reverted to the name Hongzhou. In 1164 it was renamed Longxing prefecture, which name it retained until 1368. During the Yuan dynasty it was the capital of Jiangxi Province, an area that included Guangdong as well. At the end of the Yuan (Mongol) period (1279–1368), it became a battleground between Zhu Yuanzhang, the founder of the Ming dynasty (1368–1644), and the rival local warlord, Chen Youliang. At the beginning of the 16th century it was the power base from which Zhu Chenhao, the Prince of Ning, launched a rebellion against the emperor. During the Yuan Dynasty, it might have been the centre of porcelain trade During the reign of the Wanli Emperor of the Ming dynasty, it housed relatives of the emperor who had been exiled because they were potential claimants of the imperial throne, members of the imperial family constituting about one quarter of the city's population; as a result of this, Matteo Ricci came here when trying to gain entry to Beijing. In the 1850s it suffered considerably as a result of the Taiping Rebellion (1850–64), and its importance as a commercial centre declined as the overland routes to Canton were replaced by coastal steamship services in the latter half of the 19th century. Nanchang has, however, remained the undisputed regional metropolis of Jiangxi. On August 1, 1927, Nanchang was the site of one of a series of insurrections organized by the communists. The Nanchang Uprising, led by pro-communist Kuomintang officers under Russian direction, succeeded in holding the city for only a few days, and provided a core of troops and a method of organization from which the People's Liberation Army (PLA) later developed. In 1939, the Battle of Nanchang, a ferocious battle between the Chinese National Revolutionary Army and the Imperial Japan Army in the Second Sino-Japanese War took place. By 1949 Nanchang was still essentially an old-style administrative and commercial city, with little industry apart from food processing; it had a population of about 275,000. Nanchang first acquired a rail connection in 1915, only connecting to the port city of Jiujiang by the Yangtze. Several other rail links have since been opened. After World War II a line was completed to Linchuan and Gongqi in the Ru River Valley to the south-southeast. Since 1949 Nanchang has been extensively industrialized. It is now a large-scale producer of cotton textiles and cotton yarn. Paper making is also a major industry, as is food processing (especially rice milling). Heavy industry began to gain prominence in the mid-1950s. A large thermal-power plant was installed and uses coal brought by rail from Fengcheng to the south. A machinery industry also grew up, at first mainly concentrating on the production of agricultural equipment and diesel engines. Nanchang then became a minor centre of the automotive industry in China, producing trucks and tractors and also accessories such as tires. An iron-smelting plant helping to supply local industry was installed in the later 1950s. There is also a large chemical industry, producing agricultural chemicals and insecticides as well as pharmaceuticals.

Nanchang is located in inland southeastern China, south of the Yangtze River and is situated on the right bank of the Gan River just below its confluence with the Jin River and some southwest of its discharge into Poyang Lake.

Nanchang has a monsoon-influenced humid subtropical climate (Köppen ''Cfa'') with four distinct seasons. Winters are short and cool with occasional frosts; it begins somewhat sunny and dry but becomes progressively wetter and more overcast. Spring begins especially gloomy, and from April to June, each month has more than of rainfall. Summer is long and humid, with amongst the highest temperatures of any Chinese provincial capital, and with the sun shining close to 60 percent of the time in July and August, is the sunniest time of year. Autumn is warm to mild with the lowest rainfall levels of the year. The monthly 24-hour average temperature ranges from in January to in July, while the annual mean is . Annual precipitation stands at around ; with monthly percent possible sunshine ranging from 23 percent in March to 60 percent in August, the city receives 1,832 hours of sunshine annually in average. Extremes since 1951 have ranged from on 29 December 1991 to on 23 July 1961.

(Census), Nanchang had a population of 5,042,565, of which 4,171,926 million lived in built-up (urbanized) area consisting of 6 urban districts plus Nanchang County largely being urbanized. 37 ethnic groups were counted amongst its prefecture divisions. According to the Statistical Communique of the National Bureau of Statistics and Statistics of Nanchang City in 2017, as of the end of November 2017, the total population of households in Nanchang City was 5,246,600. The urban population was 2,887,800.

* Honggutan New District () is an economic management area and not a formal administrative division.

Nanchang has an advantageous geographic location and convenient transportation. It is praised as the “three rivers and five lakes, and the control of the finer and better lakes”. It relies on high-speed railways and aviation hubs to connect three important economic circles (Yangtze River Delta, Pearl River Delta, Inter-provincial traffic corridors in Haixi District). Nanchang is one of the country's comprehensive transportation hubs and one of the most important integrated transportation hubs in Jiangxi.

The Nanchang is an important rail hub for southeastern China. The Beijing–Kowloon (Jingjiu) Railway, Shanghai–Kunming railway (formerly Zhejiang–Jiangxi or Zhegan Railway), Xiangtang–Putian railway and Nanchang–Jiujiang intercity railway converge in Nanchang. Nanchang's Bureau of Railways operates much of the railway network in Jiangxi and neighbouring Fujian province. The Nanchang railway station and the Nanchang West railway station are the primary passenger rail stations of the city. Nanchang is connected to Hangzhou, Changsha and Shanghai via CRH (China Railway High-speed) service.

Nanchang Changbei International Airport (KHN) built in 1996 is the main international airport. It is situated in Lehua Town, 26 kilometres north of the CDB area. Changbei International Airport is the only one in Jiangxi Province which has an international air route. The airport is connected to major mainland cities such as Shenzhen, Guangzhou, Haikou, Shanghai and Beijing. There is a military/mixed airport near Liantang, Nanchang County. Nanchang Changbei International Airport is the largest airport in Jiangxi Province. In 2014, Nanchang Changbei Airport opened up to 10 international destinations. The airport handled 7.25 million passengers in 2014, an increase of 6.3%. Among them, the Nanchang aviation port exceeded 280,000 passengers, an increase of nearly 40%, becoming the airport's traffic volume. The important force of growth, and will continue to maintain rapid development. On December 6, 2017, the annual passenger throughput of Nanchang Airport exceeded 10 million passengers, making it the nation's 31st “million-grade airport”. In 2017, passenger throughput reached 10.93 million, a year-on-year increase of 39.0%, a net increase of passenger throughput of 3.07 million passengers; flights took off and 89,000 vehicles, a year-on-year increase of 35.2%; and cargo and mail throughput of 52,000 tons, an increase of 3.3%. In order to cooperate with the construction of the Beijing-Kowloon high-speed railway and Nanchang North Station airport complex transportation hub, large-scale expansion and upgrades are being carried out recently.

The road transport infrastructure in Nanchang is extensive. A number of national highways cross through the city. They are the National roads No.105 from Beijing to Zhuhai, No.320 from Shanghai to Kunming, and No.316 from Fuzhou to Lanzhou. The major transport companies that operate in Nanchang are the Chang'an Transport Company Limited, the Nanchang Long-distance Bus Station, and the Xufang Bus Station. National Highway G70 crosses through Nanchang. Nanchang also built its round-city highway G70_01 opening in 2007. The Nanchang Long-distance Bus Station serves long-distance routes to Nanjing, Shenzhen, Hefei and other cities outside Jiangxi Province. The Xufang Bus Station operates routes to cities, towns and counties within Jiangxi Province.

Nanchang Rail Transit is the first rail transportation system in Jiangxi Province, the world's leading MRT system, the second batch of rail transit cities in China. It will connect Nanchang's main downtown area and each satellite city, the Nanchang Metro has been in service since 26th Dec 2015. Nanchang is the 25th city in mainland China to put into operation. The planning of Nanchang rail transit project started in 1999 and was officially started in 2009. The first phase of the No. 1 and No. 2 lines was 50,996 kilometers (the first line is the underground line). Line 1 was officially opened and operated at the end of 2015, and Line 2 of the “First Section” began trial operation on August 19, 2017.

Nanchang is situated on the Gan River, the Fu River, Elephant Lake, Qingshan Lake, and Aixi Lake. Hence the water routes for Nanchang are critically important for the economy, trade and shipping. Nanchang Port is the biggest port on the Gan River. Passengers can take Nanchang Port and travel by boat to the Jinggang Shan and Tengwang Pavilion. There are passenger ships that also visit Poyang Lake, Stone Bell Hill, Poyang Lake Bird Protection Area, Dagu Hill and other attractions.

* Tengwang Pavilion, a towering pavilion dating to 653, on the east bank of the Gan River and is one of "the Four Great Towers of China" * Poyang Lake, the largest fresh water lake in China, it is also called "the Migrator Birds Paradise". * Star of Nanchang, which was the world's tallest Ferris wheel from 2006–2008, in Honggu New District * Qiushui Square, established on 28 January 2004 with the largest music fountain group with music in Asia. * Jiangxi Provincial Museum and Bada Shanren Exhibition Hall * People's Park, the largest park in downtown Nanchang *Bayi Square and Memorial, at the center of Nanchang, commemorates the founding of the People's Liberation Army during the Nanchang Uprising of 1 August (Ba Yi in Mandarin) in 1927, which led to the formation of the People's Republic of China in 1949.

Nanchang is the site of Jiangxi International Women's Tennis Open.