Click Here for Items Related To - Names of Vietnam


Throughout history, there were many names used to refer to Vietnam. 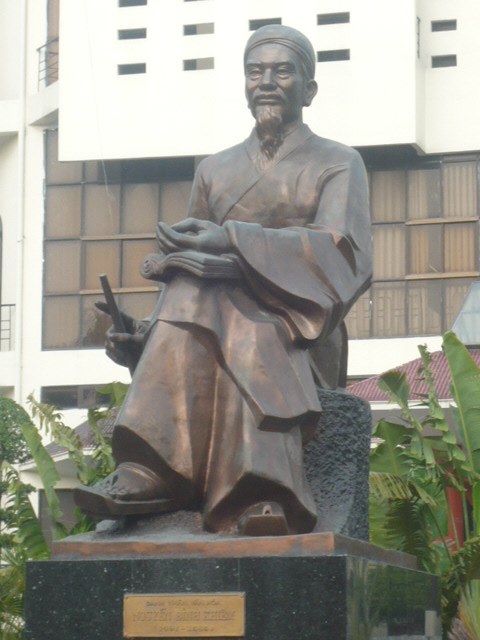 Throughout history of Vietnam, besides official names, there are names that are used unofficially to refer to the territory of Vietnam. Vietnam was ever called Văn Lang during the Hùng Vương Dynasty, Âu Lạc when An Dương was king, Nam Việt during the Triệu Dynasty, Van Xuan during the Anterior Lý Dynasty, Đại Cồ Việt during the Đinh dynasty and Early Lê dynasty. Starting in 1054, Vietnam was called Đại Việt (Great Viet). During the Hồ dynasty, Vietnam was called Đại Ngu. Việt Nam ( in Vietnamese) is a variation of Nam Việt (Southern Việt), a name that can be traced back to the Triệu dynasty (2nd century BC, also known as Nanyue Kingdom). The word "Việt" originated as a shortened form of Bách Việt, a word used to refer to a people who lived in what is now southern China in ancient times. The word "Việt Nam", with the syllables in the modern order, first appears in the 16th century in a poem by Nguyễn Bỉnh Khiêm. "Annam", which originated as a Chinese name in the seventh century, was the common name of the country during the colonial period. Nationalist writer Phan Bội Châu revived the name "Vietnam" in the early 20th century. When rival communist and anti-communist governments were set up in 1945, both immediately adopted this as the country's official name. In English, the two syllables are usually combined into one word, "Vietnam". However, "Viet Nam" was once common usage and is still used by the United Nations and by the Vietnamese government.

200px|Courtesy seal of Nguyễn lord, gift of emperor [[Lê Hy Tông, dated 1709, inscribed with Chinese characters meaning ''Đại Việt quốc Nguyễn chúa vĩnh trấn chi bảo'' The term "" (Yue) () in [[Early Middle Chinese was first written using the [[logogram|logograph "戉" for an axe (a homophone), in [[oracle bone and bronze inscriptions of the late [[Shang dynasty ( BC), and later as "越". At that time it referred to a people or chieftain to the northwest of the Shang. In the early 8th century BC, a tribe on the middle Yangtze were called the Yangyue, a term later used for peoples further south. Between the 7th and 4th centuries BC Yue/Việt referred to the State of Yue in the lower Yangtze basin and its people. From the 3rd century BC the term was used for the non-Chinese populations of south and southwest China and northern Vietnam, with particular states or groups called Minyue, Ouyue, Luoyue (Vietnamese: Lạc Việt), etc., collectively called the Baiyue (Bách Việt, ; ). The term Baiyue/Bách Việt first appeared in the book ''Lüshi Chunqiu'' compiled around 239 BC. In 207 BC, former Qin dynasty general Zhao Tuo/Triệu Đà founded the kingdom Nanyue/Nam Việt () with its capital at Panyu (modern Guangzhou). This kingdom was "southern" in the sense that it was located south of other Baiyue kingdoms such as Minyue and Ouyue, located in modern Fujian and Zhejiang. Several later Vietnamese dynasties followed this nomenclature even after these more northern peoples were absorbed into China. In 968, the Vietnamese leader Đinh Bộ Lĩnh established the independent kingdom of Đại Cồ Việt (The Vietnamese synonym ''cồ'' was reproduced in nom script, also mean "great") over the former Jinghai state. In 1054, king Ly Thanh Tong shortened the kingdom name to Đại Việt ("Great Viet"). However the names Giao Chỉ and An Nam still were the widely known names that foreigners used to refer the state of Đại Việt during medieval and early modern periods,. For examples, ''Caugigu'' (Italian); ''Kafjih-Guh'' (Arabic: كوة ك); ''Koci'' (Malay); ''Cauchy'' (Portuguese); ''Cochinchina'' (English); ''Annam'' (Dutch, Portuguese, Spanish and French). In 1787, US politician Thomas Jefferson referred Vietnam as ''Cochinchina'' for the purpose of trading for rice. In "Sấm Trạng Trình" (The Prophecies of Trạng Trình), poet Nguyen Binh Khiêm (1491–1585) reversed the traditional order of the syllables and put the name in its modern form: "Vietnam is being created" (). At this time, the country was divided between the Trịnh lords of Hanoi and the Nguyễn lords of Huế. By combining several existing names, Nam Việt, Annam (Pacified South), Đại Việt (Great Việt), and "Nam quốc" (southern nation), Khiêm could create a new name that referred to an aspirational unified state. The word "nam" no longer implies Southern Việt, but rather that Vietnam is "the South" in contrast to China, "the North". This explanation is implied by Lý Thường Kiệt in the poem "Nam quốc sơn hà" (1077): "Over the mountains and rivers of the South, reigns the emperor of the South." Researcher Nguyễn Phúc Giác Hải found the word 越南 "Việt Nam" on 12 steles carved in the 16th and 17th centuries, including one at Bảo Lâm Pagoda, Haiphong (1558). Nguyễn Phúc Chu (1675–1725) used the word in a poem: "This is the most dangerous mountain in Vietnam" (). It was used as an official national name by Emperor Gia Long in 1804-1813. The Vietnamese asked permission from the Qing dynasty to change the name of their country. Originally, Gia Long had wanted the name Nam Việt and asked for his country to be recognized as such, but the Jiaqing Emperor refused since the ancient state of the same name had ruled territory that was part of the Qing dynasty. The Jiaqing Emperor refused Gia Long's request to change his country's name to Nam Việt, and changed the name instead to Việt Nam. Gia Long's Đại Nam thực lục contains the diplomatic correspondence over the naming. In his account about the meeting with Vietnamese officials in Hue on January 17, 1832, Edmund Roberts, American embassy in Vietnam, wrote: "Trung Quốc" 中國, or the 'Middle Country', was also used as a name for Vietnam by Gia Long in 1805. Minh Mang used the name "Trung Quốc" 中國 to call Vietnam. Vietnamese Nguyen Emperor Minh Mạng sinicized ethnic minorities such as Cambodians, claimed the legacy of Confucianism and China's Han dynasty for Vietnam, and used the term Han people 漢人 to refer to the Vietnamese. Minh Mang declared that "We must hope that their barbarian habits will be subconsciously dissipated, and that they will daily become more infected by Han ino-Vietnamesecustoms." This policies were directed at the Khmer and hill tribes. The Nguyen lord Nguyen Phuc Chu had referred to Vietnamese as "Han people" in 1712 when differentiating between Vietnamese and Chams. Chinese clothing was forced on Vietnamese people by the Nguyễn. The use of "Vietnam" was revived in modern times by nationalists including Phan Bội Châu, whose book ''Việt Nam vong quốc sử'' (History of the Loss of Vietnam) was published in 1906. Chau also founded the Việt Nam Quang Phục Hội (Vietnam Restoration League) in 1912. However, the general public continued to use Annam and the name "Vietnam" remained virtually unknown until the Yên Bái mutiny of 1930, organized by the Việt Nam Quốc Dân Đảng (Vietnamese Nationalist Party). By the early 1940s, the use of "Việt Nam" was widespread. It appeared in the name of Ho Chi Minh's Viet Nam Doc Lap Dong Minh Hoi (Viet Minh), founded 1941, and was even used by the governor of French Indochina in 1942. The name "Vietnam" has been official since 1945. It was adopted in June by Bảo Đại's imperial government in Huế, and in September by Ho's rival communist government in Hanoi. 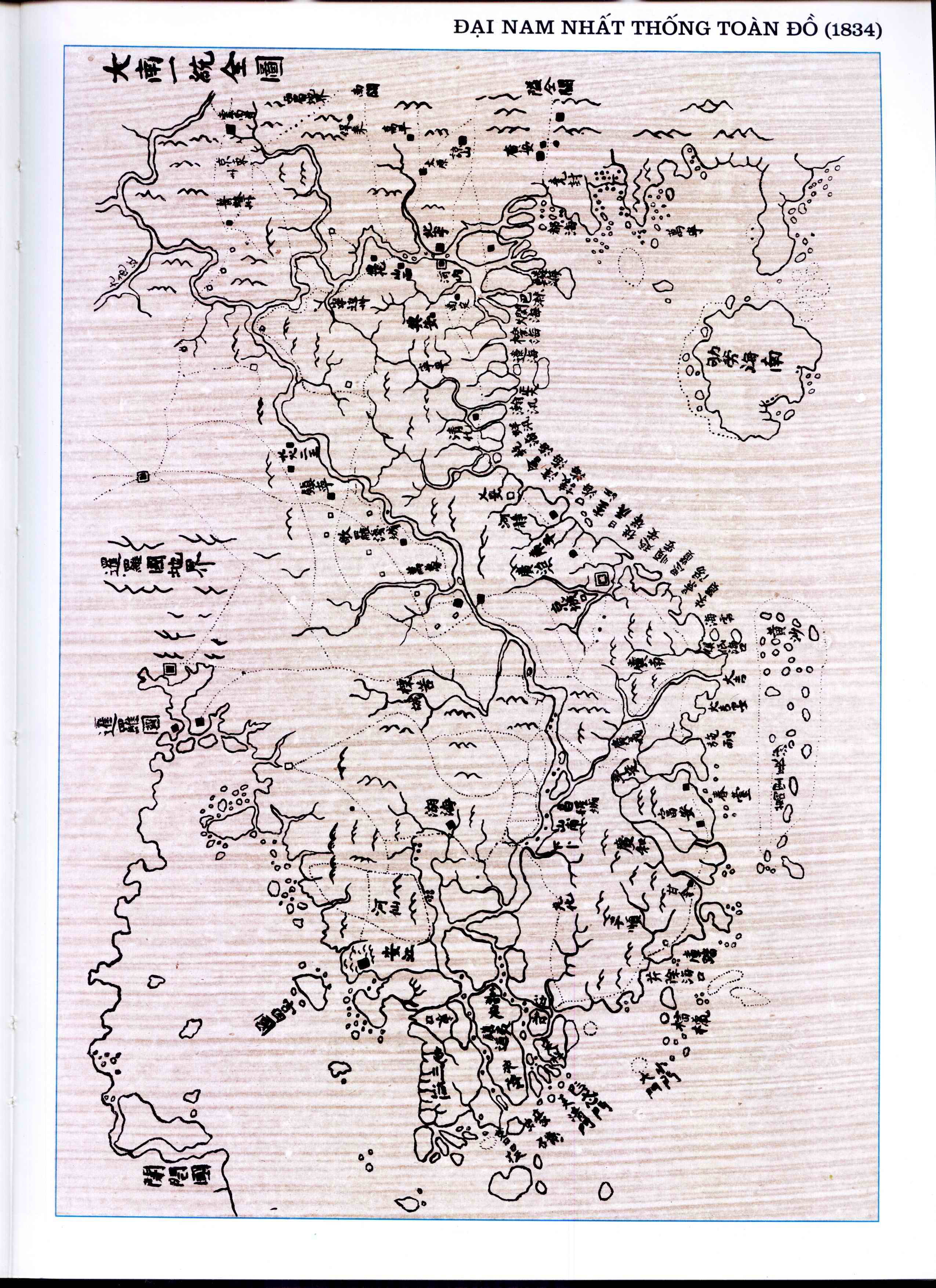 In English, the spellings Vietnam, Viet-Nam, and Viet Nam have all been used. The 1954 edition of ''Webster's New Collegiate Dictionary'' gave both the unspaced and hyphenated forms; in response to a letter from a reader, the editors indicated that the spaced form Viet Nam was also acceptable, though they stated that because Anglophones did not know the meaning of the two words making up the name Vietnam, "it is not surprising" that there was a tendency to drop the space. In 1966, the U.S. government was known to use all three renderings, with the State Department preferring the hyphenated version. By 1981, the hyphenated form was regarded as "dated", according to Scottish writer Gilbert Adair, and he titled his book about depictions of the country in film using the unhyphenated and unspaced form "Vietnam." Both Japanese and Korean formerly referred to Vietnam by their respective Sino-Xenic pronunciations of the Chinese characters for its names, but later switched to using direct phonetic transcriptions. In Japanese, following the independence of Vietnam the names and were largely replaced by the phonetic transcription , written in katakana script; however, the old form is still seen in compound words (e.g. , "a visit to Vietnam"). Japan's Ministry of Foreign Affairs sometimes used an alternative spelling . Similarly, in the Korean language, in line with the trend towards decreasing usage of hanja, the Sino-Korean-derived name ''Wollam'' (, the Korean reading of ) has been replaced by ''Beteunam'' () in South Korea and ''Wennam'' () in North Korea.