The People's Commissariat for Internal Affairs (: ''Naródnyy komissariát vnútrennikh del''; ), abbreviated NKVD ( ), was the interior ministry of the Soviet Union. Established in 1917 as NKVD of the Russian Soviet Federative Socialist Republic, the agency was originally tasked with conducting regular police work and overseeing the country's prisons and labor camps. It was disbanded in 1930, with its functions being dispersed among other agencies, only to be reinstated as an all-union commissarnat in 1934. The functions of the OGPU (the secret police organization) were transferred to the NKVD in 1934, giving it a monopoly over law enforcement activities that lasted until the end of World War II. During this period, the NKVD included both ordinary public order activities, as well as secret police activities. The NKVD is known for its role in political repression and for carrying out the Great Purge under Joseph Stalin. It was led by Genrikh Yagoda, Nikolai Yezhov and Lavrentiy Beria. The NKVD undertook mass extrajudicial executions of untold numbers of citizens, and conceived, populated and administered the Gulag system of forced labour camps. Their agents were responsible for the repression of the wealthier peasantry, as well as the mass deportations of entire nationalities to uninhabited regions of the country. They oversaw the protection of Soviet borders and espionage (which included political assassinations), and enforced Soviet policy in communist movements and puppet governments in other countries, most notably the repression and massacres in Poland. In March 1946 all People's Commissariats were renamed to Ministries, and the NKVD became the Ministry of Internal Affairs (MVD).

After the Russian February Revolution of 1917, the Provisional Government dissolved the Tsarist police and set up the ''People's Militsiya''. The subsequent Russian October Revolution of 1917 saw a seizure of state power led by Lenin and the Bolsheviks, who established a new Bolshevik regime, the Russian Soviet Federative Socialist Republic (RSFSR). The Provisional Government's Ministry of Internal Affairs (MVD), formerly under Georgy Lvov (from March 1917) and then under Nikolai Avksentiev (from ) and Alexei Nikitin (from ), turned into NKVD (People's Commissariat of Internal Affairs) under a People's Commissar. However, the NKVD apparatus was overwhelmed by duties inherited from MVD, such as the supervision of the local governments and firefighting, and the ''Workers' and Peasants' Militsiya'' staffed by proletarians was largely inexperienced and unqualified. Realizing that it was left with no capable security force, the Council of People's Commissars of the RSFSR established () a secret political police, the ''Cheka'', led by Felix Dzerzhinsky. It gained the right to undertake quick non-judicial trials and executions, if that was deemed necessary in order to "protect the Russian Socialist-Communist revolution". The ''Cheka'' was reorganized in 1922 as the State Political Directorate, or GPU, of the NKVD of the RSFSR. In 1922 the USSR formed, with the RSFSR as its largest member. The GPU became the OGPU (Joint State Political Directorate), under the Council of People's Commissars of the USSR. The NKVD of the RSFSR retained control of the ''militsiya'', and various other responsibilities. In 1934 the NKVD of the RSFSR was transformed into an all-union security force, the NKVD (which the Communist Party of the Soviet Union leaders soon came to call "the leading detachment of our party"), and the OGPU was incorporated into the NKVD as the Main Directorate for State Security (GUGB); the separate NKVD of the RSFSR was not resurrected until 1946 (as the MVD of the RSFSR). As a result, the NKVD also took over control of all detention facilities (including the forced labor camps, known as the GULag) as well as the regular police. At various times, the NKVD had the following Chief Directorates, abbreviated as "ГУ"– , . :ГУГБ – государственной безопасности, of State Security (GUGB, ) :ГУРКМ– рабоче-крестьянской милиции, of Workers and Peasants ''Militsiya'' (GURKM, ) :ГУПВО– пограничной и внутренней охраны, of Border and Internal Guards (GUPVO, ) :ГУПО– пожарной охраны, of Firefighting Services (GUPO, ) :ГУШосДор– шоссейных дорог, of Highways(GUŠD, ) :ГУЖД– железных дорог, of Railways (GUŽD, ) :ГУЛаг– Главное управление исправительно-трудовых лагерей и колоний, (GULag, ) :ГЭУ – экономическое, of Economics (GEU, ) :ГТУ – транспортное, of Transport (GTU, ) :ГУВПИ – военнопленных и интернированных, of POWs and interned persons (GUVPI, )

Until the reorganization begun by Nikolai Yezhov with a purge of the regional political police in the autumn of 1936 and formalized by a May 1939 directive of the All-Union NKVD by which all appointments to the local political police were controlled from the center, there was frequent tension between centralized control of local units and the collusion of those units with local and regional party elements, frequently resulting in the thwarting of Moscow's plans. Following its establishment in 1934, the NKVD underwent many organizational changes; between 1938 and 1939 alone, the NKVD's structure and leadership changed three times. During Yezhov's time in office, the Great Purge reached its height from the years 1937 and 1938 alone, at least 1.3 million were arrested and 681,692 were executed for 'crimes against the state'. The Gulag population swelled by 685,201 under Yezhov, nearly tripling in size in just two years, with at least 140,000 of these prisoners (and likely many more) dying of malnutrition, exhaustion and the elements in the camps (or during transport to them). On 3 February 1941, the 4th Department (Special Section, OO) of GUGB NKVD security service responsible for the Soviet Armed Forces military counter-intelligence, consisting of 12 Sections and one Investigation Unit, was separated from GUGB NKVD USSR. The official liquidation of OO GUGB within NKVD was announced on 12 February by a joint order No. 00151/003 of NKVD and NKGB USSR. The rest of GUGB was abolished and staff was moved to newly created People's Commissariat for State Security (NKGB). Departments of former GUGB were renamed Directorates. For example, foreign intelligence unit known as Foreign Department (INO) became Foreign Directorate (INU); GUGB political police unit represented by Secret Political Department (SPO) became Secret Political Directorate (SPU), and so on. The former GUGB 4th Department (OO) was split into three sections. One section, which handled military counter-intelligence in NKVD troops (former 11th Section of GUGB 4th Department OO) become 3rd NKVD Department or OKR (Otdel KontrRazvedki), the chief of OKR NKVD was Aleksander Belyanov. After the German invasion of the Soviet Union (June 1941), the NKGB USSR was abolished and on July 20, 1941, the units that formed NKGB beacme part of the NKVD. The military CI was also upgraded from a department to a directorate and put in NKVD organization as the (Directorate of Special Departments or UOO NKVD USSR). The NKVMF, however, did not return to the NKVD until January 11th, 1942. It returned to NKVD control on January 11, 1942, as UOO 9th Department controlled by P. Gladkov. In April 1943, Directorates of Special Departments was transformed in to SMERSH and transferred to the People's Defense and Commissariates. At the same time, the NKVD was reduced in size and duties again by converting the GUGB to an independent unit names the KGB In 1946, all Soviet Commissariats were renamed "ministries". Accordingly, the Peoples Commissariat of Internal Affairs (NKVD) of the USSR became the Ministry of Internal Affairs (MVD), while the NKGB was renamed as the Ministry of State Security (MGB). In 1953, after the arrest of Lavrenty Beria, the MGB merged back into the MVD. The police and security services finally split in 1954 to become: * The USSR Ministry of Internal Affairs (MVD), responsible for the criminal militia and correctional facilities. * The USSR Committee for State Security (KGB), responsible for the political police, intelligence, counter-intelligence, personal protection (of the leadership) and confidential communications.

The main function of the NKVD was to protect the state security of the Soviet Union. This role was accomplished through massive political repression, including authorised murders of many thousands of politicians and citizens, as well as kidnappings, assassinations and mass deportations. 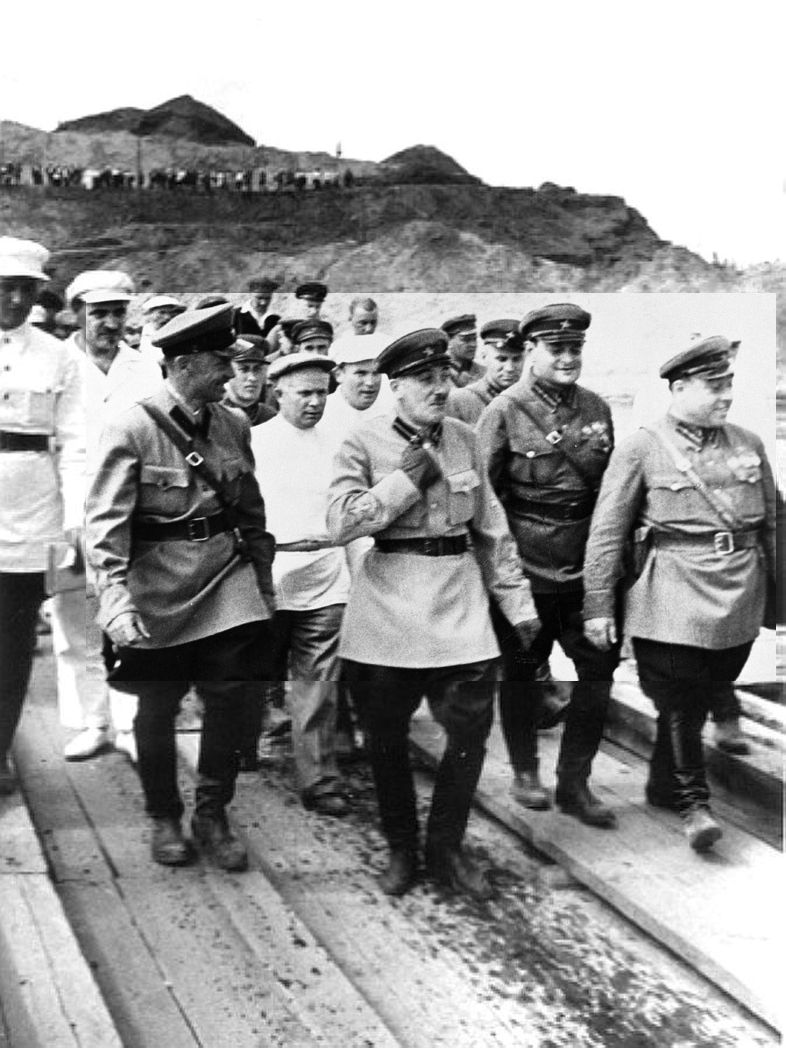 In implementing Soviet internal policy towards perceived enemies of the Soviet state ("enemies of the people"), untold multitudes of people were sent to GULAG camps and hundreds of thousands were executed by the NKVD. Formally, most of these people were convicted by NKVD troikas ("triplets")– special courts martial. Evidential standards were very low: a tip-off by an anonymous informer was considered sufficient grounds for arrest. Use of "physical means of persuasion" (torture) was sanctioned by a special decree of the state, which opened the door to numerous abuses, documented in recollections of victims and members of the NKVD itself. Hundreds of mass graves resulting from such operations were later discovered throughout the country. Documented evidence exists that the NKVD committed mass extrajudicial executions, guided by secret "plans". Those plans established the number and proportion of victims (officially "public enemies") in a given region (e.g. the quotas for clergy, former nobles etc., regardless of identity). The families of the repressed, including children, were also automatically repressed according to NKVD Order no. 00486. The purges were organized in a number of waves according to the decisions of the Politburo of the Communist Party. Some examples are the campaigns among engineers (Shakhty Trial), party and military elite plots (Great Purge with Order 00447), and medical staff ("Doctors' Plot"). Gas vans were used in the Soviet Union during the Great Purge in the cities of Moscow, Ivanovo and Omsk