The National Junior College Athletic Association (NJCAA), founded in 1938, is the governing association of community college, state college and junior college athletics throughout the United States. Currently the NJCAA holds 24 separate regions across 24 states and is divided into 3 divisions.

The idea for the NJCAA was conceived in 1937 at Fresno, California. A handful of junior college representatives met to organize an association that would promote and supervise a national program of junior college sports and activities consistent with the educational objectives of junior colleges. A constitution was presented and adopted at the charter meeting in Fresno on May 14, 1938. In 1949, the NJCAA was reorganized by dividing the nation into sixteen regions. The officers of the association were the president, vice president, secretary, treasurer, public relations director, and the sixteen regional vice presidents. Although the NJCAA was founded in California, it no longer operates there, having been supplanted by the unaffiliated California Community College Athletic Association. The NJCAA only allowed male competitors until 1975, when it established a women's division following the enactment of Title IX. Based out of Hutchinson, Kansas since 1968, the national office relocated to Colorado Springs, Colorado in 1985. Headquarters moved to Charlotte, North Carolina in 2018.

Each institution belonging to the NJCAA chooses to compete on the Division I, II or III level. Division I colleges may offer full athletic scholarships, totaling a maximum of tuition, fees, room and board, course-related books, up to $250 in course-required supplies, and transportation costs one time per academic year to and from the college by direct route. Division II colleges are limited to awarding tuition, fees, course related books, and up to $250 in course required supplies. Division III institutions may provide no athletically related financial assistance. However, NJCAA colleges that do not offer athletic aid may choose to participate at the Division I or II level if they so desire. 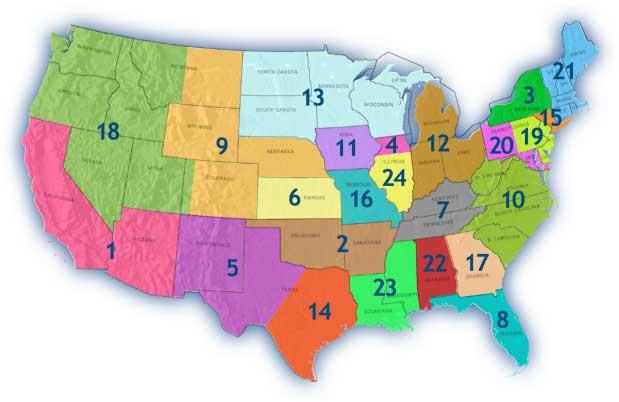 Due to the relatively small number of schools fielding teams, some football-only conferences exist. They may be home to teams from multiple regions. * The Kansas Jayhawk Community College Conference includes only schools in Kansas (Region 6). All are members of the conference in other sports. * The Midwest Football Conference which features schools from Iowa (Region 11), once included programs in northern Illinois (Region 4), Michigan (part of Region 12), and North Dakota (part of Region 13) before several of its schools dropped football prior to the 2015 season. The three Iowa schools (Ellsworth, Iowa Central and Iowa Western) play each other and also have a scheduling alliance with the KJCCC. The College of DuPage (Region 4), the only Illinois school that still has football, plays as an independent. Harper, Joliet and Grand Rapids all disbanded their football programs. North Dakota State School of Science joined the MCAC (see below). * The Minnesota College Athletic Conference, includes schools in Minnesota and North Dakota (part of Region 13). All of the Minnesota schools participate in the conference in other sports. North Dakota State School of Science and Dakota College only participate in football. * The Mississippi Association of Community & Junior Colleges only includes schools in that state, which is a part of Region 23. None of the Louisiana members of Region 23 field a football team. * The Northeast JC Football Conference includes schools from regions 15 (Lower New York, New York City and Long Island), and 19 (Lackawanna, Pa.). Lackawanna is the only football-playing school in Region 19. * The Southwest Junior College Football Conference includes teams from both regions in Texas (5 and 14), Northeastern Oklahoma A&M (Region 2) and New Mexico Military (Region 5). * Western States Football League, now defunct, once included teams from Arizona (Region 1) and Utah and Idaho (Region 18). Snow College, Utah, is now the only college sponsoring football in Region 1 and Region 18. There are also independent schools in regions 2 (Arkansas Baptist), 3 (upstate New York), 8 (ASA-Miami), 10 (Louisburg, N.C.), 12 (Hocking College), and 17 (Georgia Military). Onondaga Community College's football program does not compete in the NJCAA but instead competes at the club football level. Regions 7, 9, 16, 20, 21, 22 and 24 do not have any football programs.