Mount Jefferson is a stratovolcano in the Cascade Volcanic Arc, part of the Cascade Range in the U.S. state of Oregon. The second highest mountain in Oregon, it is situated within Linn County, Jefferson County, and Marion County and forms part of the Mount Jefferson Wilderness. Due to the ruggedness of its surroundings, the mountain is one of the hardest volcanoes to reach in the Cascades. It is also a popular tourist destination despite its remoteness, with recreational activities including hiking, backpacking, mountaineering, and photography. Vegetation at Mount Jefferson is dominated by Douglas fir, silver fir, mountain hemlock, ponderosa pine, lodgepole pine, and several cedar species. Carnivores, insectivores, bats, rodents, deer, birds, and various other species inhabit the area. Also known as Seekseekqua by Native American populations, the volcano was named after United States President Thomas Jefferson, and was first ascended by E. C. Cross and R. L. Farmer in 1888. It sits atop an area of crustal melting, and was produced by the subduction of the oceanic Juan de Fuca tectonic plate under the continental North American tectonic plate, forming about 730,000 years ago. Consisting of basaltic andesite, andesite, and dacite, the mountain has been extensively altered by glacial erosion. The surrounding area contains a number of other volcanic features like cinder cones, shield volcanoes, and tuyas (flat-topped, steep-sided volcanoes formed when lava erupts through a thick glacier or ice sheet). It is considered a low threat by the United States Geological Survey. Despite the low chance of future eruptions, many scientists still consider mudflows a major threat at Mount Jefferson. 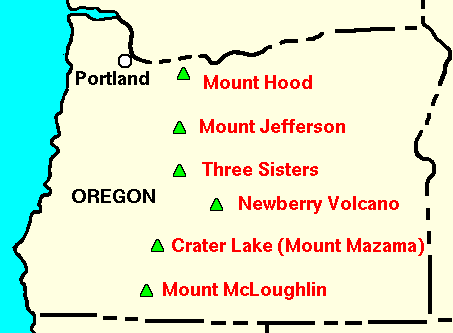 The second tallest mountain in the U.S. state of Oregon after Mount Hood, Mount Jefferson lies within Jefferson, Linn, and Marion counties, in the central part of the state. Reaching an elevation of , the volcano has a proximal relief of . It is not usually visible from the city of Portland, though it is visible on clear days from Salem and can be noticed from highways to both the east and the west of the Cascade Range. The average elevation of the terrain around Jefferson is , meaning that Jefferson's cone rises nearly above its surroundings.

When Little Ice Age glaciers retreated during the 20th century, water filled in the spaces left behind, forming moraine-dammed lakes, which are more common in the Mount Jefferson Wilderness and the nearby Three Sisters Wilderness than anywhere else in the contiguous United States. A number of these lakes breached during the 20th century and inundated Jefferson Park and the Jefferson Creek drainage under Waldo Glacier. These breach events yielded floods and small lahars (volcanically induced mudslides, landslides, and debris flows). The flood on August 21, 1934, at a lake formed near Whitewater Glacier, created a debris flow that reached the Whitewater River drainage and buried parts of Jefferson Park in of debris; another event took place in 1957, but was poorly documented. Mount Jefferson has 35 snow and ice features, including four named glaciers: Whitewater, Jefferson Park, Russell, and Waldo. These features, for the most part on the northern, eastern, and southeastern parts of Mount Jefferson, span elevations from and cover an area of . The volcano, like much of the Oregon Cascades, was likely covered by an ice cap during the Pleistocene,