The Monroe Doctrine was a United States policy that opposed European colonialism in the Americas. It argued that any intervention in the politics of the Americas by foreign powers was a potentially hostile act against the United States. It began in 1823; however, the term "Monroe Doctrine" itself was not coined until 1850. The Monroe Doctrine was issued on December 2, at a time when nearly all Latin American colonies of Spain and Portugal had achieved, or were at the point of gaining, independence from the Portuguese and Spanish Empires. It stated that further efforts by various European states to take control of any independent state in the Americas would be viewed as "the manifestation of an unfriendly disposition toward the United States." At the same time, the doctrine noted that the U.S. would recognize and not interfere with existing European colonies nor meddle in the internal affairs of European countries. President James Monroe first stated the doctrine during his seventh annual State of the Union Address to the Congress. The doctrine asserted that the New World and the Old World were to remain distinctly separate spheres of influence. The separation intended to avoid situations that could make the New World a battleground for the Old World powers so that the U.S. could exert its influence undisturbed. By the end of the 19th century, Monroe's declaration was seen as a defining moment in the foreign policy of the United States and one of its longest-standing tenets. The intent and impact of the doctrine persisted more than a century, with only small variations, and would be invoked by many U.S. statesmen and several U.S. presidents, including Ulysses S. Grant, Theodore Roosevelt, John F. Kennedy, and Ronald Reagan. After 1898, the Monroe Doctrine was reinterpreted in terms of multilateralism and non-intervention by Latin American lawyers and intellectuals. In 1933, under President Franklin D. Roosevelt, the U.S. went along with this new reinterpretation, especially in terms of the Organization of American States.


Seeds of the Monroe Doctrine 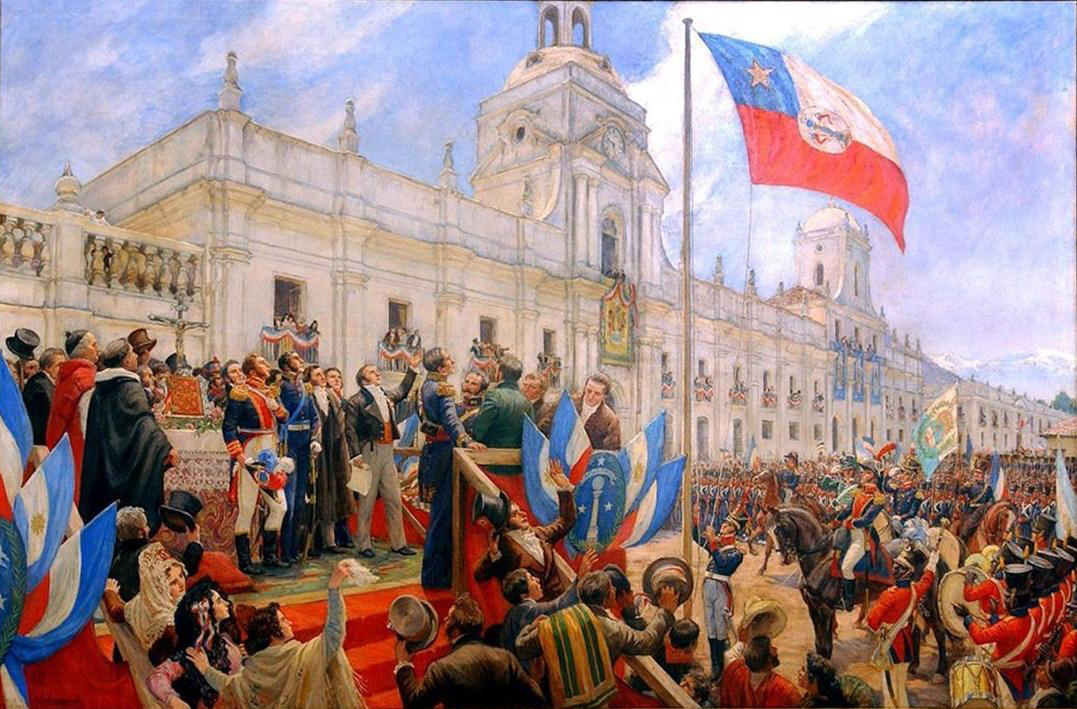 Despite America's beginnings as an isolationist country, the foundation of the Monroe Doctrine was already being laid even during George Washington's presidency. According to S.E. Morison, "as early as 1783, then, the United States adopted the policy of isolation and announced its intention to keep out of Europe. The supplementary principle of the Monroe Doctrine, that Europe must keep out of America, was still over the horizon". While not specifically the Monroe Doctrine, but this was extended to the Latin American colonies by the Monroe Doctrine. But Hamilton, writing in the ''Federalist Papers'', was already wanting to establish America as a world power and hoped that America would suddenly become strong enough to keep the European powers outside of the Americas, despite the fact that the European countries controlled much more of the Americas than the U.S. itself. Hamilton expected that the United States would become the dominant power in the New World and would, in the future, act as an intermediary between the European powers and any new countries blossoming near the U.S. In a note from James Madison (Thomas Jefferson's Secretary of State and a future president) to the U.S. ambassador to Spain, the federal government expressed the opposition of the American government to further territorial acquisition by European powers. Madison's sentiment might have been meaningless because, as was noted before, the European powers held much more territory in comparison to the territory held by the U.S. Although Thomas Jefferson was pro-French, in an attempt to keep the British–French rivalry out the U.S., the federal government under Jefferson made it clear to its ambassadors that the U.S. would not support any future colonization efforts on the North American continent. The U.S. government feared the victorious European powers that emerged from the Congress of Vienna (1814–1815) would revive monarchical government. France had already agreed to restore the Spanish monarchy in exchange for Cuba. As the revolutionary Napoleonic Wars (1803–1815) ended, Prussia, Austria, and Russia formed the Holy Alliance to defend monarchism. In particular, the Holy Alliance authorized military incursions to re-establish Bourbon rule over Spain and its colonies, which were establishing their independence. Great Britain shared the general objective of the Monroe Doctrine, and even wanted to declare a joint statement to keep other European powers from further colonizing the New World. The British feared their trade with the New World would be harmed if the other European powers further colonized it. In fact, for many years after the doctrine took effect, Britain, through the Royal Navy, was the sole nation enforcing it, the U.S. lacking sufficient naval capability. The U.S. resisted a joint statement because of the recent memory of the War of 1812; however, the immediate provocation was the Russian Ukase of 1821 asserting rights to the Pacific Northwest and forbidding non-Russian ships from approaching the coast.

The full document of the Monroe Doctrine, written chiefly by future-President and then-Secretary of State John Quincy Adams, is long and couched in diplomatic language, but its essence is expressed in two key passages. The first is the introductory statement, which asserts that the New World is no longer subject to colonization by the European countries: The second key passage, which contains a fuller statement of the Doctrine, is addressed to the "allied powers" of Europe; it clarifies that the U.S. remains neutral on existing European colonies in the Americas but is opposed to "interpositions" that would create new colonies among the newly independent Spanish American republics:

Because the U.S. lacked both a credible navy and army at the time, the doctrine was largely disregarded internationally. Prince Metternich of Austria was angered by the statement, and wrote privately that the doctrine was a "new act of revolt" by the U.S. that would grant "new strength to the apostles of sedition and reanimate the courage of every conspirator." The doctrine, however, met with tacit British approval. They enforced it tactically as part of the wider Pax Britannica, which included enforcement of the neutrality of the seas. This was in line with the developing British policy of laissez-faire free trade against mercantilism. Fast-growing British industry sought markets for its manufactured goods, and, if the newly independent Latin American states became Spanish colonies again, British access to these markets would be cut off by Spanish mercantilist policy.

The reaction in Latin America to the Monroe Doctrine was generally favorable but on some occasions suspicious. John A. Crow, author of ''The Epic of Latin America'', states, "Simón Bolívar himself, still in the midst of his last campaign against the Spaniards, Santander in Colombia, Rivadavia in Argentina, Victoria in Mexico—leaders of the emancipation movement everywhere—received Monroe's words with sincerest gratitude". Crow argues that the leaders of Latin America were realists. They knew that the president of the United States wielded very little power at the time, particularly without the backing of the British forces, and figured that the Monroe Doctrine was unenforceable if the United States stood alone against the Holy Alliance. While they appreciated and praised their support in the north, they knew that the future of their independence was in the hands of the British and their powerful navy. In 1826, Bolivar called upon his Congress of Panama to host the first "Pan-American" meeting. In the eyes of Bolivar and his men, the Monroe Doctrine was to become nothing more than a tool of national policy. According to Crow, "It was not meant to be, and was never intended to be a charter for concerted hemispheric action". At the same time, some people questioned the intentions behind the Monroe Doctrine. Diego Portales, a Chilean businessman and minister, wrote to a friend: "But we have to be very careful: for the Americans of the north rom the United States the only Americans are themselves".

In Spanish America, Royalist guerrillas continued the war in several countries, and Spain attempted to retake Mexico in 1829. Only Cuba and Puerto Rico remained under Spanish rule, until the Spanish–American War in 1898. In early 1833, the British reasserted their sovereignty over the Falkland islands. No action was taken by the US, and George C. Herring writes that the inaction "confirmed Latin American and especially Argentine suspicions of the United States." In 1838–50 Argentina was blockaded by the French and, later, the British. No action was taken by the U.S. In 1842, U.S. President John Tyler applied the Monroe Doctrine to Hawaii and warned Britain not to interfere there. This began the process of annexing Hawaii to the U.S. On December 2, 1845, U.S. President James Polk announced that the principle of the Monroe Doctrine should be strictly enforced, reinterpreting it to argue that no European nation should interfere with the American western expansion ("Manifest Destiny").

In 1861, Dominican military commander and royalist politician Pedro Santana signed a pact with the Spanish Crown and reverted the Dominican nation to colonial status. Spain was wary at first, but with the U.S. occupied with its own civil war, it felt it had an opportunity to reassert control in Latin America. On March 18, 1861, the Spanish annexation of the Dominican Republic was announced. The end of the American Civil War in 1865 and the re-assertion of the Monroe Doctrine by the United States, which was no longer involved in internal conflict, prompted the evacuation of Spanish forces back to Cuba that same year. In 1862, French forces under Napoleon III invaded and conquered Mexico, giving control to the puppet monarch Emperor Maximilian. Washington denounced this as a violation of the doctrine but was unable to intervene because of the American Civil War. This marked the first time the Monroe Doctrine was widely referred to as a "doctrine." In 1865 the U.S. stationed a large combat army on the border to emphasize its demand that France leave. France did pull out, and Mexican nationalists executed Maximilian. In 1862, the British colonial settlements in Belize were transformed into a crown colony of the British Empire and renamed British Honduras. The U.S. government did not express disapproval for this action, either during or after the Civil War. 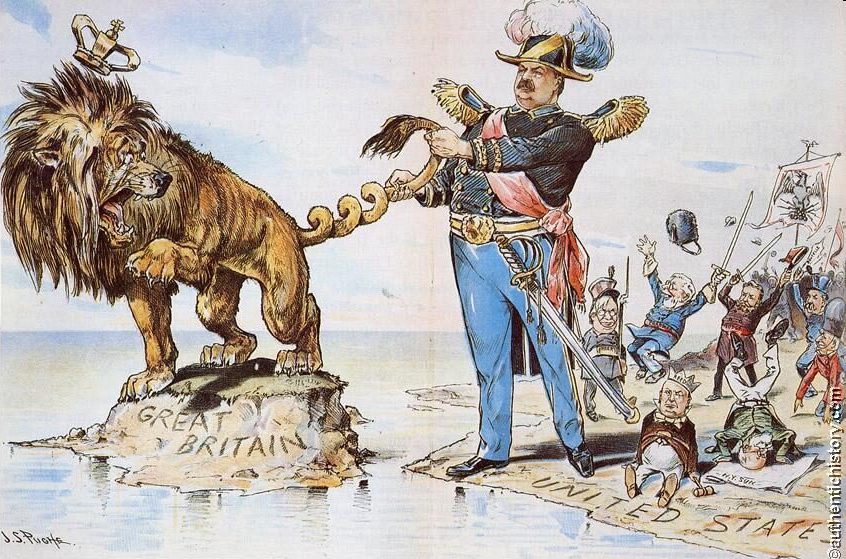 In the 1870s, President Ulysses S. Grant and his Secretary of State Hamilton Fish endeavored to supplant European influence in Latin America with that of the U.S. In 1870, the Monroe Doctrine was expanded under the proclamation "hereafter no territory on this continent eferring to Central and South Americashall be regarded as subject to transfer to a European power." Grant invoked the Monroe Doctrine in his failed attempt to annex the Dominican Republic in 1870. The Venezuela Crisis of 1895 became "one of the most momentous episodes in the history of Anglo-American relations in general and of Anglo-American rivalries in Latin America in particular." Venezuela sought to involve the U.S. in a territorial dispute with Britain over Guayana Esequiba, and hired former US ambassador William L. Scruggs to argue that British behaviour over the issue violated the Monroe Doctrine. President Grover Cleveland through his Secretary of State, Richard Olney, cited the Doctrine in 1895, threatening strong action against Great Britain if the British failed to arbitrate their dispute with Venezuela. In a July 20, 1895 note to Britain, Olney stated, "The United States is practically sovereign on this continent, and its fiat is law upon the subjects to which it confines its interposition." British Prime Minister Lord Salisbury took strong exception to the American language. The U.S. objected to a British proposal for a joint meeting to clarify the scope of the Monroe Doctrine. Historian George Herring wrote that by failing to pursue the issue further the British "tacitly conceded the U.S. definition of the Monroe Doctrine and its hegemony in the hemisphere." Otto von Bismarck, did not agree and in October 1897 called the Doctrine an "uncommon insolence". Sitting in Paris, the Tribunal of Arbitration finalized its decision on October 3, 1899.