Michael Richard Pence (born June 7, 1959) is an American politician, broadcaster, and lawyer who served as the 48th vice president of the United States from 2017 to 2021. A member of the Republican Party, he was the 50th governor of Indiana from 2013 to 2017. Pence was also a member of the U.S. House of Representatives from 2001 to 2013. Pence was born and raised in Columbus, Indiana, and is the younger brother of U.S. representative Greg Pence. He graduated from Hanover College and earned a law degree from the Indiana University Robert H. McKinney School of Law before entering private practice. After losing two bids for a congressional seat in 1988 and 1990, he became a conservative radio and television talk show host from 1994 to 1999. Pence was elected to the U.S. House of Representatives in 2000 and represented Indiana's 2nd and 6th congressional districts from 2001 to 2013. He chaired the Republican Study Committee from 2005 to 2007 and served as the chairman of the House Republican Conference from 2009 to 2011, the third-highest position in the House Republican leadership. Pence described himself as a "principled conservative" and supporter of the Tea Party movement, saying he was "a Christian, a conservative, and a Republican, in that order." Pence successfully sought the Republican nomination for the 2012 Indiana gubernatorial election when term-limited Mitch Daniels retired. He defeated former Indiana House speaker John R. Gregg in the closest gubernatorial election in 50 years. Upon becoming governor in January 2013, Pence initiated the largest tax cut in Indiana's history and pushed for more funding for private education initiatives. Pence signed bills intended to restrict abortions, including one that prohibited abortions if the reason for the procedure was the fetus's race, gender, or disability. After Pence signed the Religious Freedom Restoration Act, he encountered fierce resistance from moderate members of his party, the business community, and LGBT advocates. The backlash against the RFRA led Pence to amend the bill to prohibit discrimination based on sexual orientation, gender identity, and other criteria. Pence withdrew his gubernatorial reelection campaign in July 2016 to become the running mate of Republican presidential nominee Donald Trump, who went on to win the 2016 presidential election. He was inaugurated as vice president of the United States on January 20, 2017. As vice president, Pence chaired the National Space Council since it was reestablished in June 2017. In February 2020, Pence was appointed chairman of the White House Coronavirus Task Force, which was established in response to the COVID-19 pandemic in the United States. Pence and Trump lost their bid for re-election in the 2020 presidential election to Joe Biden and Kamala Harris, although the Trump campaign refused to concede, made allegations of election fraud, and filed lawsuits in multiple states, all of which were eventually rejected by the courts. Despite Trump's urging to overturn the results, Pence certified the Biden-Harris ticket as the winner of the election. Pence was vilified by Trump and threatened with violence by some of Trump's supporters for not trying to overturn the election results.

Mike Pence was born Michael Richard Pence on June 7, 1959 in Columbus, Indiana, one of six children of Ann Jane "Nancy" (''née'' Cawley) and Edward Joseph Pence Jr., who ran a group of gas stations. His father served in the U.S. Army during the Korean War and received the Bronze Star in 1953, which Pence displays in his office along with its commendation letter and a reception photograph. His father was of German and Irish descent and his mother is of Irish ancestry. His paternal grandfather, Edward Joseph Pence, Sr., worked in the Chicago stockyards. Pence was named after his maternal grandfather, Richard Michael Cawley, who emigrated from Doocastle, County Mayo, Ireland, to the United States through Ellis Island, following an aunt and his brother James, and became a bus driver in Chicago, Illinois. His maternal grandmother's parents were from Doonbeg, County Clare, Ireland. Pence graduated from Columbus North High School in 1977. He earned a Bachelor of Arts in history from Hanover College in 1981, and a Juris Doctor from the Robert H. McKinney School of Law at Indiana University–Purdue University Indianapolis in Indianapolis in 1986. While at Hanover, Pence joined the Phi Gamma Delta fraternity, where he became the chapter president. After graduating from Hanover, Pence was an admissions counselor at the college from 1981 to 1983. In his childhood and early adulthood, Pence was a Roman Catholic and a Democrat, as was the rest of his family. He volunteered for the Bartholomew County Democratic Party in 1976 and voted for Jimmy Carter in the 1980 presidential election, and has said he was originally inspired to get involved in politics by people such as John F. Kennedy and Martin Luther King Jr. While in college, Pence left the Catholic Church and became an evangelical, born-again Christian, to the great disappointment of his mother. His political views also started shifting to the right during this time in his life, something which Pence attributes to the "common-sense conservatism of Ronald Reagan" with which he began to identify.

After graduating from law school in 1986, Pence was an attorney in private practice. In 1988, Pence ran for Congress against Democratic incumbent Philip Sharp, but lost. He ran against Sharp again in 1990, quitting his job in order to work full-time in the campaign, but once again was unsuccessful. During the race, Pence used "political donations to pay the mortgage on his house, his personal credit card bill, groceries, golf tournament fees and car payments for his wife". While the spending was not illegal at the time, it reportedly undermined his campaign. 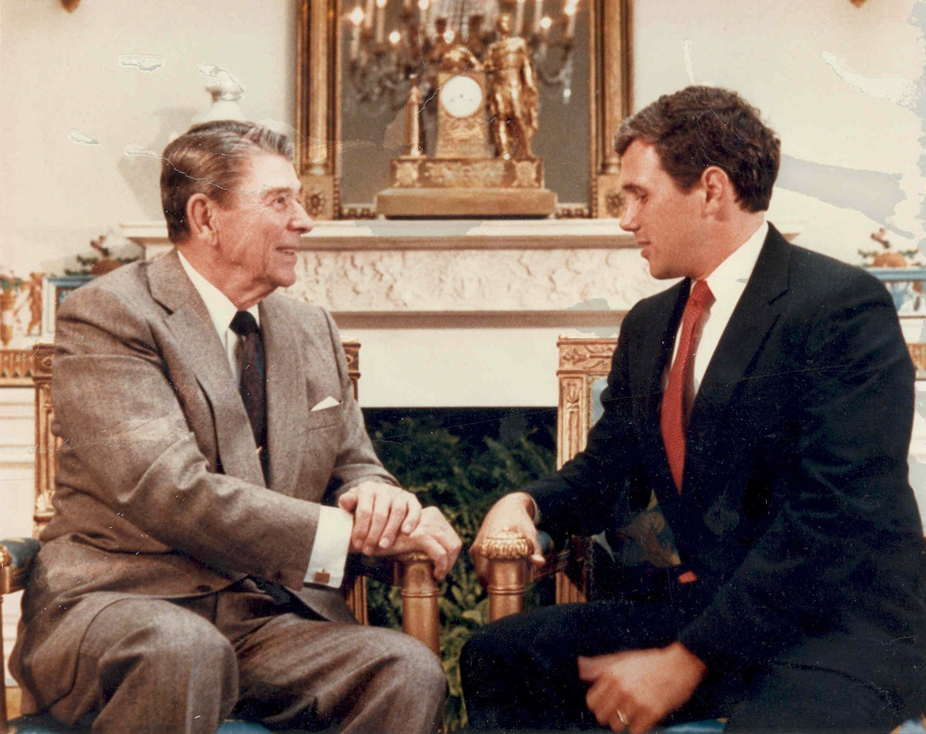 During the 1990 campaign, Pence ran a television advertisement in which an actor, dressed in a robe and headdress and speaking in a thick Middle Eastern accent, thanked his opponent, Sharp, for doing nothing to wean the United States off imported oil as chairman of a House subcommittee on energy and power. In response to criticism, Pence's campaign responded that the advertisement was not about Arabs; rather, it concerned Sharp's lack of leadership.