The Metropolitan Police Service (MPS), formerly and still commonly known as the Metropolitan Police and informally as the Met Police, the Met, Scotland Yard, or the Yard, is the territorial police force responsible for law enforcement in the Metropolitan Police District, which currently consists of the 32 London boroughs. The MPD does not include the "square mile" of the City of London, which is policed by the much smaller City of London Police. The Met also has significant national responsibilities, such as co-ordinating and leading on UK-wide national counter-terrorism matters and protecting the Royal Family, certain members of Her Majesty's Government and others as deemed appropriate. As the police force for the capital, the Met has significant unique responsibilities and challenges within its police area, such as protecting 164 foreign embassies and High Commissions, policing London City and Heathrow Airports, policing and protecting the Palace of Westminster, and dealing with significantly more protests and events than any other force in the country, with 3,500 such events in 2016. The force, by officer numbers, is the largest in the United Kingdom by a significant margin, and one of the biggest in the world. Leaving its national responsibilities aside, the Met has the eighth-smallest police area (primary geographic area of responsibility) of the territorial police forces in the United Kingdom. The force is led by the Commissioner, whose formal title is the Commissioner of Police of the Metropolis. The Commissioner is answerable, responsible and accountable to The Queen, the Home Office and the Mayor of London, through the Mayor's Office for Policing and Crime. The post of Commissioner was first held jointly by Sir Charles Rowan and Sir Richard Mayne. Dame Cressida Dick was appointed Commissioner in April 2017. A number of informal names and abbreviations are applied to the Metropolitan Police Service, the most common being ''the Met''. In colloquial London (or Cockney) slang, it is sometimes referred to as the ''Old Bill''. The Met is also referred to as Scotland Yard after the location of its original headquarters in a road called Great Scotland Yard in Whitehall. The Met's current headquarters is New Scotland Yard, situated on the Victoria Embankment.

Since January 2012, the Mayor of London is responsible for the governance of the Metropolitan Police through the Mayor's Office for Policing and Crime (MOPAC). The mayor is able to appoint someone to act on his behalf. , the office-holder is Deputy Mayor for Policing and Crime, Sophie Linden. The work of MOPAC is scrutinised by the Police and Crime Committee (also known as a police and crime panel) of the London Assembly. These structures were created by the Police Reform and Social Responsibility Act 2011 and replaced the Metropolitan Police Authority-appointed board created in 2000 by Greater London Authority Act 1999.

Police area and other forces

The area policed by the Metropolitan Police Service is known as the Metropolitan Police District (MPD). The Met was divided into 32 Borough Operational Command Units that directly aligned with the 32 London boroughs covered. This situation has changed since 2017, as the Met has attempted to save money due to cuts in funding. There is currently a period of transition which will result in the MPD being divided into 12 Basic Command Units made up of two, three or four boroughs. There is criticism of these changes. The City of London (which is not a London borough) is a separate police area and is the responsibility of the separate City of London Police. The Ministry of Defence Police is responsible for policing of Ministry of Defence property throughout the United Kingdom, including its headquarters in Whitehall and other MoD establishments across the MPD. The British Transport Police are responsible for policing of the rail network in the United Kingdom, including London. Within London, they are also responsible for the policing of the London Underground, Tramlink, The Emirates Air Line (cable car) and the Docklands Light Railway. The English part of the Royal Parks Constabulary, which patrolled a number of Greater London's major parks, was merged with the Metropolitan Police in 2004, and those parks are now policed by the Royal Parks Operational Command Unit. There is also a small park police force, the Kew Constabulary, responsible for the Royal Botanic Gardens, whose officers have full police powers within the park. A few local authorities maintain their own borough park constabularies, including Wandsworth Parks and Events Police, Kensington and Chelsea Parks Police, Hammersmith and Fulham Parks Constabulary, Havering Parks Constabulary and the Hampstead Heath Constabulary. All of which enjoy powers of arrest without warrant as constables, however the officers of the latter have full police powers, much like officers of the Metropolitan Police on the Heath. The other parks police primarily focus on by-law enforcement. Metropolitan Police officers have legal jurisdiction throughout all of England and Wales, including areas that have their own special police forces, such as the Ministry of Defence, as do all police officers of territorial police forces. Officers also have limited powers in Scotland and Northern Ireland. Within the MPD, the Met will take over the investigation of any serious crime from the Ministry of Defence Police and to a lesser degree BTP, if it is deemed appropriate. Terrorist incidents and complex murder enquiries will almost always be investigated by the Met, with the assistance of any relevant specialist force, even if they are committed on Ministry of Defence or railway property. A minor incursion into the normal jurisdiction of territorial police officers in England and Wales is that Met officers involved in the protection duties of the Royal Family and other VIPs have full police powers in Scotland and Northern Ireland in connection with those duties.

The Metropolitan Police Service uses the standard British police ranks, indicated by shoulder boards, up to Chief Superintendent, but uniquely has five ranks above that level instead of the standard three; namely Commander, Deputy Assistant Commissioner, Assistant Commissioner, Deputy Commissioner and Commissioner. All senior officers of the rank of Commander and above are chief police officers of NPCC (previously ACPO) rank. The Met approved the use of name badges in October 2003, with new recruits wearing the Velcro badges from September 2004. The badge consists of the wearer's rank, followed by their surname. Following controversy over assaults by uniformed officers with concealed shoulder identification numbers during the G20 summit, Commissioner Sir Paul Stephenson said, "the public has a right to be able to identify any uniformed officer whilst performing their duty" by their shoulder identification numbers.

The Met uniformed officer rank structure, with epaulette design, is as follows: The Met also has several active Volunteer Police Cadet units, which maintain their own internal rank structure. The Metropolitan Special Constabulary is a contingent of part-time volunteer police officers and is attached to most Borough Operational Command Units. The Metropolitan Special Constabulary Ranks are as follows: The prefix "Woman" in front of female officers' ranks has been obsolete since 1999. Members of the Criminal Investigation Department (CID) up to and including the rank of Chief Superintendent prefix their ranks with "Detective". Detective ranks are equivalent in rank to their uniform counterparts. Other departments, such as Special Branch and Child Protection, award non-detectives "Branch Detective" status, allowing them to use the "Detective" prefix. None of these detective ranks confer on the holder any extra pay or supervisory authority compared to their uniformed colleagues.

The following is the current released workforce data for the ranks. The Chief officers rank covers all senior ranks as well as Special Constables covering all special constable ranks. 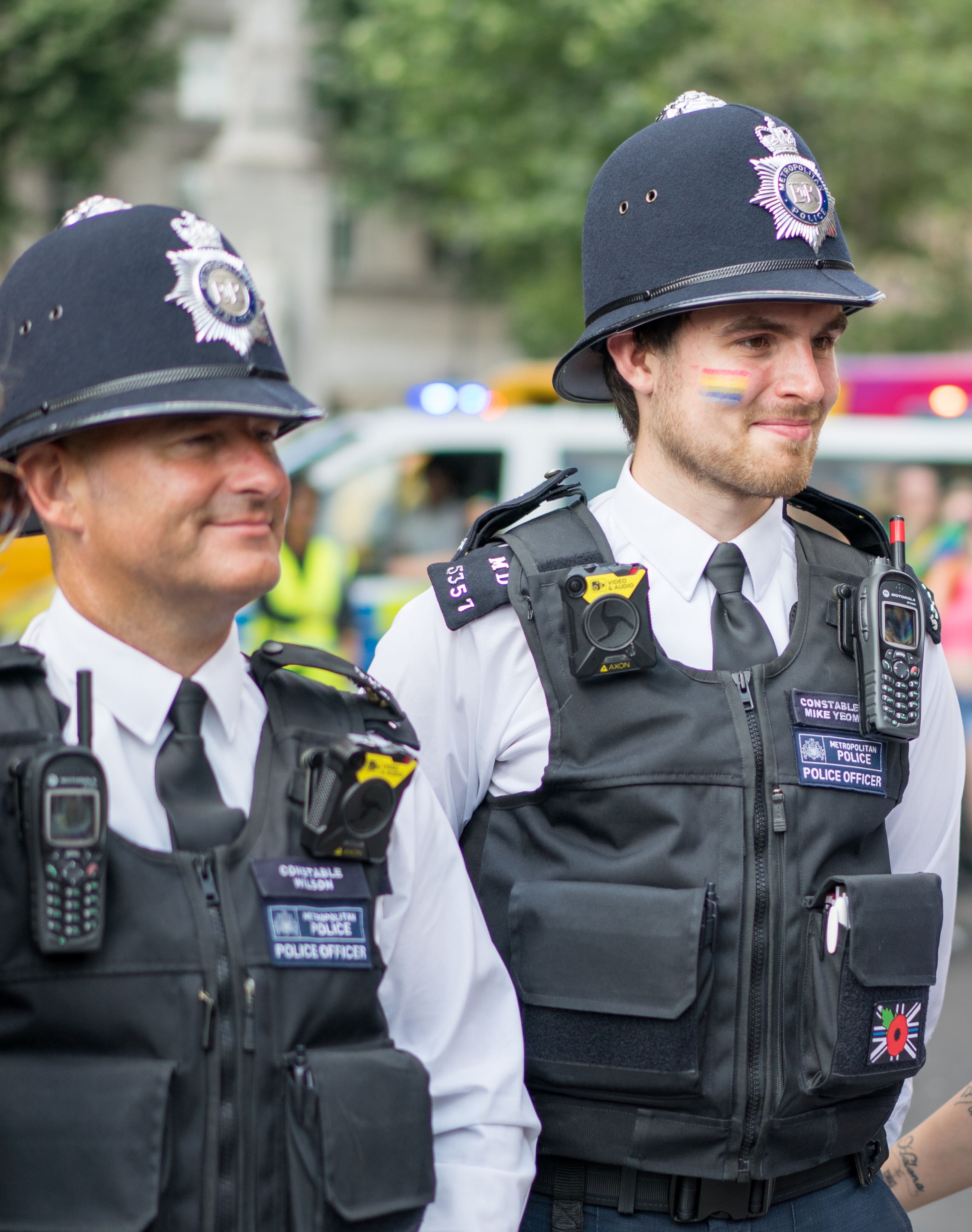 The Metropolitan Police Service consists of police officers and special constables (the latter of which are volunteers, generally part time, with full police powers), police community support officers and police staff (civilians). The Met was the first force to introduce PCSOs. Unlike police staff and PCSOs, police officers are not employees: they are servants of the crown. Funding for the Metropolitan police has been cut due to austerity. Changes in the way the government pays for police pensions will lead to further cuts.