Matthew David McConaughey was born on November 4, 1969, in Uvalde, Texas. His mother, Mary Kathleen "Kay"/"KMac" (née McCabe), is a former kindergarten teacher and published author who taught him. She was originally from Trenton, New Jersey. His father, James Donald "Jim" McConaughey, was born in Mississippi in 1929 and raised in Louisiana, where he ran an oil pipe supply business; he played for the Kentucky Wildcats and the Houston Cougars college football teams. In 1953, Jim was drafted in the 27th round by the NFL's Green Bay Packers. He was released before the season began and never played an official league game in the NFL. McConaughey's parents married each other three times, having divorced each other twice. He has two older brothers, Michael and Patrick (who was adopted). Michael, nicknamed "Rooster", is a self-made millionaire who stars in the CNBC docu-series ''West Texas Investors Club'', and as of 2018 stars in the A&E reality show ''Rooster & Butch'' with Wayne (Butch) Gilliam. McConaughey's ancestry includes English, German, Irish, Scottish, and Swedish, with some of his Irish roots being from the Cavan/Monaghan area. He is a relative of Confederate brigadier general Dandridge McRae. He had a Methodist upbringing. McConaughey moved to Longview, Texas, in 1980, where he attended Longview High School. He lived in Australia for a year, in Warnervale, New South Wales, as a Rotary Youth Exchange student in 1988. He attended the University of Texas at Austin (UT-Austin), where he joined Delta Tau Delta fraternity. He began in the fall of 1989 and graduated in the spring of 1993 with a Bachelor of Science in Radio-Television-Film. His original plan had changed as he wanted to attend Southern Methodist University until one of his brothers told him that private school tuition would have been a burden on the family's finances. He also had planned to attend law school after graduation from college, but he realized he was not interested in becoming a lawyer. 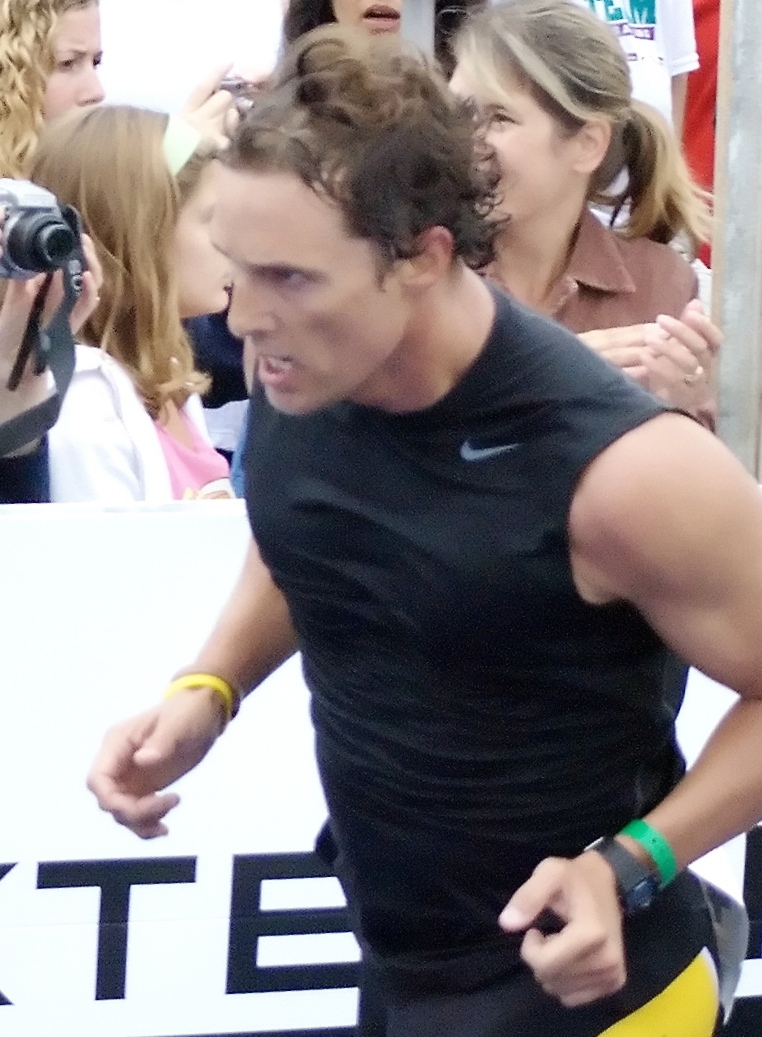 By the early 2000s, he was frequently cast in romantic comedies, including ''The Wedding Planner'' and ''How to Lose a Guy in 10 Days'', both of which were successful at the box office. During this period, he appeared as a firefighter in the low-budget film ''Tiptoes'', with Kate Beckinsale, in ''Two for the Money'' as a protégé to Al Pacino's gambling mogul, and in ''Frailty'' with Bill Paxton, who also directed. McConaughey starred in the 2005 feature film ''Sahara'', along with Steve Zahn and Penélope Cruz. Prior to the release of the film, he promoted it by sailing down the Amazon River and trekking to Mali. That same year, McConaughey was named ''People'' magazine's "Sexiest Man Alive" for 2005. In 2006, he co-starred with Sarah Jessica Parker in the romantic comedy ''Failure to Launch'' and as Marshall head football coach Jack Lengyel in ''We Are Marshall''. McConaughey also provided voice work in an ad campaign for the Peace Corps in late 2006. He replaced Owen Wilson in Ben Stiller's ''Tropic Thunder'' after Wilson's suicide attempt. On January 21, 2008, McConaughey became the new spokesman for the national radio campaign, "Beef: It's What's for Dinner", replacing Sam Elliott.

McConaughey recognized that his "lifestyle, living on the beach, running with my shirt off, doing romantic comedies" had caused him to be typecast for certain roles, and he sought dramatic work with other themes. This shift in his choice of roles has been known as the "McConaissance" between 2011 to 2014. He said: In 2012, McConaughey starred alongside Channing Tatum in ''Magic Mike'', based on Tatum's early life, which was directed by Steven Soderbergh. He returned to his East Texas roots, working again with director Richard Linklater on ''Bernie,'' playing district attorney Danny Buck Davidson. In June 2012, McConaughey was invited to join the Academy of Motion Picture Arts and Sciences. In 2013, he portrayed Ron Woodroof in ''Dallas Buyers Club.'' The role of a rodeo rider who discovers he has AIDS and struggles to get treatment required him to lose nearly 50 lb (22 kg). The film earned McConaughey many acting awards, including the Screen Actors Guild Award for Outstanding Performance by a Male Actor in a Leading Role, the Golden Globe Award for Best Actor – Drama, and the Academy Award for Best Actor. His co-star Jared Leto won the Academy Award for Best Supporting Actor, making ''Dallas Buyers Club'' the first film since ''Mystic River'' (2003) to win both awards. He also featured in Martin Scorsese's ''The Wolf of Wall Street'' as Mark Hanna, an early boss of Jordan Belfort. During this time, McConaughey recorded a public service announcement in Austin, Texas for the LBJ Presidential Library. 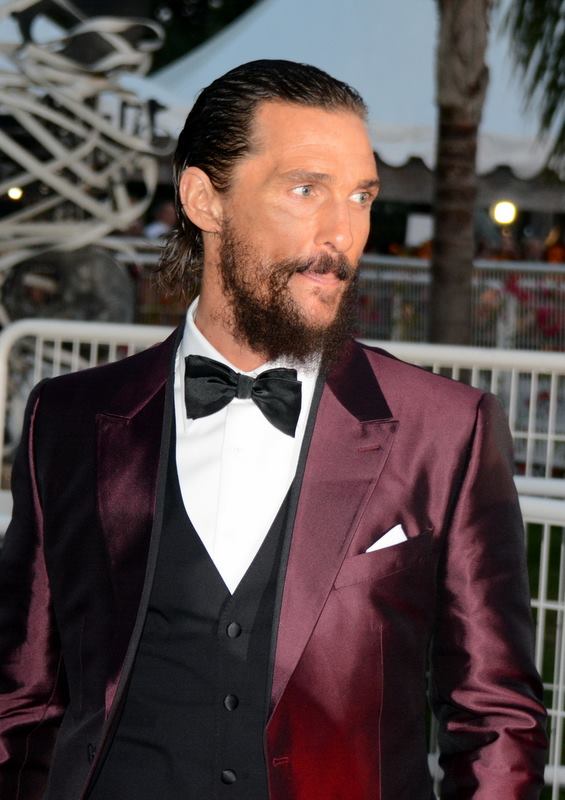 In April 2014, ''Time'' magazine included McConaughey in its annual Time 100 as one of the "Most Influential People in the World". In August 2014, the Lincoln Motor Company signed a multi-year collaboration with McConaughey for an ad campaign. The commercials, directed by Nicolas Winding Refn (''Drive''), featured McConaughey as a storyteller driving around in Lincoln's MKC crossover. Shortly after the commercials debuted in September 2014, they were parodied by Ellen DeGeneres, Conan O'Brien, Jim Carrey, ''South Park,'' and ''Saturday Night Live''. Overall sales for Lincoln increased by 25 percent one month after the ads debuted. The series of commercials starring McConaughey continued for several more years; during this period he also endorsed the MKZ sedan, MKX and Nautilus crossovers and Aviator SUV. On November 17, 2014, McConaughey received a star on the Hollywood Walk of Fame, located on 6931 Boulevard. Also that year, he shared star billing with Woody Harrelson in HBO's crime drama anthology series ''True Detective.'' For his role as Rust Cohle, he won the Critics' Choice Television Award for Best Actor in a Drama Series. He was also nominated for the Primetime Emmy Award for Outstanding Lead Actor in a Drama Series, which he lost to Bryan Cranston and the Golden Globe Award for Best Actor – Miniseries or Television Film. With his first Oscar win and the critical acclaim received for ''True Detective'', "McConaughey seems to be tapping into something essential, remaining himself while stretching, getting older while staying the same age." Critic Rachel Syme dubbed his recognition and performances while taking on more complex, dramatic roles as "The McConaissance". McConaughey also played Cooper, a widowed father and astronaut, alongside Anne Hathaway, Jessica Chastain, Michael Caine, Mackenzie Foy, and Casey Affleck in Christopher Nolan's science fiction film ''Interstellar'' (2014). After finishing Gus Van Sant's 2015 film ''The Sea of Trees'' with Ken Watanabe, in 2016, McConaughey starred in two films, ''Free State of Jones'' and ''Gold'', and voiced leading characters in two animated films, ''Kubo and the Two Strings'' and ''Sing''. In 2016, McConaughey was hired as creative director and celebrity spokesman for Wild Turkey's latest campaign, to bring in more women and more international customers. McConaughey starred as Walter Padick in the 2017 Stephen King adaptation ''The Dark Tower'', which received negative reactions from the critics. In 2018, he starred in the true life gangster drama ''White Boy Rick'', which gained mixed reviews. In 2019, he headlined the erotic thriller ''Serenity'', that also starred Diane Lane and Anne Hathaway. The film was panned by both critics and audiences after its release on January 25. McConaughey next had the starring role in Harmony Korine's ''The Beach Bum'', a comedy also featuring Zac Efron and Jonah Hill. The film was released on March 29, 2019. In late 2019, McConaughey appeared in the Guy Ritchie film ''The Gentlemen,'' playing fictional cannabis baron Mickey Pearson. In 2020, McConaughey published his memoir, ''Greenlights''. 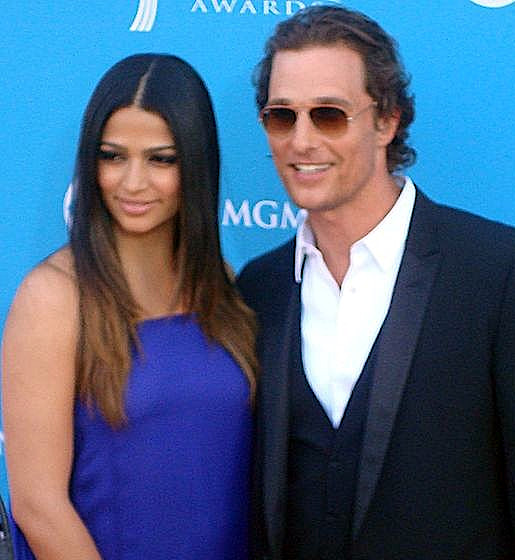 McConaughey met Camila Alves in 2006. He and Alves became engaged on December 25, 2011, and were married in a private Catholic ceremony on June 9, 2012, in Austin, Texas, where they reside. Together, they have three children: a son born in July 2008, a daughter born in January 2010, and a second son born in December 2012. McConaughey is a Christian and attends a non-denominational church. McConaughey is a lifelong fan of the Washington Football Team (formerly known as the Redskins), having begun following the team because of Chris Hanburger and his support of the Indians in Cowboy and Indian Western Movies. He even claims to have attended the last Redskins game at RFK Stadium and first game at Jack Kent Cooke Stadium as well as the first one at the renamed FedEx Field. He is also a lifelong fan of the Texas Longhorns, the team of his alma mater. In 2019, he became a minority owner of Austin FC, a team in Major League Soccer that began play in 2021. In March 2021, McConaughey confirmed that he is considering running for governor of Texas in 2022.

McConaughey started the ''just keep livin'' foundation, which is "dedicated to helping teenage kids lead active lives and make healthy choices to become great men and women". On February 25, 2016, McConaughey received the Creative Conscience award from unite4:humanity for his work with his foundation. McConaughey rescued various pets stranded after the flooding of New Orleans from Hurricane Katrina. In 2019, McConaughey officially became a professor of practice for the Department of Radio-Television-Film at the Moody College of Communication in his alma mater, UT-Austin; he had served as a visiting instructor since 2015. The first two sessions were about the filming of the movie ''Free State of Jones''.