The Maryland Terrapins football team represents the University of Maryland, College Park in the sport of American football. The Terrapins compete in the NCAA Division I Football Bowl Subdivision (FBS) and the Big Ten Conference. The Terrapins joined the Big Ten Conference on July 1, 2014, following 62 years in the Atlantic Coast Conference as a founding member. Mike Locksley is the head coach. Since 1950, the Terrapins have played their home games at Maryland Stadium in College Park, Maryland with occasional home games from time to time in Baltimore, making them one of two FBS football teams in the Baltimore–Washington metropolitan area (Navy Midshipmen) and the closest Football Bowl Subdivision team to Washington, D.C. The team's official colors of red, white, black, and gold have been in use in some combination since the 1920s and are taken from Maryland's state flag, and the Terrapins nickname — often abbreviated as "Terps" — was adopted in 1933 after a turtle species native to the state. Maryland shares storied rivalries with Virginia and West Virginia. The program's achievements have included one national championship, nine ACC championships, two Southern Conference championships, 12 consensus All-Americans, several Hall of Fame inductees, and 27 bowl game appearances. Maryland possesses the third-most ACC championships with nine, which places them behind Clemson and Florida State with 15 each. Many former Terrapins players and coaches have gone on to careers in professional football including 17 first-round NFL Draft picks. 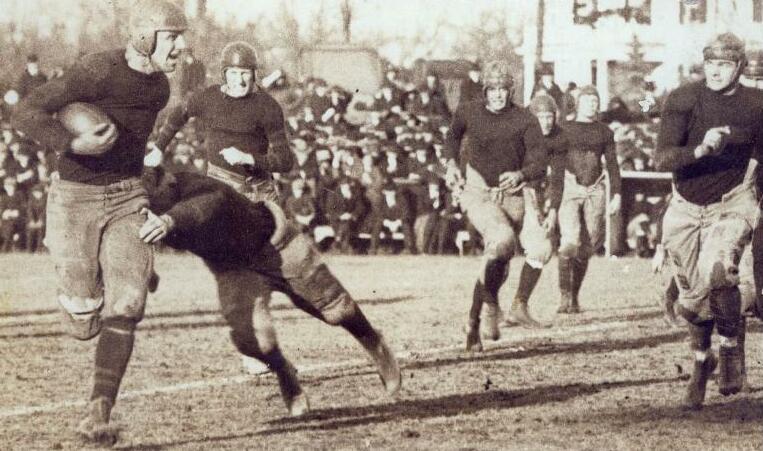 In 1892, the school then known as the Maryland Agricultural College fielded its first officially-sanctioned college football team. They went scoreless in all three of that season's games, but the following year, posted a perfect record of 6–0. For the first two decades of the program, the team primarily competed against local universities and high schools due to the prohibitive nature of long-distance travel at the time. In 1911, Harry C. "Curley" Byrd became head coach and held that position for more than two decades until he was named the university president. In 1921, Maryland joined the Southern Conference where it remained for thirty years. Between 1935 and 1946, the school had several coaches that achieved fame elsewhere: Frank Dobson, a former assistant coach under John Heisman; Clark Shaughnessy, architect of Stanford's undefeated 1940 turnaround; and Paul "Bear" Bryant, who later became the long-time Alabama head coach. Bryant resigned after one season when a player he had suspended was reinstated by President Byrd.

Jim Tatum was hired in 1947, after a brief stint at Oklahoma where he had led the Sooners to a conference championship in his only season there. He was Maryland's sixth head coach in eight years, but Tatum stayed for nine seasons and became the school's most successful head coach in modern history. During his tenure, he led Maryland to two national championships (one retroactive), three conference championships, three perfect seasons, six top-20 final rankings, and five bowl game appearances. Seven of his players were named first-team All-Americans, including five consensus All-Americans. Under Tatum, Maryland finished every season with a winning record. 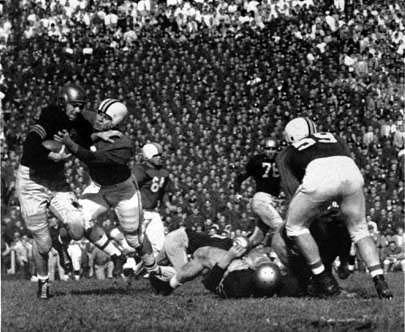 After the 1947 season, the Terrapins participated in their first bowl game, the 1948 Gator Bowl, in which they tied Georgia, 20–20. NCAA season-scoring leader Lu Gambino recorded all three Maryland touchdowns. In 1949, Maryland again played in the Gator Bowl, where they defeated 20th-ranked Missouri, 20–7. The Terrapins finished the season ranked 14th by the Associated Press. Maryland's current home field, Byrd Stadium, was constructed in 1950, and named in honor of former coach and contemporary Maryland president Curly Byrd. Maryland started the 1950 season ranked 15th and defeated Navy, 35–21, in the Byrd Stadium dedication game. The Terrapins won the 1951 Southern Conference co-championship alongside the Virginia Military Institute. Their perfect season culminated with an upset over first-ranked Tennessee in the . At the time, however, the wire services released their final rankings before the bowl games, and Maryland finished third in the Associated Press Poll.