Click Here for Items Related To - Mall of the Emirates


Mall of the Emirates ( ar|مول الإمارات) is a shopping mall in Dubai. Developed and owned by Majid Al Futtaim Properties, it opened in November 2005 and is located at interchange four on Sheikh Zayed road. The multi-level shopping mall currently features more than 630 retail outlets, 7900 parking spaces, over 100 restaurants and cafés, 80 luxury stores and 250 flagship stores. It has a total gross leasable area of 255,489 square meters. It also hosts family leisure activities including Ski Dubai (the Middle East's first indoor ski resort and snow park), the 500-seat capacity Dubai Community Theatre and Arts Centre and Magic planet, one of the largest indoor family entertainment centres in Dubai. In November 2005, it was named the World's Leading New Shopping Mall at the World Travel Awards in London. In 2017, Forbes named Mall of the Emirates as one of the top five shopping malls in Dubai.

The project was launched in October 2003 at an estimated cost of AED 800 million (US$218 million), and was scheduled to be completed in September 2005. The architecture in the three-storey complex combines Arabic and Mediterranean elements, with each level connected to a car park. The mall was designed by the American architectural firm F+A Architects. The main building contract was handled by Khansaheb, while the Ski Dubai contract was given to Pomagalski. The chair lifts in the snow park and the structural steel works were handled by Emirates Building System and the piling by Bauer. The mall opened for business on 28 September 2005 with an official inauguration in November.

The mall also hosts a number of family leisure offerings. These include the Magic Planet family entertainment area, a 20-screen VOX Cinema, Ski Dubai, and the Dubai Community Theatre and Arts Centre. 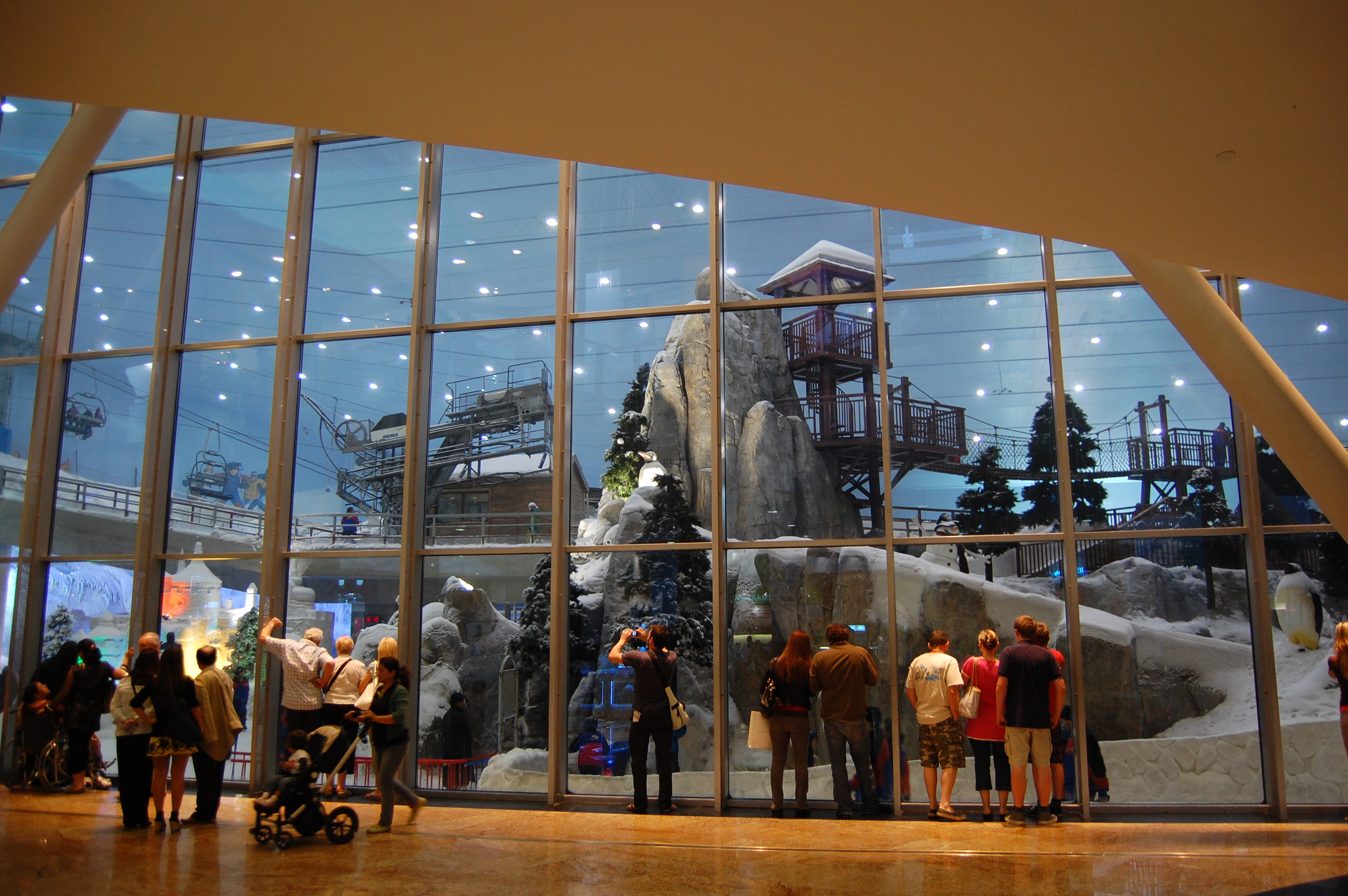 Ski Dubai is a large indoor skiing facility at Mall of the Emirates, offering snowboarding, ski lessons, children's play area and cafe. It opened in November 2005 and houses the world's largest indoor snow park. It is operated by Majid Al Futtaim Leisure & Entertainment.

Dubai Community Theatre and Arts Centre (DUCTAC) is a non-profit, cross-community creative centre that opened in November 2006, under the patronage of Princess Haya bint Hussein. It was spread over 7,424 square metres on the second floor of the Mall of the Emirates. There were two-level theatre and rehearsal spaces, along with an arts centre housing galleries, classrooms, studios, music school, library and high specification visual arts gallery. In July 2018, Dubai Community Theatre & Arts Centre (DUCTAC) closed at the Mall of the Emirates.

Magic Planet is an indoor family entertainment centre with two entertainment zones for children and young adults. It has a ten-pin bowling alley with 12 lanes, pool and billiard tables, 180 amusement machines, and other attractions including a carousel, racing simulators, Jumping Star, soft play and bumper cars. It also includes the RoboCoaster (a two-person thrill ride unique to the Middle East) and XD Dark Ride, a "7D" adventure with 3D movie graphics and 4D effects including motion, wind and light.

Mall of the Emirates’ AED 1 billion multi-stage redevelopment project, Evolution 2015, completed in September 2015. The new Fashion District featuring 30 contemporary brands marked the completion of Phase 1. Phase 2 has added a second taxi rank located next to Ski Dubai on level 4. Phase 3, unveiled a new retail extension on Level 2 – an additional 36,000sqm of retail space added to include 40 new retailers On 10 September 2013, Mall of the Emirates announced a multi-stage redevelopment project worth an estimated AED 1 billion (US$274 million), which is called as Evolution 2015. Phase one of the project which will increase 5,000 sqm area more is already completed but expected to open in mid-2015 includes new shopping, dining and entertainment concepts. However, due to the limitations of its location, the mall will be expanded upwards by constructing a second floor on top of the Carrefour area. On 25 August 2014, Mall of the Emirates announced phase two of its strategic redevelopment project, Evolution 2015 which is now currently underway. In this stage, the mall will be expanded by gross leasable area of 26,000 meter sq. This project includes an additional of 1300 new spaces for car parking, 12 new restaurants, new prayer rooms for both, men and women and the relocation of the current VOX Cinemas which will now have 24 screens. The new expansion project "Evolution 2015" was officially opened on 28 September 2015 which increased the gross leasable area to 26,000 meter sq. On 30 September 2015, David Beckham visited the mall for the inauguration of the Adidas store which was built in the newly expanded section.