The London sewerage system is part of the water infrastructure serving London, England. The modern system was developed during the late 19th century, and as London has grown the system has been expanded. It is currently owned and operated by Thames Water and serves almost all of Greater London.

During the early 19th century the River Thames was an open sewer, with disastrous consequences for public health in London, including cholera epidemics. These were caused by enterotoxin-producing strains of the bacterium ''Vibrio cholerae''. Although the contamination of the water supply was correctly diagnosed by Dr John Snow in 1849 as the method of communication, it was believed that miasma, or bad air, was responsible right up to the outbreak of 1866. Proposals to modernise the sewerage system had been made in the early 1700s but the costs of such a project deterred progress. Further proposals followed in 1856, but were again neglected due to the costs. However, after the Great Stink of 1858, Parliament realised the urgency of the problem and resolved to create a modern sewerage system. Joseph Bazalgette, a civil engineer and Chief Engineer of the Metropolitan Board of Works, was given responsibility for the work. He and his colleagues, including William Haywood, designed an extensive underground sewerage system that diverted waste to the Thames Estuary, downstream of the main centre of population. Six main interceptor sewers, totalling almost 160 km (100 miles) in length, were constructed, some incorporating stretches of London's "lost" rivers. Three of these sewers were north of the river, the southernmost, low-level one being incorporated in the Thames Embankment. The Embankment also allowed new roads, new public gardens, and the Circle line of the London Underground. Victoria Embankment was finally officially opened on 13 July 1870. The intercepting sewers, constructed between 1859 and 1865, were fed by 450 miles (720 km) of main sewers that, in turn, conveyed the contents of some 13,000 miles (21,000 km) of smaller local sewers. Construction of the interceptor system required 318 million bricks, 2.7 million cubic metres of excavated earth and 670,000 cubic metres of concrete. The innovative use of Portland cement strengthened the tunnels, which were in good order 150 years later. Gravity allows the sewage to flow eastwards, but in places such as Chelsea, Deptford and Abbey Mills, pumping stations were built to raise the water and provide sufficient flow. Sewers north of the Thames feed into the Northern Outfall Sewer, which feeds into a major treatment works at Beckton. South of the river, the Southern Outfall Sewer extends to a similar facility at Crossness. During the 20th century, major improvements were made to the sewerage system and to the sewage treatment provision to substantially reduce pollution of the Thames Estuary and the North Sea. 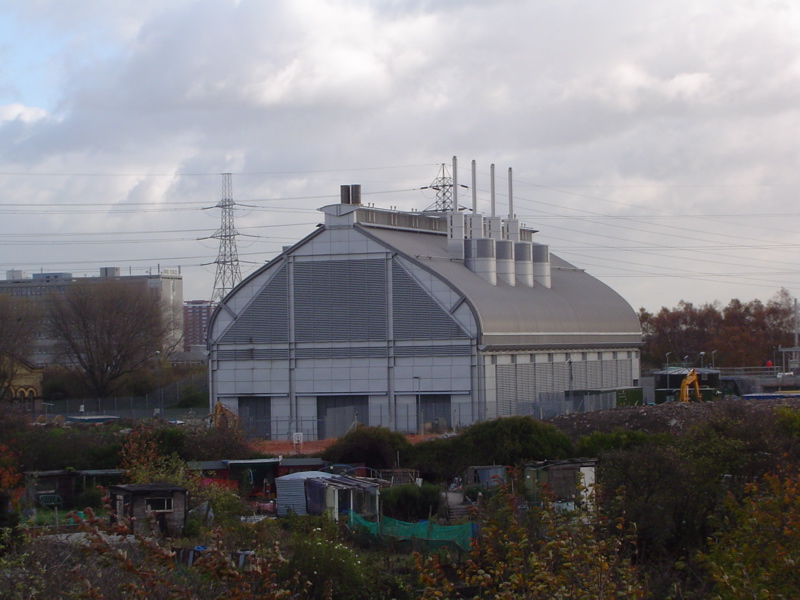 The original system was designed to cope with 6.5 mm (1/4") per hour of rainfall within the catchment area, and supported a smaller population than today's. London's growth has put pressure on the capacity of the sewerage system. During storms, for example, high levels of rainfall (in excess of 6 mm per hour) in a short period of time can overwhelm the system. Sewers and treatment works are unable to cope with the large volumes of rainwater entering the system. Rainwater mixes with sewage in combined sewers and excess mixed water is discharged into the Thames. If this does not happen quickly enough, localised flooding occurs (surcharge). Such sanitary sewer overflow can mean streets becoming flooded with a mixture of water and sewage, causing a health risk. In redeveloping the Isle of Dogs and Royal Docks areas of east London during the late 1980s and early 1990s, the London Docklands Development Corporation invested in major new drainage infrastructure to manage future sewage and surface water run-off from proposed developments. Consulting engineer Sir William Halcrow & Partners designed a system of large diameter tunnels served by new pumping stations. In the Royal Docks, approximately 16 miles (25 km) of foul and surface water drains were built, plus pumping stations at Tidal Basin (designed by Richard Rogers Partnership) and North Woolwich (architect: Nicholas Grimshaw). The Isle of Dogs drainage network is served by a stormwater pumping station situated in Stewart Street, designed by John Outram Associates.