Click Here for Items Related To - Knights Of Pythias


Knights of Pythias in a parade in Toledo, Ohio, 1890s The Knights of Pythias is a fraternal organization and secret society founded in Washington, D.C., on 19 February 1864. The Knights of Pythias is the first fraternal organization to receive a charter under an act of the United States Congress. It was founded by Justus H. Rathbone, who had been inspired by a play by the Irish poet John Banim about the legend of Damon and Pythias. This legend illustrates the ideals of loyalty, honor, and friendship that are the center of the order. The order has over 2,000 lodges in the United States and around the world, with a total membership of over 50,000 in 2003. The order is headquartered in Stoughton, Massachusetts. Some lodges meet in structures referred to as Pythian Castles.

The structure of the Knights of Pythias is three-tiered. The local units used to be called "Castles," but over time came to be called "Subordinate Lodges." State and provincial organizations are called "Grand Lodges" and the national structure is called the "Supreme Lodge" and meets in convention biennially. The officers of the Supreme Lodge include the sitting Past Supreme Chancellor, Chancellor, Vice-Chancellor, Prelate, Secretary, Treasurer, Master at Arms, Inner Guard and Outer Guard. The order's auxiliaries are the Pythian Sisters, and two youth organizations: the Pythian Sunshine Girls and the Junior Order of Princes of Syracuse for boys.

Membership has historically been open to males in good health who believe in a Supreme Being. Maimed individuals were not admitted until 1875. Members are accepted by blackball ballot. A member must be at least 18 years of age, and must take the following oath: By the end of the so-called "Golden Age of Fraternalism" in the early 1920s, the order had nearly a million members. By 1979, however, this number had declined to fewer than 200,000.

The ranks of Pythian Knighthood in a subordinate lodge (or "Castle") are: #Page #Esquire #Knight In 1877, the order adopted an optional rank, called the Endowment Rank, which provided fraternal insurance benefits. In 1930, this department split from the Knights of Pythias and became a mutual life insurance company, later known as the American United Insurance Company. The Knights of Pythias also has a side degree, the Dramatic Order of the Knights of Khorassan, which itself has a female auxiliary, the Nomads of Avrudaka. Finally, members who obtained the rank of Knight were eligible to join the now-defunct Uniform Rank, which participated in parades and other processions.

Early in the group's history, when a man was inducted into the Knights of Pythias, he received a ceremonial sword. Such a sword might be given to a Pythian by family members, business associates, or others as a token of esteem. In recent decades, rather than require each member to own a sword, the local chapter maintains a collection of swords for use by its members. Long, narrow swords are generally used in public during parades and drills, while short swords are used in displays. Markings on swords varied widely. Most swords were inscribed with the acronym "FCB", which stands for the Pythian motto ("Friendship, Charity, Benevolence"). Images on swords were also somewhat common, and included: A man, woman, and child (symbolic of Pythias saying good-bye to his family); a man looking out of a building, with a group of people below (symbolic of Damon's pending execution); a man between some pillars, pulling them down (similar to Samson destroying his enemy's temple); or various types of weapons (swords, axes, hammers, etc.). A full Knight of the Pythian order often inscribed his sword with the image of a knight's helmet with a lion on the crest. Many also carried the image of a sprig of myrtle (the Pythian symbol of love) or a falcon (the Pythian symbol of vigilance). Swords owned by a member of the Uniformed Rank might be inscribed with the acronym "UR," a dove, or a lily.

The order provides for "worthy Pythians in distress" and has given aid to victims of national or sectional disasters. It runs camps for underprivileged youth and homes for aged members. It has sponsored scholarship funds, blood drives, highway safety programs, and the Cystic Fibrosis Research Foundation.


Knights of Pythias of North and South America, Europe, Asia, and Africa

After a black lodge was denied a charter by the Knights of Pythias' Supreme Lodge meeting in Richmond, Virginia on March 8, 1869, a number of black Americans who had been initiated into the order formed their own Pythian group, the Knights of Pythias of North and South America, Europe, Asia, and Africa. By 1897, the KPNSAEAA had 40,000 members, with Grand Lodges in 20 states and other lodges in the West Indies and Central America. It distributed $60,000 worth of benefits annually and had a woman's auxiliary and uniformed rank.

The Grand Lodge of Ontario was instituted on April 8, 1872. Rowena L. Rooks composed "K of P grand march or piano" which was dedicated to Collin H. Rose, Grand Chancellor, and the officers and representatives of the Grand Lodge K of P of Ontario, Canada. The march sheet music, which was published in London, Ontario, by C. F. Colwell, ''circa'' 1876, was illustrated with the Knights of Pythias emblem and Latin motto, ''Amico Fidus ad Aras'', or in English, "True friends are a refuge.".

In 1892, the Supreme Lodge ruled that the work of the order would only be conducted in English. This upset some members who were accustomed to using German. After this ruling was reiterated at the Supreme Lodges of 1894 and 1895, a number of German-speaking Pythians split off and formed the Improved Order, Knights of Pythias at a convention in Indianapolis in June 1895. The new order was reportedly not very popular, and a movement toward reconciliation occurred a few years later. 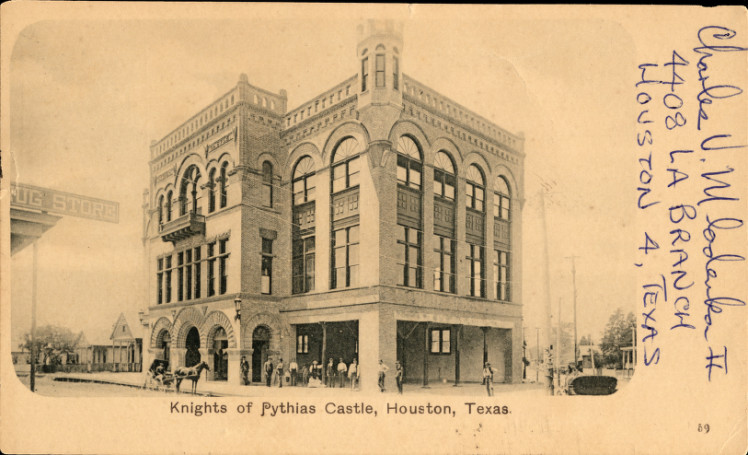 The Knights are mentioned in ''Sunshine Sketches of a Little Town'' by Stephen Leacock; an ill-fated marine excursion organised by the Knights is the subject of Chapter 3, entitled "The Marine Excursion of the Knights of Pythias". Several characters in the book are said to be members of the Knights. In the Marx Brothers movie ''Animal Crackers'', Groucho as the character Captain Spaulding reports on his recent big game hunting trip to Africa. He says, "The principal animals in Africa are moose, elks and Knights of Pythias."