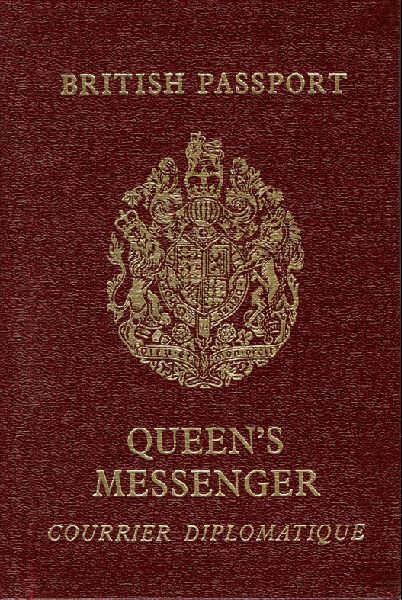 The Corps of Queen's Messengers are
courier A courier is a company, an employee of that company or a person who delivers a message, package or letter from one place or person to another place or person. Duties and functions Couriers are distinguished from ordinary mail The mail or po ...

s employed by the British
Foreign, Commonwealth and Development Office The Foreign, Commonwealth & Development Office (FCDO) is a department Department may refer to: * Departmentalization, division of a larger organization into parts with specific responsibility Government and military *Department (country subd ...
(FCDO). They hand-carry secret and important documents to British embassies, high commissions, and consulates around the world. Many Queen's Messengers were retired
Army An army (from Latin ''arma'' "arms, weapons" via Old French ''armée'', "armed" eminine, ground force or land force is a fighting force that fights primarily on land. In the broadest sense, it is the land-based military branch Military branch ...
personnel. Messengers generally travel in plain clothes in
business class Business class is a travel class Boeing 747-400 The Boeing 747-400 is a wide-body airliner A wide-body aircraft, also known as a twin-aisle aircraft, is an airliner An airliner is a type of aircraft for transporting passengers and ...
on scheduled airlines with their consignment. The safe passage of
diplomatic bag A diplomatic bag, also known as a diplomatic pouch, is a container with certain legal protections used for carrying official correspondence or other items between a diplomatic mission A diplomatic mission or foreign mission is a group of p ...
gage is guaranteed by Articles 27 and 36 of the
Vienna Convention on Diplomatic Relations The Vienna Convention on Diplomatic Relations of 1961 is an international treaty that defines a framework for diplomatic relations between independent countries. It specifies the privileges of a diplomatic mission that enable diplomats to perform ...

, and for reasons of state secrecy, the diplomatic bag does not go through normal airport baggage-checks and must not be opened, x-rayed, weighed, or otherwise investigated by customs of a foreign state, airline security staff or anyone else. The only exception is if there is serious evidence that it might contain prohibited or quarantine controlled materials of the destination state. The bag is closed with a tamper-proof seal and has its own diplomatic passport. The Queen's Messenger has the status of a
diplomatic courier ''Diplomatic Courier'' is a 1952 spy Espionage or spying is the act of obtaining secret or confidential information or divulging of the same without the permission of the holder of the information. A person who commits espionage is calle ...
and cannot be detained by foreign governments. British diplomatic bags and Queens Messengers do not benefit from these immunities in the UK, and HMRC has the right to examine UK diplomatic bags. The messenger and the messenger's personal luggage can be required to go through normal security screening.

The formal role and title ‘Royal Messenger’, whether to King or Queen, is most certainly evident within the retinues of the English monarchy, certainly extending back to the early 12th century. They were termed 'Nuncii' or 'Cursores', depending on whether they travelled by horse or foot, and were well paid. Their role was sufficiently important that individuals with this role can be identified in records from the reigns of Kings John, Henry III, and the first three Edwards. They carried messages around England and to other countries on behalf of the government. They were the primary means for communication with local officials such as sheriffs and mayors and travelled in circuits so that the King and his staff had regular updates on the actions that had been commanded. They also sometimes transported money or valuables around the country. The number employed was between 30 and 60. A noted 15th century King's Messenger was John Norman, who was appointed in 1485 by King
Richard III Richard III (2 October 145222 August 1485) was King of England This list of kings and queens of the Kingdom of England begins with Alfred the Great, who initially ruled Kingdom of Wessex, Wessex, one of the heptarchy, seven Anglo-Saxon ...

to hand-deliver secret documents. During his exile,
Charles II

appointed four trusted men to convey messages to Royalist forces in England. As a sign of their authority, the King broke four silver greyhounds from a bowl familiar to royal courtiers, and gave one to each man. A silver greyhound thus became the symbol of the Service. On formal occasions, the Queen's Messengers wear this badge from a ribbon, and on less formal occasions male messengers wear ties with a discreet greyhound pattern while working. In 1824 the messengers became a formal part of the UK Foreign Office.

Modern communications have diminished the role of the Queen's Messengers, but as original confidential documents still need to be conveyed securely between countries, their function remains valuable, but declining. In 1995 a
parliamentary question A question time in a parliament occurs when members of the parliament ask questions of government ministers (including the prime minister), which they are obliged to answer. It usually occurs daily while parliament is sitting, though it can be ca ...
put the number of Messengers then at 27. The number in March 2015 was sixteen full-time and two part-time, and the departmental headcount was nineteen. In December 2015 an article in the ''
Daily Express The ''Daily Express'' is a daily national middle-market and conservative Conservatism is an aesthetic Aesthetics, or esthetics (), is a branch of philosophy that deals with the nature of beauty and taste (sociology), taste, as ...
'' suggested that the Queen's Messenger service was "facing the chop by cost-cutting Foreign Office mandarins who see them as a legacy of a by-gone age". However the service continued to exist in 2021. The
British Rail Class 67 The Class 67 locomotives are a class of Bo-Bo diesel-electric locomotives which were built for the DB Cargo UK, English Welsh & Scottish Railway (EWS) between 1999 and 2000 by Alstom at Meinfesa in Valencia, Spain with drive components (engine, g ...
diesel locomotive 67005 bears the name ''Queen's Messenger''.