John Kenneth Blackwell (born February 28, 1948) is an American politician, author, and conservative activist who served as the mayor of Cincinnati, Ohio (1979–80), the Ohio State Treasurer (1994–99), and Ohio Secretary of State (1999–2007). He was the Republican candidate for governor of Ohio in 2006, the first African-American major-party candidate for governor of Ohio. He is currently a Senior Fellow for Family Empowerment with The Family Research Council.

Blackwell was born in Alliance, Ohio, the son of Dana, a part-time nurse, and George Blackwell, a meatpacker. He has two brothers, Carl and Charles. He married his wife Rosa in 1969 while he was in college. They have three children, Kimberly, Rahshann (a Denver resident and Ohio Northern Law School graduate), and Kristin. Blackwell attended Xavier University in Cincinnati, Ohio on a football scholarship. He received a Bachelor of Science degree in psychology from Xavier in 1970 and his Master of Education degree, also from Xavier, in 1971. After college, he was invited to the Dallas Cowboys' training camp; he gave up football when told he would have to convert from linebacker to offensive lineman. He taught at Xavier from 1974 to 1991. He has served as a trustee of Wilberforce University and Wilmington College. On April 25, 1987 Kenneth Blackwell was made a Mason-on-Sight by Grand Master Odes J. Kyle Jr. of the Most Worshipful Prince Hall Grand Lodge of Ohio; thereby making him a Prince Hall Freemason. This African-American branch of Freemasonry was founded in the 19th century. 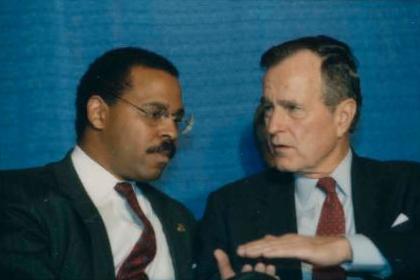 Blackwell became involved in politics through the Charter Party, Cincinnati's third party, which is generally supported by left-leaning voters. He was elected to and served on the Cincinnati city council. In 1978, he was elected as Mayor of Cincinnati, serving into 1980. One of his first priorities was to establish a crowd control task force, to study better methods of crowd control and injury prevention. This was in response to the deaths of 11 concert fans at a concert by the British rock group The Who at Riverfront Coliseum on December 3, 1979. When Blackwell began to consider statewide and national offices, he became a Republican. He was appointed to serve in the administration of President George H. W. Bush, as undersecretary in the Department of Housing and Urban Development from 1989 to 1990. He returned to Cincinnati to run for the first district seat in the United States House of Representatives which was being vacated by Tom Luken. Blackwell lost to Luken's son, Charlie Luken, by a narrow 51% to 49% margin. Following his close defeat, Blackwell was appointed by President Bush as US ambassador to the United Nations Commission on Human Rights. Blackwell served in that post from 1992 to 1993. In 1994 Gov. George Voinovich appointed Blackwell as Ohio State Treasurer to complete the term of Mary Ellen Withrow. She had been appointed as U.S. treasurer by President Bill Clinton. Blackwell was elected treasurer in 1994 and was elected Ohio Secretary of State in 1998. That year, Blackwell considered a run for governor, but Ohio Republican Party chairman Robert T. Bennett persuaded Blackwell to run for secretary of state instead, leaving the governorship open to Bob Taft. Blackwell was national chairman of longtime friend Steve Forbes' presidential campaign in 2000. Blackwell was re-elected secretary of state in 2002.

Involvement in the 2004 U.S. presidential election

As Secretary of State of a hotly contested swing state, Blackwell played a prominent role in the 2004 national election. He held the position of ''Chief Elections Officer'', overseeing Ohio's elections process. In testifying to Congress in 2005 about the conduct of the 2004 election in Ohio, Blackwell said that every Republican holder of statewide office in Ohio had been named as an honorary "co-chair" of the 2004 Bush campaign, that the position carried no responsibilities, and that previous Ohio Secretaries of State from both parties had held similar honorary positions. Prior to the 2004 presidential election, Blackwell had announced he would enforce an Ohio State election law decreeing that any person who appeared at a polling place to vote but whose registration could not be confirmed would be given only a provisional ballot; if it were later determined that the person had attempted to vote in the wrong precinct, then their provisional ballot would not be counted. He directed poll workers to refuse to distribute provisional ballots unless they were satisfied as to the voter's residence. The Democratic party filed a lawsuit claiming that the policy was "intended to disenfranchise minority voters" and in violation of federal election law, specifically section 302 of the Help America Vote Act (HAVA). On October 21, 2004, U.S. District Court Judge James G. Carr issued an order rejecting Blackwell's policy. Blackwell said that he would go to jail rather than comply. Blackwell appealed the decision to the United States Court of Appeals for the Sixth Circuit. On October 26, 2004, the Court of Appeals unanimously affirmed in part and reversed in part. The court agreed with the plaintiffs and the District Court that Blackwell's directive violated HAVA to the extent that it empowered poll workers to withhold a provisional ballot based on their "on-the-spot determination at the polling place." The court ruled that if a subsequent review concluded that the voter was not entitled to vote in that precinct, then the provisional ballot would not be counted
(pdf)