''The Katzenjammer Kids'' is an American comic strip created by Rudolph Dirks in 1897 and later drawn by Harold Knerr for 35 years (1914 to 1949). It debuted December 12, 1897, in the ''American Humorist'', the Sunday supplement of William Randolph Hearst's ''New York Journal''. Dirks was the first cartoonist to regularly express comic characters' dialogue using speech balloons. The comic strip was turned into a stage play in 1903. It inspired several animated cartoons and was one of 20 strips included in the Comic Strip Classics series of U.S. commemorative postage stamps. After a series of legal battles between 1912 and 1914, Dirks left the Hearst organization and began a new strip, first titled ''Hans and Fritz'' and then ''The Captain and the Kids''. It featured the same characters seen in ''The Katzenjammer Kids'', which was continued by Knerr. The two separate versions of the strip competed with each other until 1979, when ''The Captain and the Kids'' ended its six-decade run. ''The Katzenjammer Kids'' published its last strip on January 1, 2006, but is still distributed in reprints by King Features Syndicate, making it the oldest comic strip still in syndication and the longest-running ever. 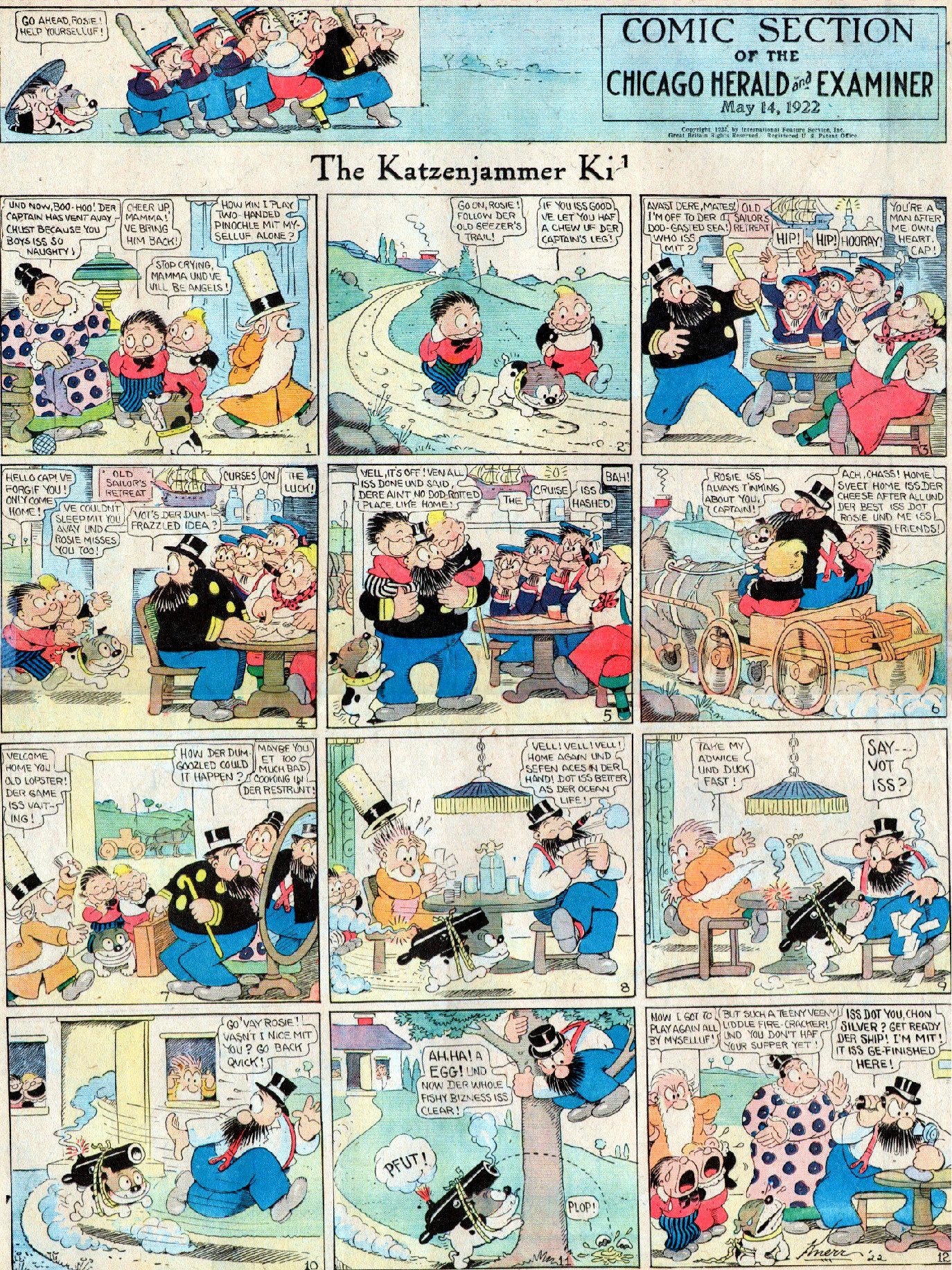 ''The Katzenjammer Kids'' was inspired by ''Max and Moritz'', a children's story of the 1860s by German author Wilhelm Busch. ''Katzenjammer'' translates literally as ''the wailing of cats'' (i.e. "caterwaul") but is used to mean ''contrition after a failed endeavor'' or ''hangover'' in German (and, in the latter sense, in English too). Whereas Max & Moritz were grotesquely but comically put to death after seven destructive pranks, the Katzenjammer Kids and the other characters still thrive.

''The Katzenjammer Kids'' was so popular that it became two competing comic strips and the subject of a lawsuit. This happened because Dirks, in 1912, wanted to take a break after drawing the strip for 15 years, but the Hearst newspaper syndicate would not allow it. Dirks left anyway, and the strip was taken over by Harold Knerr. Dirks' last strip appeared March 16, 1913. Dirks sued, and after a long legal battle, the Hearst papers were allowed to continue ''The Katzenjammer Kids'', with Knerr as writer and artist. He took over permanently in the summer of 1914. However, Dirks was allowed to create an almost identical strip of his own for the rival Pulitzer newspapers,