John Milton (9 December 16088 November 1674) was an English poet and intellectual who served as a civil servant for the Commonwealth of England under its Council of State and later under Oliver Cromwell. He wrote at a time of religious shifts and political instability, and is best known for his epic poem ''Paradise Lost'' (1667). Written in blank verse, ''Paradise Lost'' is widely considered to be one of the greatest works of literature ever written. Writing in English and Latin, he achieved international renown within his lifetime; his celebrated ''Areopagitica'' (1644), written in condemnation of pre-publication censorship, is among history's most influential and impassioned defences of freedom of speech and freedom of the press. His desire for freedom extended into his style: he introduced new words (coined from Latin and Ancient Greek) to the English language, and was the first modern writer to employ unrhymed verse outside of the theatre or translations. William Hayley's 1796 biography called him the "greatest English author", and he remains generally regarded "as one of the pre-eminent writers in the English language", though critical reception has oscillated in the centuries since his death (often on account of his republicanism). Samuel Johnson praised ''Paradise Lost'' as "a poem which...with respect to design may claim the first place, and with respect to performance, the second, among the productions of the human mind", though he (a Tory and recipient of royal patronage) described Milton's politics as those of an "acrimonious and surly republican". Poets such as William Blake, William Wordsworth and Thomas Hardy revered him.

The phases of Milton's life parallel the major historical and political divisions in Stuart Britain. Milton studied, travelled, wrote poetry mostly for private circulation, and launched a career as pamphleteer and publicist under the increasingly personal rule of Charles I and its breakdown into constitutional confusion and war. The shift in accepted attitudes in government placed him in public office under the Commonwealth of England, from being thought dangerously radical and heretical, and he even acted as an official spokesman in certain of his publications. The Restoration of 1660 deprived Milton, now completely blind, of his public platform, but this period saw him complete most of his major works of poetry. Milton's views developed from his very extensive reading, as well as travel and experience, from his student days of the 1620s to the English Civil War. By the time of his death in 1674, Milton was impoverished and on the margins of English intellectual life, yet famous throughout Europe and unrepentant for his political choices.

John Milton was born in Bread Street, London on 9 December 1608, the son of composer John Milton and his wife Sarah Jeffrey. The senior John Milton (1562–1647) moved to London around 1583 after being disinherited by his devout Catholic father Richard "the Ranger" Milton for embracing Protestantism. In London, the senior John Milton married Sarah Jeffrey (1572–1637) and found lasting financial success as a scrivener. He lived in and worked from a house on Bread Street, where the Mermaid Tavern was located in Cheapside. The elder Milton was noted for his skill as a musical composer, and this talent left his son with a lifelong appreciation for music and friendships with musicians such as Henry Lawes. Milton's father's prosperity provided his eldest son with a private tutor, Thomas Young, a Scottish Presbyterian with an M.A. from the University of St. Andrews. Research suggests that Young's influence served as the poet's introduction to religious radicalism. After Young's tutorship, Milton attended St Paul's School in London. There he began the study of Latin and Greek, and the classical languages left an imprint on both his poetry and prose in English (he also wrote in Latin). 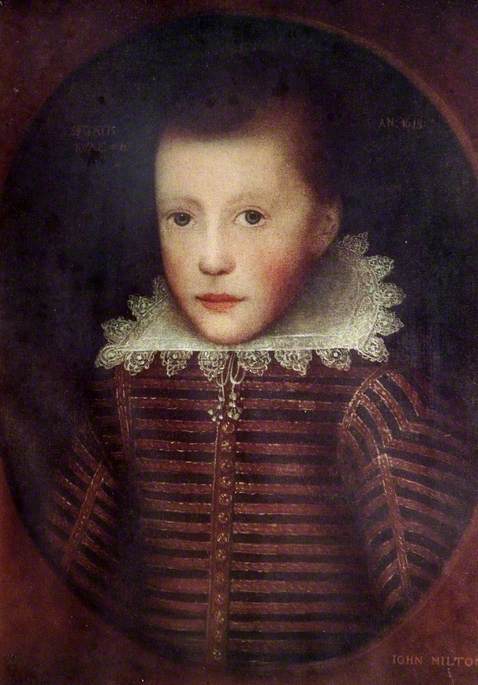 Milton's first datable compositions are two psalms done at age 15 at Long Bennington. One contemporary source is the ''Brief Lives'' of John Aubrey, an uneven compilation including first-hand reports. In the work, Aubrey quotes Christopher, Milton's younger brother: "When he was young, he studied very hard and sat up very late, commonly till twelve or one o'clock at night". Aubrey adds, "His complexion exceeding faire—he was so faire that they called him the Lady of Christ's College." In 1625, Milton began attending Christ's College, Cambridge. He graduated with a B.A. in 1629, ranking fourth of 24 honours graduates that year in the University of Cambridge. Preparing to become an Anglican priest, Milton stayed on and obtained his Master of Arts degree on 3 July 1632. Milton may have been rusticated (suspended) in his first year for quarrelling with his tutor, Bishop William Chappell. He was certainly at home in London in the Lent Term 1626; there he wrote his ''Elegia Prima'', a first Latin elegy, to Charles Diodati, a friend from St Paul's. Based on remarks of John Aubrey, Chappell "whipt" Milton.