in March 1877 and the famous
Ashes Test match

of 1882. Such was his skill in the position that he revolutionised the art of wicket-keeping and was known as the "prince of wicket-keepers". Late in his career, he captained the Australian team.

Blackham was born in the inner-Melbourne suburb of Fitzroy North, the son of newsagent Frederick Kane Blackham and his wife Lucinda (née McCarthy). Blackham became a bank clerk, and held a position in the
Colonial Bank of Australasia The Colonial Bank of Australasia was incorporated in Melbourne, Victoria, in 1856 by act of council. Branches were established throughout Greater Melbourne and Victoria. Agents ;Australia: * New South Wales and Queensland: The Commercial Banking Co ...
for many years. It is said that his thick dark beard, perceived then as a sign of an equable and reliable nature, reassured his customers. His brother-in-law was George Eugene "Joey" Palmer.

Blackham was included in the first eleven of the Carlton Cricket Club as a batsman at the age of sixteen. He first appeared for the Victorian team in 1874, and remained an automatic selection as the team's wicket-keeper for over twenty years. He was a member of the first eight Australian cricket teams to visit England. He was one of the first wicket-keepers to stand up close to the stumps, even to the fastest bowlers, wearing gloves that Jack Pollard describes as "little more than gardening gloves". He eliminated the need for a long-stop, and Pollard says that "... in England on one of his trips there a group of clergymen complained that he was a danger to the wellbeing of cricket, encouraging as he did the abolition of long-stop, the clergy's traditional fielding spot in village teams." Blackham was selected for the very first Test match, held at
Melbourne Melbourne ( ) is the capital Capital most commonly refers to: * Capital letter Letter case (or just case) is the distinction between the letters that are in larger uppercase or capitals (or more formally ''majuscule'') and smaller ...

refused to play in the match, because Blackham was preferred to Spofforth's
New South Wales New South Wales (abbreviated as NSW) is a state State may refer to: Arts, entertainment, and media Literature * ''State Magazine'', a monthly magazine published by the U.S. Department of State * The State (newspaper), ''The State'' (newspape ...
teammate
Billy Murdoch William Lloyd Murdoch (18 October 1854 – 18 February 1911) was an Australian cricket Cricket is a Bat-and-ball games, bat-and-ball game played between two teams of eleven players each on a cricket field, field at the centre of which ...

. In the Test match, Blackham took three catches and made the first Test-Match stumping, when he dismissed
Alfred Shaw Alfred Shaw (29 August 1842 – 16 January 1907) was an eminent Victorian cricket Cricket is a bat-and-ball gameBat-and-ball may refer to: *Bat-and-ball games Bat-and-ball games (or safe haven games) are field games played by two oppo ...
off the bowling of Tom Kendall in England's second innings. In 1878, he represented his country for the first time overseas, as a member of the inaugural Australian cricket team to tour England and North America. Described by teammates as the "prince of wicket-keepers" and one of Australia's first cricketing heroes, "Black Jack" Blackham (nicknamed for his dark beard) was Australia's regular wicket-keeper from 1877 to 1894.

Jack Blackham spent most of the 1st day of the 1st Test Match in the Home Dressing Room as he was batting at No: 8. He made his Test debut when Ned Gregory, Australia' No: 7 achieved the dubious distinction of being the 1st Test Batsman to score a duck. Australia were 143 for 6. He became Charles Bannerman's 7th partner (Bannerman was 107 not out). Jack Blackham was 22 years 308 days old and became, at that time the youngest Test player in Test cricket. Previously the youngest had been Tom Horan (Australia No: 3) who was 64 days older than Jack Blackham.

As a right-hand batsman, Blackham was a useful lower-order player. At the age of forty, he played his last Test Match at the SCG against
Andrew Stoddart Andrew Ernest Stoddart (11 March 1863 – 4 April 1915) was an English sportsman who played international cricket for England cricket team, England, and rugby union for England national rugby union team, England and the British and Irish Lions, ...
's English team. As Blackham spun the coin on that opening morning, "Stoddy" remarked, "Someone will be swearing directly, Jack. I hope it's you." 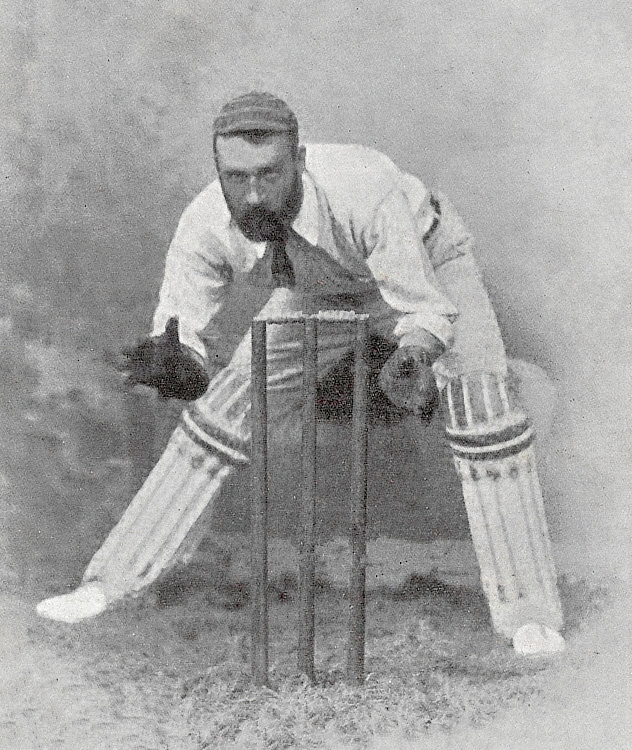 It was not: Blackham won the toss and elected to bat, and made 74 runs in a partnership of 154 with
Syd Gregory Sydney Edward Gregory (14 April 1870 – 1 August 1929), sometimes known as Edward Sydney Gregory, was a cricketer who played for New South Wales cricket team, New South Wales and Australia national cricket team, Australia. At the time of his re ...

, who scored 201. This helped Australia on its way to a massive (and apparently unassailable) total of 586. After England followed on, Blackham's men were eventually left to make just 176 in the final innings to win. They had scored 113 for the loss of just two wickets at the close of play on the fifth evening, but it rained hard during the night.

, however, slept right through the storm and was blissfully unaware of it when he got up the following morning, a bright and sunny one. Giffen greeted his captain cheerily at breakfast but was met with a face as "long as a coffee-pot". Blackham told him what had happened and forecast ominously the danger as the Australian team travelled to the ground, the carriage leaving deep furrows in the moist turf. Blackham was right to be so concerned: on a horrific "sticky dog", his side eventually collapsed to 166 all out, losing the match by ten runs. At the close, with the Englishmen celebrating, "Blackham walked up and down the balcony like a caged tiger, muttering 'Cruel luck – cruel luck'.... In short, the team were thoroughly cut up seeing victory thus snatched away.... 'The rain beat us,' said some of them." "No!" retorted the Prince of Wicketkeepers. "The sun beat us" – which was probably closer to the mark. Blackham injured himself in this match and never played Test cricket or kept wickets again.

In his 35 Tests, which included Australia's first seventeen Tests, Blackham made 800 runs at an average of 15.68 (highest score of 74), and dismissed 60 batsmen (36 caught, 24 stumped). In 45 matches for Victoria he scored 1600 runs at 22.85, with one century (109 in 1884), and dismissed 451 batsmen. However, his value as a batsman cannot be judged by averages, as he was often at his best when the game was at a critical stage. He was not a success as a captain as he worried too much when off the field. After his retirement in 1895 a
match A match is a tool for starting a fire BBQ. Fire is the rapid oxidation of a material in the exothermic chemical process of combustion, releasing heat, light, and various reaction Product (chemistry), products. Fire is hot because the co ...
for his benefit was arranged, and an annuity was bought with the proceeds. He captained Australia in eight matches, winning three. His nervous temperament meant that he worried over small setbacks, and could not bear to watch close finishes. Blackham was also a leading
Australian rules football Australian rules football, officially known as Australian football, or simply called "Aussie rules", "football Football is a family of team sport A team is a roup_(disambiguation),_group_of_individuals_(human_or_non-human)_working_...
er_for_Fitzroy_Football_Club_in_the_Victorian_Football_Association_(VFA)_during_the_1880s. Blackham_later_invested_his_earnings_from_his_tours_of_England,_without_success._A_lifelong_bachelor,_he_died_in_
,_
roup_(disambiguation),_group_of_individuals_(human_or_non-human)_working_...
er_for_Fitzroy_Football_Club_in_the_Victorian_Football_Association_(VFA)_during_the_1880s. Blackham_later_invested_his_earnings_from_his_tours_of_England,_without_success._A_lifelong_bachelor,_he_died_in_