Isabella I ( es, Isabel I; 22 April 1451 – 26 November 1504), also called Isabella the Catholic (Spanish: ''la Católica''), was Queen of Castile from 1474 until her death in 1504, as well as Queen consort of Aragon from 1479 until 1504 by virtue of her marriage to King
Ferdinand II of Aragon Ferdinand II ( an, Ferrando; ca, Ferran; eu, Errando; it, Ferdinando; la, Ferdinandus; es, Fernando; 10 March 1452 – 23 January 1516), also called Ferdinand the Catholic (Spanish: ''el Católico''), was King of Aragon and List of Sardin ...
. Reigning together over a dynastically unified
Spain , image_flag = Bandera de España.svg , image_coat = Escudo de España (mazonado).svg , national_motto = ''Plus ultra'' (Latin)(English: "Further Beyond") , national_anthem = (English: "Royal March") , i ...
, Isabella and Ferdinand are known as the Catholic Monarchs. After a struggle to claim the throne, Isabella reorganized the governmental system, brought the crime rate to the lowest it had been in years, and unburdened the kingdom of the enormous debt her half-brother King Henry IV had left behind. Isabella's marriage to Ferdinand in 1469 created the basis of the ''de facto'' unification of Spain. Her reforms and those she made with her husband had an influence that extended well beyond the borders of their united kingdoms. Isabella I of Castile and Ferdinand II of Aragon are known for being the first monarchs to be referred to as "Queen of Spain" and "King of Spain" respectively, labeled such for completing the
Reconquista The ' (Spanish language, Spanish, Portuguese language, Portuguese and Galician language, Galician for "reconquest") is a Historiography, historiographical construction describing the 781-year period in the history of the Iberian Peninsula be ...
, for issuing the Alhambra Decree which ordered the mass expulsion of Jews from Spain, for establishing the
Spanish Inquisition The Tribunal of the Holy Office of the Inquisition ( es, Tribunal del Santo Oficio de la Inquisición), commonly known as the Spanish Inquisition ( es, Inquisición española), was established in 1478 by the Catholic Monarchs of Spain, Cathol ...
, for supporting and financing
Christopher Columbus Christopher Columbus * lij, Cristoffa C(or)ombo * es, link=no, Cristóbal Colón * pt, Cristóvão Colombo * ca, Cristòfor (or ) * la, Christophorus Columbus. (; born between 25 August and 31 October 1451, died 20 May 1506) was a ...
's 1492 voyage that led to the arrival at the
New World The term ''New World'' is often used to mean the majority of Earth's Western Hemisphere, specifically the Americas."America." ''The Oxford Companion to the English Language'' (). McArthur, Tom, ed., 1992. New York: Oxford University Press, p. 3 ...
by Europeans and established the
Spanish empire The Spanish Empire ( es, link=no, Imperio español), also known as the Hispanic Monarchy ( es, link=no, Monarquía Hispánica) or the Catholic Monarchy ( es, link=no, Monarquía Católica) was a colonial empire governed by Spain and its History ...
, for making Spain a major power in Europe and much of the world, and for ushering in the Spanish Golden Age. Isabella was granted, together with her husband, the title of "Catholic monarch" by the Spanish
Pope Alexander VI Pope Alexander VI ( it, Alessandro VI, va, Alexandre VI, es, Alejandro VI; born Rodrigo de Borja; ca-valencia, Roderic Llançol i de Borja ; es, Rodrigo Lanzol y de Borja, lang ; 1431 – 18 August 1503) was head of the Catholic Churc ...
, and was recognized in 1974 as a
Servant of God "Servant of God" is a title used in the Catholic Church The Catholic Church, also known as the Roman Catholic Church, is the List of Christian denominations by number of members, largest Christian church, with 1.3 billion baptized ...
by the
Catholic Church The Catholic Church, also known as the Roman Catholic Church, is the List of Christian denominations by number of members, largest Christian church, with 1.3 billion baptized Catholics Catholic Church by country, worldwide . It is am ...
.

Isabella was born in Madrigal de las Altas Torres to John II of Castile and his second wife, Isabella of Portugal, on 22 April 1451. At the time of Isabella's birth, she was second in line to the throne after her older half-brother Henry IV of Castile. Henry was 26 at that time and married, but childless. Isabella's younger brother Alfonso of Castile was born two years later on 17 November 1453, demoting her position to third in line. When her father died in 1454, her half-brother ascended to the throne as King Henry IV of Castile. Isabella and her brother Alfonso were left in King Henry's care. Isabella, her mother, and Alfonso then moved to Arévalo. These were times of turmoil for Isabella. The living conditions at their castle in Arévalo were poor, and they suffered from a shortage of money. Although her father arranged in his will for his children to be financially well taken care of, King Henry did not comply with their father's wishes, either from a desire to keep his half-siblings restricted or from ineptitude. Even though her living conditions were difficult, Isabella was instructed in lessons of practical piety and in a deep reverence for religion under the supervision of her mother. When the King's wife, Joan of Portugal, was about to give birth to their daughter Joanna, Isabella and her brother Alfonso were summoned to court in Segovia to come under the direct supervision of the King and to finish their education. Alfonso was placed in the care of a tutor while Isabella became part of the Queen's household. 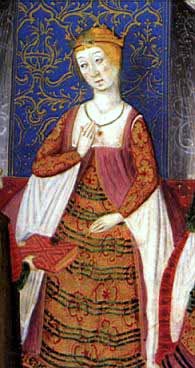 Some of Isabella's living conditions improved in Segovia. She always had food and clothing and lived in a castle that was adorned with gold and silver. Isabella's basic education consisted of reading, spelling, writing, grammar, history, mathematics, art,
chess Chess is a board game between two Player (game), players. It is sometimes called international chess or Western chess to distinguish it from chess variant, related games, such as xiangqi (Chinese chess) and shogi (Japanese chess). The current ...
, dancing, embroidery, music, and religious instruction. She and her ladies-in-waiting entertained themselves with art, embroidery, and music. She lived a relaxed lifestyle, but she rarely left Segovia since King Henry forbade this. Her half-brother was keeping her from the political turmoil going on in the kingdom, though Isabella had full knowledge of what was going on and of her role in the feuds. The noblemen, anxious for power, confronted King Henry, demanding that his younger half-brother Alfonso be named his successor. They even went so far as to ask Alfonso to seize the throne. The nobles, now in control of Alfonso and claiming that he was the true heir, clashed with King Henry's forces at the Second Battle of Olmedo in 1467. The battle was a draw. King Henry agreed to recognize Alfonso as his heir presumptive, provided that he would marry his daughter, Princess Joanna la Beltraneja. Soon after he was named Prince of Asturias, Isabella's younger brother Alfonso died in July 1468, likely of the plague. The nobles who had supported him suspected poisoning. As she had been named in her brother's will as his successor, the nobles asked Isabella to take his place as champion of the rebellion. However, support for the rebels had begun to wane, and Isabella preferred a negotiated settlement to continuing the war. She met with her elder half-brother Henry at Toros de Guisando and they reached a compromise: the war would stop, King Henry would name Isabella his heir-presumptive instead of his daughter Joanna, and Isabella would not marry without her half-brother's consent, but he would not be able to force her to marry against her will. Isabella's side came out with most of what the nobles desired, though they did not go so far as to officially depose King Henry; they were not powerful enough to do so, and Isabella did not want to jeopardize the principle of fair inherited succession, since it was upon this idea that she had based her argument for legitimacy as heir-presumptive.

The question of Isabella's marriage was not a new one. She had, at the age of six, a betrothal to Ferdinand, the younger son of John II of Navarre (whose family was a cadet branch of the House of Trastámara). At that time, the two kings, Henry and John, were eager to show their mutual love and confidence and they believed that this alliance would make their eternal friendship obvious to the world. This arrangement, however, did not last long.

Ferdinand's uncle Alfonso V of Aragon died in 1458. All of Alfonso's Spanish territories, as well as the islands of Sicily and Sardinia, were left to his brother John II. John now had a stronger position than ever before and no longer needed the security of Henry's friendship. Henry was now in need of a new alliance. He saw the chance for this much-needed new friendship in Charles of Viana, John's elder son. Charles was constantly at odds with his father, and because of this, he secretly entered into an alliance with Henry IV of Castile. A major part of the alliance was that a marriage was to be arranged between Charles and Isabella. When John II learned of this arranged marriage, he was outraged. Isabella had been intended for his favourite younger son, Ferdinand, and in his eyes, this alliance was still valid. John II had his son Charles thrown in prison on charges of plotting against his father's life. Charles died in 1461. In 1465, an attempt was made to marry Isabella to Afonso V of Portugal, Henry's brother-in-law. Through the medium of the Queen and Count of Ledesma, a Portuguese alliance was made. Isabella, however, was wary of the marriage and refused to consent. A civil war broke out in Castile over King Henry's inability to act as sovereign. Henry now needed a quick way to please the rebels of the kingdom. As part of an agreement to restore peace, Isabella was then to be betrothed to Pedro Girón Acuña Pacheco, Master of the Order of Calatrava and brother to the King's favourite, Juan Pacheco.