Indonesia ( ), officially the Republic of Indonesia ( id|Republik Indonesia|links=yes ), is a country in Southeast Asia and Oceania between the Indian and Pacific oceans. It consists of more than seventeen thousand islands, including Sumatra, Java, Sulawesi, and parts of Borneo and New Guinea. Indonesia is the world's largest island country and the 14th-largest country by land area, at . With more than 270 million people, Indonesia is the world's fourth-most populous country and the most populous Muslim-majority country. Java, the world's most populous island, is home to more than half of the country's population. The sovereign state is a presidential, constitutional republic with an elected legislature. It has 34 provinces, of which five have special status. The country's capital, Jakarta, is the second-most populous urban area in the world. The country shares land borders with Papua New Guinea, East Timor, and the eastern part of Malaysia. Other neighbouring countries include Singapore, Vietnam, the Philippines, Australia, Palau, and India's Andaman and Nicobar Islands. Despite its large population and densely populated regions, Indonesia has vast areas of wilderness that support one of the world's highest levels of biodiversity. The Indonesian archipelago has been a valuable region for trade since at least the 7th century when Srivijaya and later Majapahit traded with entities from mainland China and the Indian subcontinent. Local rulers gradually absorbed foreign influences from the early centuries and Hindu and Buddhist kingdoms flourished. Sunni traders and Sufi scholars brought Islam, while Christianity were brought mostly through European explorers. Although sometimes interrupted by the Portuguese, French and British, the Dutch were the foremost colonial power for much of their 350-year presence in the archipelago. The concept of "Indonesia" as a nation-state emerged in the early 20th century, culminating later in the proclamation of Indonesian Independence in 1945. However, it was not until 1949 that the Dutch recognised Indonesia's sovereignty following an armed and diplomatic conflict between the two. Indonesia consists of hundreds of distinct native ethnic and linguistic groups, with the largest one being the Javanese. A shared identity has developed with the motto ''"Bhinneka Tunggal Ika"'' ("Unity in Diversity" ''literally'', "many, yet one"), defined by a national language, ethnic diversity, religious pluralism within a Muslim-majority population, and a history of colonialism and rebellion against it. The economy of Indonesia is the world's 15th largest by nominal GDP and 7th by GDP at PPP. Indonesia is a regional power in Southeast Asia and is considered a middle power in global affairs. The country is a member of several multilateral organisations, including the United Nations, World Trade Organization, G20, and a founding member of the Non-Aligned Movement, Association of Southeast Asian Nations (ASEAN), East Asia Summit, and the Organisation of Islamic Cooperation.

The name ''Indonesia'' derives from Greek words of () and (), meaning "Indian islands". The name dates to the 18th century, far predating the formation of independent Indonesia. In 1850, George Windsor Earl, an English ethnologist, proposed the terms ''Indunesians''—and, his preference, ''Malayunesians''—for the inhabitants of the "Indian Archipelago or Malay Archipelago". In the same publication, one of his students, James Richardson Logan, used ''Indonesia'' as a synonym for ''Indian Archipelago''. However, Dutch academics writing in East Indies publications were reluctant to use ''Indonesia''; they preferred ''Malay Archipelago'' ( nl|Maleische Archipel); the ''Netherlands East Indies'' (), popularly ; ''the East'' (); and . After 1900, ''Indonesia'' became more common in academic circles outside the Netherlands, and native nationalist groups adopted it for political expression. Adolf Bastian of the University of Berlin popularized the name through his book . The first native scholar to use the name was Ki Hajar Dewantara when in 1913, he established a press bureau in the Netherlands, . 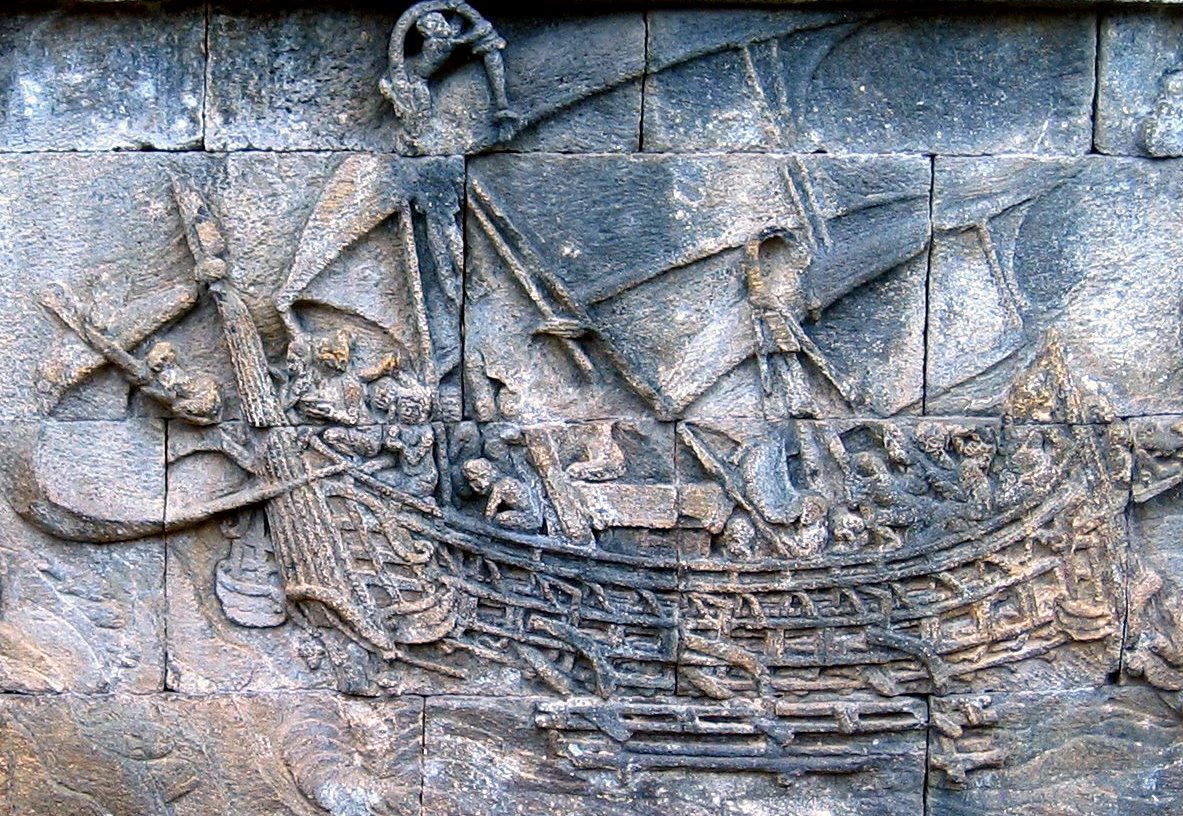 Fossilised remains of ''Homo erectus'', popularly known as the "Java Man", suggest the Indonesian archipelago was inhabited two million to 500,000 years ago. ''Homo sapiens'' reached the region around 43,000 BCE. Austronesian peoples, who form the majority of the modern population, migrated to Southeast Asia from what is now Taiwan. They arrived in the archipelago around 2,000 BCE and confined the native Melanesian peoples to the far eastern regions as they spread east. Ideal agricultural conditions and the mastering of wet-field rice cultivation as early as the eighth century BCE allowed villages, towns, and small kingdoms to flourish by the first century CE. The archipelago's strategic sea-lane position fostered inter-island and international trade, including with Indian kingdoms and Chinese dynasties, from several centuries BCE. Trade has since fundamentally shaped Indonesian history. From the seventh century CE, the Srivijaya naval kingdom flourished as a result of trade and the influences of Hinduism and Buddhism. Between the eighth and tenth centuries CE, the agricultural Buddhist Sailendra and Hindu Mataram dynasties thrived and declined in inland Java, leaving grand religious monuments such as Sailendra's Borobudur and Mataram's Prambanan. The Hindu Majapahit kingdom was founded in eastern Java in the late 13th century, and under Gajah Mada, its influence stretched over much of present-day Indonesia. This period is often referred to as a "Golden Age" in Indonesian history. The earliest evidence of Islamized populations in the archipelago dates to the 13th century in northern Sumatra. Other parts of the archipelago gradually adopted Islam, and it was the dominant religion in Java and Sumatra by the end of the 16th century. For the most part, Islam overlaid and mixed with existing cultural and religious influences, which shaped the predominant form of Islam in Indonesia, particularly in Java.

The first Europeans arrived in the archipelago in 1512, when Portuguese traders, led by Francisco Serrão, sought to monopolise the sources of nutmeg, cloves, and cubeb pepper in the Maluku Islands. Dutch and British traders followed. In 1602, the Dutch established the Dutch East India Company (VOC) and became the dominant European power for almost 200 years. The VOC was dissolved in 1800 following bankruptcy, and the Netherlands established the Dutch East Indies as a nationalised colony. For most of the colonial period, Dutch control over the archipelago was tenuous. Dutch forces were engaged continuously in quelling rebellions both on and off Java. The influence of local leaders such as Prince Diponegoro in central Java, Imam Bonjol in central Sumatra, Pattimura in Maluku, and the bloody 30-year war in Aceh weakened the Dutch and tied up the colonial military forces. Only in the early 20th century did the Dutch dominance extend to what was to become Indonesia's current boundaries. The Japanese invasion and subsequent occupation during World War II ended Dutch rule and encouraged the previously suppressed independence movement. Two days after the surrender of Japan in August 1945, Sukarno and Mohammad Hatta, influential nationalist leaders, proclaimed Indonesian independence and were appointed president and vice-president respectively. The Netherlands attempted to re-establish their rule, and a bitter armed and diplomatic struggle ended in December 1949 when the Dutch formally recognised Indonesian independence in the face of international pressure.


Minister of The State Secretary