Indira Priyadarshini Gandhi (; ''née'' Nehru; 19 November 1917 – 31 October 1984) was an Indian politician and a central figure of the Indian National Congress. She was the first and, to date, only female Prime Minister of India. Indira Gandhi was the daughter of Jawaharlal Nehru, the first prime minister of India. She served as prime minister from January 1966 to March 1977 and again from January 1980 until her assassination in October 1984, making her the second longest-serving Indian prime minister after her father. During Nehru's time as Prime Minister of India from 1947 to 1964, Gandhi was considered a key assistant and accompanied him on his numerous foreign trips. She was elected President of the Indian National Congress in 1959. Upon her father's death in 1964, she was appointed as a member of the Rajya Sabha (upper house) and became a member of Lal Bahadur Shastri's cabinet as Minister of Information and Broadcasting. In the Congress Party's parliamentary leadership election held in early 1966 (upon the death of Shastri), she defeated her rival Morarji Desai to become leader, and thus succeeded Shastri as Prime Minister of India. As prime minister, Gandhi was known for her political intransigency and unprecedented centralisation of power. She went to war with Pakistan in support of the independence movement and war of independence in East Pakistan, which resulted in an Indian victory and the creation of Bangladesh, as well as increasing India's influence to the point where it became the sole regional power of South Asia. Citing separatist tendencies, and in response to a call for revolution, Gandhi instituted a state of emergency from 1975 to 1977 where basic civil liberties were suspended and the press was censored. Widespread atrocities were carried out during the emergency. In 1980, she returned to power after free and fair elections. After Gandhi ordered military action in the Golden Temple in Operation Blue Star, her own bodyguards and Sikh nationalists assassinated her on 31 October 1984. In 1999, Indira Gandhi was named "Woman of the Millennium" in an online poll organised by the BBC. In 2020, Gandhi was named by ''Time'' magazine among the world's 100 powerful women who defined the last century.

Indira Gandhi was born Indira Nehru into a Kashmiri Pandit family on 19 November 1917 in Allahabad. Her father, Jawaharlal Nehru, was a leading figure in the movement for independence from British rule, and became the first Prime Minister of the Dominion (and later Republic) of India. She was the only child (she had a younger brother who died young), and grew up with her mother, Kamala Nehru, at the Anand Bhavan, a large family estate in Allahabad. She had a lonely and unhappy childhood. Her father was often away, directing political activities or incarcerated, while her mother was frequently bedridden with illness, and later suffered an early death from tuberculosis. She had limited contact with her father, mostly through letters.

Indira was taught mostly at home by tutors and attended school intermittently until matriculation in 1934. She was a student at the Modern School in Delhi, St Cecilia's and St Mary's Christian convent schools in Allahabad, the International School of Geneva, the Ecole Nouvelle in Bex, and the Pupils' Own School in Poona and Bombay, which is affiliated with the University of Mumbai. She and her mother Kamala moved to the Belur Math headquarters of the Ramakrishna Mission where Swami Ranganathananda was her guardian. She went on to study at the Vishwa Bharati in Santiniketan, which became Visva-Bharati University in 1951. It was during her interview that Rabindranath Tagore named her ''Priyadarshini'', literally "looking at everything with kindness" in Sanskrit, and she came to be known as Indira Priyadarshini Nehru. A year later, however, she had to leave university to attend to her ailing mother in Europe. There it was decided that Indira would continue her education at the University of Oxford. After her mother died, she attended the Badminton School for a brief period before enrolling at Somerville College in 1937 to study history. Indira had to take the entrance examination twice, having failed at her first attempt with a poor performance in Latin. At Oxford, she did well in history, political science and economics, but her grades in Latin—a compulsory subject—remained poor. Indira did, however, have an active part within the student life of the university, such as membership in the Oxford Majlis Asian Society. 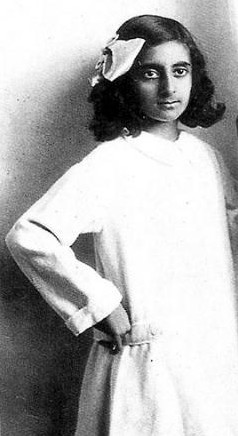 During her time in Europe, Indira was plagued with ill-health and was constantly attended to by doctors. She had to make repeated trips to Switzerland to recover, disrupting her studies. She was being treated there in 1940, when Germany rapidly conquered Europe. Indira tried to return to England through Portugal but was left stranded for nearly two months. She managed to enter England in early 1941, and from there returned to India without completing her studies at Oxford. The university later awarded her an honorary degree. In 2010, Oxford honoured her further by selecting her as one of the ten Oxasians, illustrious Asian graduates from the University of Oxford. During her stay in Britain, Indira frequently met her future husband Feroze Gandhi (no relation to Mahatma Gandhi), whom she knew from Allahabad, and who was studying at the London School of Economics. Their marriage took place in Allahabad according to Adi Dharm rituals, though Feroze belonged to a Zoroastrian Parsi family of Gujarat. The couple had two sons, Rajiv Gandhi (born 1944) and Sanjay Gandhi (born 1946). In the 1950s, Indira, now Mrs. Indira Gandhi after her marriage, served her father unofficially as a personal assistant during his tenure as the first prime minister of India. Towards the end of the 1950s, Gandhi served as the President of the Congress. In that capacity, she was instrumental in getting the Communist led Kerala State Government dismissed in 1959. That government had the distinction of being India's first-ever elected Communist Government. After her father's death in 1964 she was appointed a member of the Rajya Sabha (upper house) and served in Prime Minister Lal Bahadur Shastri's cabinet as Minister of Information and Broadcasting. In January 1966, after Shastri's death, the Congress legislative party elected her over Morarji Desai as their leader. Congress party veteran K. Kamaraj was instrumental in Gandhi achieving victory. Because she was a woman, other political leaders in India saw Gandhi as weak and hoped to use her as a puppet once elected:

Congress President Kamaraj orchestrated Mrs. Gandhi's selection as prime minister because he perceived her to be weak enough that he and the other regional party bosses could control her, and yet strong enough to beat Desai er political opponentin a party election because of the high regard for her father ... a woman would be an ideal tool for the Syndicate.

Her first eleven years serving as Prime Minister saw Gandhi evolve from the perception of Congress party leaders as their puppet, to a strong leader with the iron resolve to split the party over her policy positions, or to go to war with Pakistan to liberate Bangladesh. At the end of 1977, she was such a dominating figure in Indian politics that Congress party president D. K. Barooah had coined the phrase "India is Indira and Indira is India."

Gandhi formed her government with Morarji Desai as deputy Prime Minister and finance minister. At the beginning of her first term as prime minister, she was widely criticised by the media and the opposition as a "''Goongi goodiya''" (Hindi for a "dumb doll" or "puppet") of the Congress party bosses who had orchestrated her election and then tried to constrain her.

The first electoral test for Gandhi was the 1967 general elections for the Lok Sabha and state assemblies. The Congress Party won a reduced majority in the Lok Sabha after these elections owing to widespread disenchantment over the rising prices of commodities, unemployment, economic stagnation and a food crisis. Gandhi was elected to the Lok Sabha from the Raebareli constituency. She had a rocky start after agreeing to devalue the rupee which created hardship for Indian businesses and consumers. The importation of wheat from the United States fell through due to political disputes. For the first time, the party also lost power or lost its majority in a number of states across the country. Following the 1967 elections, Gandhi gradually began to move towards socialist policies. In 1969, she fell out with senior Congress party leaders over several issues. Chief among them was her decision to support V. V. Giri, the independent candidate rather than the official Congress party candidate Neelam Sanjiva Reddy for the vacant position of president of India. The other was the announcement by the prime minister of Bank nationalisation without consulting the finance minister, Morarji Desai. These steps culminated in party president S. Nijalingappa expelling her from the party for indiscipline. Gandhi, in turn, floated her own faction of the Congress party and managed to retain most of the Congress MPs on her side with only 65 on the side of the Congress (O) faction. The Gandhi faction, called Congress (R), lost its majority in the parliament but remained in power with the support of regional parties such as DMK. The policies of the Congress under Gandhi, before the 1971 elections, also included proposals for the abolition of the Privy Purse to former rulers of the princely states and the 1969 nationalization of the fourteen largest banks in India.

Garibi Hatao (Eradicate Poverty) was the resonant theme for Gandhi's 1971 political bid. The slogan was developed in response to the combined opposition alliance's use of the two word manifesto—"Indira Hatao" (Remove Indira).