Independence Day ( ur| ; ''Yāum-e-Āzādi''), observed annually on 14 August, is a national holiday in Pakistan. It commemorates the day when Pakistan achieved independence and was declared a sovereign state following the end of the British Raj in 1947. Pakistan came into existence as a result of the Pakistan Movement, which aimed for the creation of an independent Muslim state in the north-western regions of British India via partition. The movement was led by the All-India Muslim League under the leadership of Muhammad Ali Jinnah. The event was brought forth by the Indian Independence Act 1947 under which the British Raj gave independence to the Dominion of Pakistan which comprised West Pakistan (present-day Pakistan) and East Pakistan (now Bangladesh). In the Islamic calendar, the day of independence coincided with Ramadan 27, the eve of which, being Laylat al-Qadr, is regarded as sacred by Muslims. The main Independence Day ceremony takes place in Islamabad, where the national flag is hoisted at the Presidential and Parliament buildings. It is followed by the national anthem and live televised speeches by leaders. Usual celebratory events and festivities for the day include flag-raising ceremonies, parades, cultural events, and the playing of patriotic songs. A number of award ceremonies are often held on this day, and Pakistanis hoist the national flag atop their homes or display it prominently on their vehicles and attire. 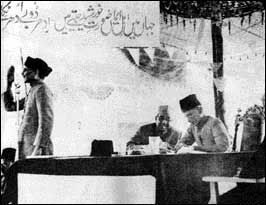 [[File:Pakistan PID Release for Independence Series 1948.jpg|150px|Cover of a press release; "Independence Anniversary Series" by the Press Information Department of Pakistan, in 1948 in relation to the country's first independence day which was celebrated on 15 August 1948.|alt=A stamp, white in the background, with Pakistan's national flag on it and "Independence Anniversary" written in bold and italic, in green colour, and "series" boldly written in black color, below the flag The area constituting Pakistan was historically a part of the [[British Raj|British Indian Empire throughout much of the nineteenth century. The [[East India Company begun their trade in [[colonial India in the 17th century, and the Company rule in India|company rule started from 1757 when they won the Battle of Plassey. Following the Indian Rebellion of 1857, the Government of India Act 1858 led to the British Crown assuming direct control over much of the Indian subcontinent. All-India Muslim League was founded by the All India Muhammadan Educational Conference at Dhaka, in 1906, in the context of the circumstances that were generated over the division of Bengal in 1905 and the party aimed at creation of a separate Muslim state. The period after World War I was marked by British reforms such as the Montagu-ford Reforms, but it also witnessed the enactment of the repressive Rowlatt Act and strident calls for self-rule by Indian activists. The widespread discontent of this period crystallized into nationwide non-violent movements of non-cooperation and civil disobedience. The idea for a separate Muslim state in the northwest regions of South Asia was introduced by Allama Iqbal in his speech as the President of the Muslim League in December 1930. Three years later, the name of "Pakistan" as a separate state was proposed in a declaration made by Chaudhary Rahmat Ali, in the form of an acronym. It was to comprise the five "northern units" of Punjab, Afghania (erstwhile North-West Frontier Province), Kashmir, Sindh, and Baluchistan. Like Iqbal, Bengal was left out of the proposal made by Rehmat Ali. In the 1940s, as the Indian independence movement intensified, an upsurge of Muslim nationalism helmed by the All-India Muslim League took place, of which Muhammad Ali Jinnah was the most prominent leader. Since a long time, feelings between Hindus and Muslims were intensifying. Being a political party to secure the interests of the Muslim diaspora in British India, the Muslim League played a decisive role during the 1940s in the Indian independence movement and developed into the driving force behind the creation of Pakistan as a Muslim state in South Asia. During a three-day general session of All-India Muslim League from 22–24 March 1940, a formal political statement was presented, known as the Lahore Resolution, which called on for the creation of an independent state for Muslims. In 1956, 23 March also became the date on which Pakistan transitioned from a dominion to a republic, and is known as Pakistan Day.

In 1946, the Labour government in Britain, exhausted by recent events such as World War II and numerous riots, realized that it had neither the mandate at home, the support internationally, nor the reliability of the British Indian Army for continuing to control an increasingly restless British India. The reliability of the native forces for continuing their control over an increasingly rebellious India diminished, and so the government decided to end the British rule of the Indian Subcontinent. In 1946, the Indian National Congress, being a secular party, demanded a single state. The All India Muslim League, who disagreed with the idea of single state, stressed the idea of a separate Pakistan as an alternative. The 1946 Cabinet Mission to India was sent to try to reach a compromise between Congress and the Muslim League, proposing a decentralized state with much power given to local governments, but it was rejected by both of the parties and resulted in a number of riots in South Asia. Eventually, in February 1947, Prime Minister Clement Attlee announced that the British government would grant full self-governance to British India by June 1948 at the latest. On 3 June 1947, the British government announced that the principle of division of British India into two independent states was accepted. The successor governments would be given dominion status and would have an implicit right to secede from the British Commonwealth. Viceroy Mountbatten chose 15 August, the second anniversary of Japan's surrender in the World War II, as the date of power transfer. He chose 14 August as the date of the ceremony of power transfer to Pakistan because he wanted to attend the ceremonies in both India and Pakistan. The Indian Independence Act 1947 (10 & 11 Geo 6 c. 30) passed by the Parliament of the United Kingdom divided British India into the two new independent dominions; the Dominion of India (later to become the Republic of India) and the Dominion of Pakistan (later to become the Islamic Republic of Pakistan). The act provided a mechanism for division of the Bengal and Punjab provinces between the two nations (see partition of India), establishment of the office of the Governor-General, conferral of complete legislative authority upon the respective Constituent Assemblies, and division of joint property between the two new countries. The act later received royal assent on 18 July 1947. The partition was accompanied by violent riots and mass casualties, and the displacement of nearly 15 million people due to religious violence across the subcontinent; millions of Muslim, Sikh and Hindu refugees trekked the newly drawn borders to Pakistan and India respectively in the months surrounding independence. On 14 August 1947, the new Dominion of Pakistan became independent and Muhammad Ali Jinnah was sworn in as its first governor general in Karachi. Independence was marked with widespread celebration, but the atmosphere remained heated given the communal riots prevalent during independence in 1947.

The date of independence

Since the transfer of power took place on the midnight of 14 and 15 August, the Indian Independence Act 1947 recognized 15 August as the birthday of both Pakistan and India. The act states; Jinnah in his first broadcast to the nation stated; The first commemorative postage stamps of the country, released in July 1948, also gave 15 August 1947 as the independence day, however in subsequent years 14 August was adopted as the independence day. This is because Mountbatten administered the independence oath to Jinnah on the 14th, before leaving for India where the oath was scheduled on the midnight of the 15th. The night of 14–15 August 1947 coincided with 27 Ramadan 1366 of the Islamic calendar, which Muslims regard as a sacred night.

The independence day is one of the six public holidays observed in Pakistan and is celebrated all across the country. To prepare and finalise the plans for independence day celebrations, meetings are held in the provincial capitals by local governments which are attended by government officials, diplomats, and politicians. Public organisations, educational institutions, and government departments organise seminars, sports competitions, and social and cultural activities leading up to the independence day. In Karachi, drives are initiated to clean and prepare the Mazar-e-Quaid (Jinnah Mausoleum) for the celebration. The official festivities take place in Islamabad and commence with the raising of the national flag on the Parliament House and the Presidency followed by a 31-gun salute in the capital and a 21-gun salute in provincial capitals. The President and Prime Minister of Pakistan address the nation in live telecasts. Government officials, political leaders and celebrities deliver messages or speeches during rallies, ceremonies and events, highlighting Pakistani achievements, goals set for the future, and praise the sacrifices and efforts of national heroes. Government buildings including the Parliament House, Supreme Court, President House and Prime Minister's Secretariat are decorated and illuminated with lights and bright colours. A change of guard takes place at national monuments by the Armed Forces. The Army, Air Force and Navy feature prominently in independence day parades. In the cities around the country, the flag hoisting ceremony is carried out by the nazim (mayor) belonging to the respective constituency, and at various public and private departments the ceremony is conducted by a senior officer of that organisation. In 2017, the Pakistan International Airlines introduced a special in-flight jam session to entertain passengers traveling on Independence Day, featuring artists singing national songs on board a domestic flight. International governments, leaders and public figures also convey their greetings on the occasion. Overseas dignitaries are invited as chief guests in ceremonies, while foreign military contingents often participate in parades. National flags are displayed on major roads and avenues such as Shahrah-e-Faisal, Shahara-e-Quaideen, and Mazar-e-Quaid Road, leading up to Jinnah's mausoleum in Karachi. Minar-e-Pakistan in Lahore, where the Pakistan Resolution was passed in 1940, is fully illuminated on the eve of the independence day to signify its importance in the creation of Pakistan.

As the month of August begins, special stalls, fun fairs and shops are set up across the country for the sale of national flags, buntings, banners and posters, badges, pictures of national heroes, multimedia and other celebratory items. Vehicles, private buildings, homes, and streets are decorated with national flags, candles, oil lamps, pennants and buntings. Businesses engage in rigorous marketing, as do leading designer fashion outlets which stock independence-themed clothing, jewellery and self-adornments. The day begins with special prayers for the integrity, solidarity, and development of Pakistan in mosques and religious places across the country.