Henan (; alternatively Honan) is a landlocked province of China, in the central part of the country. Henan is often referred to as Zhongyuan or Zhongzhou (), which literally means "central plain" or "midland", although the name is also applied to the entirety of China proper. Henan is a birthplace of Chinese civilization, with over 3,000 years of recorded history and remained China's cultural, economic and political center until approximately 1,000 years ago. Henan Province is home to many heritage sites which have been left behind, including the ruins of Shang dynasty capital city Yin and the Shaolin Temple. Four of the Eight Great Ancient Capitals of China, Luoyang, Anyang, Kaifeng and Zhengzhou, are in Henan. The practice of tai chi also began in Chen Jia Gou Village (Chen style), as did the later Yang and Wu styles. Although the name of the province () means "south of the ellowriver", approximately a quarter of the province lies north of the Yellow River, also known as the Huang He. With an area of , Henan covers a large part of the fertile and densely populated North China Plain. Its neighboring provinces are Shaanxi, Shanxi, Hebei, Shandong, Anhui, and Hubei. Henan is China's third-most populous province with a population of over 94 million. Henan is also the world's seventh-most populous subnational entity, and, if it were a country by itself, Henan would be the 14th-most populous country in the world, ahead of Egypt and Vietnam. Henan is the 5th-largest provincial economy of China and the largest among inland provinces. However, per capita GDP is low compared to other eastern and central provinces. Henan is one of the less-developed areas in China economically. The economy continues to grow based on aluminum and coal prices, as well as agriculture, heavy industry, tourism and retail. High-tech industries and service sector is underdeveloped and is concentrated around Zhengzhou and Luoyang.

Widely regarded as one of the cradles of Chinese civilization along with the Shanxi and Shaanxi provinces, Henan is known for its historical prosperity and periodic downturns. The economic prosperity resulted from its extensive fertile plains and its location at the heart of the country. However, its strategic location also means that it has suffered from nearly all of the major wars in China. In addition, the numerous floods of the Yellow River have caused significant damage from time to time. Kaifeng, in particular, has been buried by the Yellow River's silt seven times due to flooding.

Archaeological sites reveal that prehistoric cultures such as the Yangshao Culture and Longshan Culture were active in what is now northern Henan since the Neolithic Era. The more recent Erlitou culture has been controversially identified with the Xia dynasty, the first and largely legendary Chinese dynasty that was established, roughly, in the 21st century BC. Virtually the entire kingdom existed within what is now north and central Henan. The Xia dynasty collapsed around the 16th century BC following the invasion of Shang, a neighboring vassal state centered around today's Shangqiu in eastern Henan. The Shang dynasty (16th–11th centuries BC) was the first literate dynasty of China. Its many capitals are located at the modern cities of Shangqiu, Yanshi, and Zhengzhou. Their last and most important capital, Yin, located in modern Anyang, is where the first Chinese writing was created. 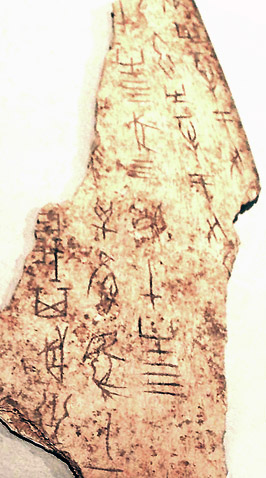 In the 11th century BC, the Zhou dynasty of Shaanxi arrived from the west and overthrew the Shang dynasty. The capital was moved to Chang'an, and the political and economical center was moved away from Henan for the first time. In 722 BC, when Chang'an was devastated by Xionites invasions, the capital was moved back east to Luoyang. This began the Spring and Autumn period, a period of warfare and rivalry. What is now Henan and all of China was divided into a variety of small, independent states, constantly at war for control of the central plain. Although regarded formally as the ruler of China, the control that Zhou king in Luoyang exerted over the feudal kingdoms had virtually disappeared. Despite the prolonged period of instability, prominent philosophers such as Confucius emerged in this era and offered their ideas on how a state should be run. Laozi, the founder of Taoism, was born in northern Chu, part of modern-day Henan. Later on, these states were replaced by seven large and powerful states during the Warring States period, and Henan was divided into three states, the Wei to the north, the Chu to the south, and the Han in the middle. In 221 BC, state of Qin forces from Shaanxi conquered all of the other six states, ending 800 years of warfare.

Ying Zheng, the leader of Qin, crowned himself (220 BCE) as the First Emperor. He abolished the feudal system and centralized all powers, establishing the Qin dynasty and unifying the core of the Han Chinese homeland for the first time. The empire quickly collapsed after the death (210 BCE) of Ying Zheng and was replaced by the Han dynasty in 206 BC, with its capital at Chang'an. Thus, a golden age of Chinese culture, economy, and military power began. The capital moved east to Luoyang in 25 AD, in response to a coup in Chang'an that created the short-lived Xin dynasty. Luoyang quickly regained control of China, and the Eastern Han dynasty (25–220) began, extending the golden age for another two centuries. The late Eastern Han dynasty saw war and rivalry between regional warlords. Xuchang in central Henan was the power base of Cao Cao, who eventually succeeded in unifying all of northern China under the Kingdom of Wei. Wei then moved its capital to Luoyang, which remained the capital after the unification of China by the Western Jin dynasty. During this period Luoyang became one of the largest and most prosperous cities in the world, despite being repeatedly damaged by warfare.

With the fall of the Western Jin dynasty in the 4th and 5th centuries, nomadic peoples from the north invaded northern China and established many successive regimes in northern China, including Henan. These people were gradually assimilated into the Chinese culture in a process known as sinification. The short-lived Sui dynasty reunified China again in 589 with its capital back in Chang'an. It collapsed due to Sui Emperor Yang's costly attempt to relocate the capital from Chang'an to Luoyang and the construction of many extravagant palaces there. The succeeding Tang dynasty (618–907) kept its capital in Chang'an, marking the beginning of China's second golden age, with Henan being one of the wealthiest places in the empire. The Tang dynasty lasted for three centuries before it eventually succumbed to internal strife. In the Period of Five Dynasties and Ten Kingdoms (907–960) that followed, Kaifeng in eastern Henan became the capital of four dynasties. The Song dynasty that reunified China in 982 also had its capital at Kaifeng. Under Song rule, China entered another era of culture and prosperity, and Kaifeng overtook Luoyang and Chang'an as the largest city in China and in the world. In 1127, however, the Song dynasty succumbed to Jurchen (Jin dynasty) invaders from the north in the Jin–Song war, and in 1142 ceded all of northern China, including Henan. The Song government moved its capital to Hangzhou in Southern China, which, under the Southern Song dynasty (1127–1279) continued to enjoy relative economic and culture prosperity. A prolonged period of peace and cultural and economic prosperity in the Yangtze River delta ''Jiangnan'' region (modern southern Jiangsu, northern Zhejiang, and Shanghai) made this the new center of Chinese culture and economy. Kaifeng served as the Jurchen's "southern capital" from 1157 (other sources say 1161) and was reconstructed during this time. But the Jurchen kept their main capital further north, until 1214, when they were forced to move the imperial court southwards to Kaifeng in order to flee the Mongol onslaught. In 1234 they succumbed to combined Mongol and Song dynasty forces. Mongols took control, and in 1279 they conquered all of China, establishing the Yuan dynasty and set up the equivalent of modern Henan province, with borders very similar to the modern ones. Neither its territories nor its role in the economy changed under later dynasties. Henan remained important in the Ming dynasty (1368–1644) and Qing dynasty (1644–1911) that followed, though its economy slowly deteriorated due to frequent natural disasters.

The Qing dynasty was overthrown by the 1911 Revolution and then the Republic of China was established in 1912, during which a man from Henan, Yuan Shikai, played an important role and thus he became the first president of Republic of China. The construction and extension of the Pinghan Railway and Longhai Railway had turned Zhengzhou, a minor county town at the time, into a major transportation hub. Despite the rise of Zhengzhou, Henan's overall economy repeatedly stumbled as it was the hardest hit by the many disasters that struck China in its modern era. Henan suffered greatly during the Second Sino-Japanese War. In 1938, when the Imperial Japanese Army captured Kaifeng, the government led by Chiang Kai-shek bombed the Huayuankou dam in Zhengzhou in order to prevent Japanese forces from advancing further. However, this caused massive flooding in Henan, Anhui, and Jiangsu resulting in hundreds of thousands of deaths. In 1942 Henan was hit by a great famine resulting from a mix of drought, locusts and destruction caused by the war. Grain requisition policies were continued by Chinese and Japanese authorities despite the shortage of food, making the death toll far greater than it might have been otherwise. In 1954, the new government of the People's Republic of China moved the capital of Henan from Kaifeng to Zhengzhou, as a result of its economic importance. The PRC had earlier established a short-lived Pingyuan Province consisting of what is now northern Henan and western Shandong with Xinxiang as its capital. This province was abolished in 1952. In 1958, Yashan in Suiping County, Henan, became the first people's commune of China, heralding the beginning of the "Great Leap Forward". In the subsequent famines of the early 1960s popularly attributed to the Great Leap Forward, Henan was one of the hardest hit and millions of lives were lost. Suffering under famine and economic chaos caused by the Great Leap, locals in Henan offered low-level resistance mostly through banditry. In 1959, however, a full peasant uprising erupted and was only defeated after twenty days of fighting. A destructive flooding of the Huai River in the summer of 1950 prompted large-scale construction of dams on its tributaries in central and southern Henan. Unfortunately, many of the dams were not able to withstand the extraordinarily high levels of rainfall caused by Typhoon Nina in August 1975. Sixty-two dams, the largest of which was the Banqiao Dam in Biyang County collapsed; catastrophic flooding, spread over several counties throughout Zhumadian Prefecture and further downstream, killed at least 26,000 people. Unofficial human life loss estimates, including deaths from the ensuing epidemics and famine, range as high as 85,600,