Georgia () is a state in the Southeastern region of the United States, bordered to the north by Tennessee and North Carolina; to the northeast by South Carolina; to the southeast by the Atlantic Ocean; to the south by Florida; and to the west by Alabama. Georgia is the 24th-largest in area and 8th-most populous of the 50 United States. Its 2019 estimated population was 10,617,423, according to the U.S. Census Bureau. Atlanta, a "beta(+)" global city, is both the state's capital and its largest city. The Atlanta metropolitan area, with an estimated population of more than 6 million people in 2019, is the 9th most populous metropolitan area in the United States and contains about 57% of Georgia's entire population. Founded in 1733 as a British colony, Georgia was the last and southernmost of the original Thirteen Colonies to be established. Named after King George II of Great Britain, the Colony of Georgia covered the area from South Carolina south to Spanish Florida and west to French Louisiana at the Mississippi River. On January 2, 1788, Georgia became the fourth state to ratify the United States Constitution. From 1802 to 1804, western Georgia was split to form the Mississippi Territory, which later was admitted as the U.S. states of Alabama and Mississippi. Georgia declared its secession from the Union on January 19, 1861, and was one of the original seven Confederate States. Following the Civil War, it was the last state to be restored to the Union, on July 15, 1870. In the post-Reconstruction era, Georgia's economy was transformed as a group of prominent politicians, businessmen, and journalists, led by Henry W. Grady, espoused the "New South" philosophy of sectional reconciliation, industrialization, and white supremacy. During the 20th century, several Georgians, most notably Martin Luther King Jr., were prominent leaders during the civil rights movement. Since 1945, Georgia has seen substantial population growth as part of the broader Sun Belt phenomenon. From 2007 to 2008, 14 of Georgia's counties ranked among the nation's 100 fastest-growing. Georgia is defined by a diversity of landscapes, flora, and fauna. The state's northernmost regions include the Blue Ridge Mountains, part of the larger Appalachian Mountain system. The Piedmont plateau extends from the foothills of the Blue Ridge south to the Fall Line, an escarpment to the coastal plain defining the state's southern region. Georgia's highest point is Brasstown Bald at 4,784 feet (1,458 m) above sea level; the lowest is the Atlantic Ocean. With the exception of some high-altitude areas in the Blue Ridge, the entirety of the state has a humid subtropical climate. Of the states entirely east of the Mississippi River, Georgia is the largest in land area.

Before settlement by Europeans, Georgia was inhabited by the mound building cultures. The British colony of Georgia was founded by James Oglethorpe on February 12, 1733. The colony was administered by the Trustees for the Establishment of the Colony of Georgia in America under a charter issued by (and named for) King George II. The Trustees implemented an elaborate plan for the colony's settlement, known as the Oglethorpe Plan, which envisioned an agrarian society of yeoman farmers and prohibited slavery. The colony was invaded by the Spanish in 1742, during the War of Jenkins' Ear. In 1752, after the government failed to renew subsidies that had helped support the colony, the Trustees turned over control to the crown. Georgia became a crown colony, with a governor appointed by the king. The Province of Georgia was one of the Thirteen Colonies that revolted against British rule in the American Revolution by signing the 1776 Declaration of Independence. The State of Georgia's first constitution was ratified in February 1777. Georgia was the 10th state to ratify the Articles of Confederation on July 24, 1778, and was the 4th state to ratify the United States Constitution on January 2, 1788. After the Creek War (1813–1814), General Andrew Jackson forced the Muscogee (Creek) tribes to surrender land to the state of Georgia, including in the Treaty of Fort Jackson (1814), surrendering 21 million acres in what is now southern Georgia and central Alabama, and the Treaty of Indian Springs (1825). In 1829, gold was discovered in the North Georgia mountains leading to the Georgia Gold Rush and establishment of a federal mint in Dahlonega, which continued in operation until 1861. The resulting influx of white settlers put pressure on the government to take land from the Cherokee Nation. In 1830, President Andrew Jackson signed the Indian Removal Act, sending many eastern Native American nations to reservations in present-day Oklahoma, including all of Georgia's tribes. Despite the Supreme Court's ruling in ''Worcester v. Georgia'' (1832) that U.S. states were not permitted to redraw Indian boundaries, President Jackson and the state of Georgia ignored the ruling. In 1838, his successor, Martin Van Buren, dispatched federal troops to gather the tribes and deport them west of the Mississippi. This forced relocation, known as the Trail of Tears, led to the death of more than four thousand Cherokees. 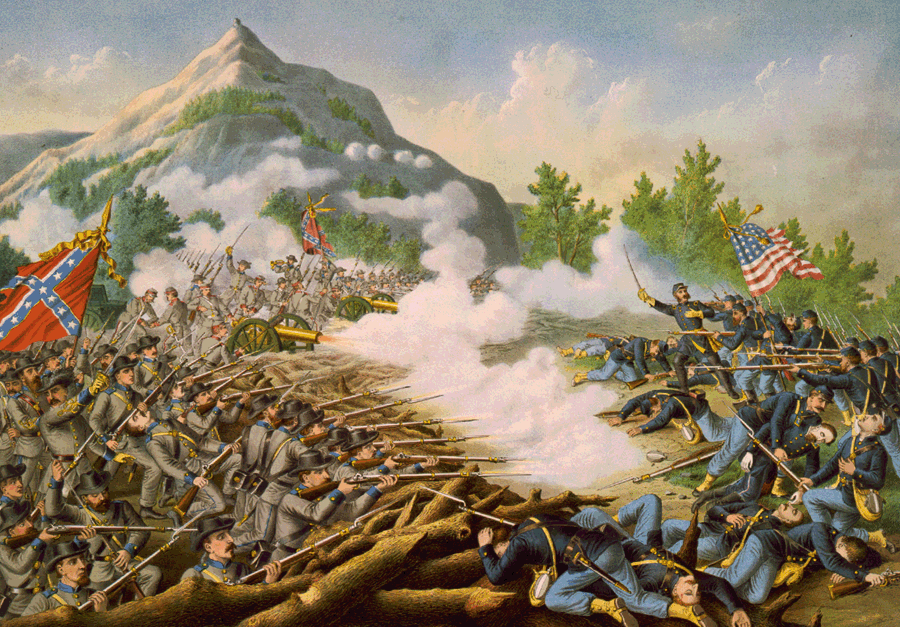 In early 1861, Georgia joined the Confederacy (with secessionists having a slight majority of delegates) and became a major theater of the Civil War. Major battles took place at Chickamauga, Kennesaw Mountain, and Atlanta. In December 1864, a large swath of the state from Atlanta to Savannah was destroyed during General William Tecumseh Sherman's March to the Sea. 18,253 Georgian soldiers died in service, roughly one of every five who served. In 1870, following the Reconstruction Era, Georgia became the last Confederate state to be restored to the Union. With white Democrats having regained power in the state legislature, they passed a poll tax in 1877, which disenfranchised many poor blacks and whites, preventing them from registering. In 1908, the state established a white primary; with the only competitive contests within the Democratic Party, it was another way to exclude blacks from politics. They constituted 46.7% of the state's population in 1900, but the proportion of Georgia's population that was African American dropped thereafter to 28%, primarily due to tens of thousands leaving the state during the Great Migration. According to the Equal Justice Institute's 2015 report on lynching in the United States (1877–1950), Georgia had 531 deaths, the second-highest total of these extralegal executions of any state in the South. The overwhelming number of victims were black and male. Political disfranchisement persisted through the mid-1960s, until after Congress passed the Voting Rights Act of 1965. 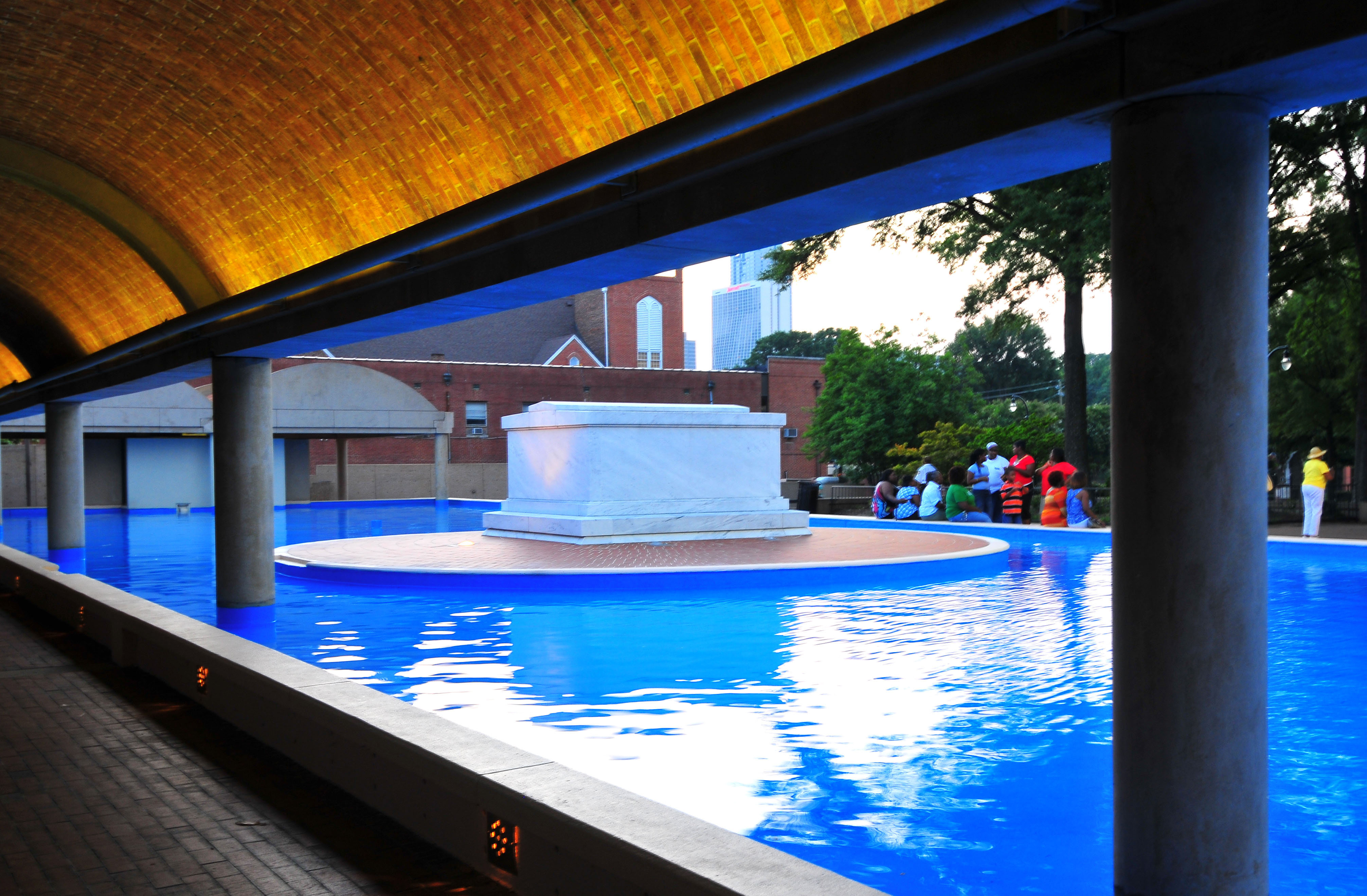 An Atlanta-born Baptist minister who was part of the educated middle class that had developed in Atlanta's African-American community, Martin Luther King Jr., emerged as a national leader in the civil rights movement. King joined with others to form the Southern Christian Leadership Conference (SCLC) in Atlanta in 1957 to provide political leadership for the Civil Rights Movement across the South. On February 5, 1958, during a training mission flown by a B-47, a Mark 15 nuclear bomb, also known as the Tybee Bomb, was lost off the coast of Tybee Island near Savannah. The bomb was thought by the Department of Energy to lie buried in silt at the bottom of Wassaw Sound. By the 1960s, the proportion of African Americans in Georgia had declined to 28% of the state's population, after waves of migration to the North and some in-migration by whites. With their voting power diminished, it took some years for African Americans to win a state-wide office. Julian Bond, a noted civil rights leader, was elected to the state House in 1965, and served multiple terms there and in the state senate. Atlanta Mayor Ivan Allen, Jr. testified before Congress in support of the Civil Rights Act, and Governor Carl Sanders worked with the Kennedy administration to ensure the state's compliance. Ralph McGill, editor and syndicated columnist at the ''Atlanta Constitution'', earned admiration by writing in support of the Civil Rights Movement. In 1970, newly elected Governor Jimmy Carter declared in his inaugural address that the era of racial segregation had ended. In 1972, Georgians elected Andrew Young to Congress as the first African American Congressman since the Reconstruction era. In 1980, construction was completed on an expansion of what is now named Hartsfield–Jackson Atlanta International Airport (ATL). The busiest and most efficient airport in the world, it accommodates more than a hundred million passengers annually. Employing more than 60,000 people, the airport became a major engine for economic growth.