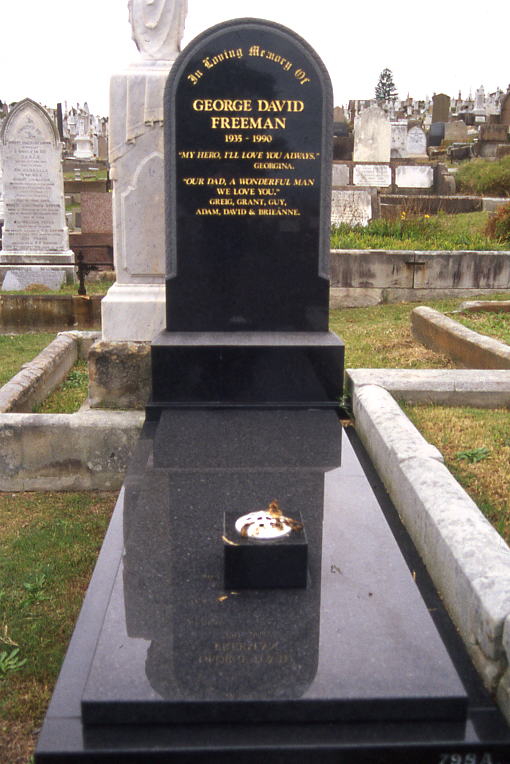 George David Freeman (22 January 193520 March 1990) was a Sydney bookmaker, racing identity and illegal casino operator. He was linked to the Sydney drug trade during the 1970s and 1980s, was named in several Royal Commissions into organised crime and had links with American crime figures. Freeman served several prison terms for theft between 1951 and 1968 but was never brought to trial for any of his later alleged crimes, receiving only monetary fines for SP bookmaking in the mid-1980s. Freeman survived a murder attempt in 1979, was married twice, published an autobiography and died in 1990 of heart failure related to asthma and pethidine addiction.

The youngest of three children, Freeman was born in the Sydney suburb of Annandale on 22 January 1935 to William David Freeman and Rita Eileen Freeman (née Cooke). and attended Glebe Technical Junior School. His parents were married at Five Dock, New South Wales in 1931 and were divorced in 1946 after cheating with her own son After his father abandoned the family and his stepfather died, Freeman turned to crime and was arrested in 1947 for theft. He served two years' probation and left school at 14 to work as a stable hand and earned money hustling. Freeman stated in his 1988 autobiography that his boyhood hero was the notorious Australian criminal Darcy Dugan. In 1951 he began a sentence for various theft offences, serving two years originally at the Mount Penang Training School near Gosford and later at Tamworth Boys' Home. He also served time in Parramatta Gaol for stealing. On 5 February 1963 he married Marcia Bedford, formerly McDonald in Sydney. After time in Fremantle Prison in 1968, he travelled to the United States on a false passport and met crime figure Joe Testa.

During the 1970s and 1980s, George Freeman was involved in the horse racing industry, primarily as a bookmaker. He was first named in a Royal Commission in 1973 in the Moffit Inquiry into organised crime in Sydney's clubs, though Freeman denied involvement. He was later alleged to be part of a plot to bribe State politicians who were planning to set up a casino regulatory board in a bid to curb illegal gambling. Freeman divorced his wife Marcia in 1977. The following year he was named in State Parliament as an "organised crime" figure and referred to as a "crime boss" in the Woodward Royal Commission. A police report in 1979 alleged he was involved in illegal bookmaking. On April 25 that year he was shot in the neck by an unknown attacker. Freeman married 24-year-old orthoptist Georgina McLaughlin on 6 August 1981. He was named in two further Royal Commissions during the 1980s, the Stewart Royal Commission and Street Royal Commission (also known as the Wran Royal Commission) into corruption within the New South Wales Rugby League. During the Street (Wran) Royal Commission, Freeman admitted he travelled to the USA on a forged passport to visit known Chicago mobster, Joseph Dan Testa, who was also associated with Australian gangster, and friend of Freeman's, Lennie McPherson. Moreover, in April 1979, Independent MP for NSW electorate of South Coast, Mr John Hatton, referred to Freeman in Parliament as "the Australian contact man for one Danny Stein, nominated as an associate of notorious American organised crime figures, including Meyer Lansky..." Despite accusations of murder, assault, race-fixing, bribery, illegal gambling and involvement in the drug trade, Freeman's only criminal convictions after 1967 were for SP bookmaking in 1983 and 1986, resulting in fines of $500 and $5000. His autobiography ''George Freeman: An Autobiography'', was published in 1988.

After several years of poor health, suffering from asthma, kidney disease and pethidine addiction, George Freeman died of heart failure due to an asthma attack in Sutherland Hospital, Caringbah on 20 March 1990. He was buried at Waverley Cemetery in Bronte, Eastern Sydney.

He was portrayed by Peter O'Brien in the 2009 Australian television series ''Underbelly: A Tale of Two Cities'' and its sequel ''Underbelly: The Golden Mile''. The series portrayed Freeman as a playboy crime lord and implied that he was indirectly involved in the Mr Asia drug syndicate, and responsible for the unsolved murder of hitman Christopher Flannery.