General (abbreviated GEN) is the second-highest rank, and the highest active rank, of the
Australian Army The Australian Army is the military land force of Australia. Formed in 1901, as the Commonwealth Military Forces, through the amalgamation of the Colonial forces of Australia, Australian colonial forces following Federation of Australia, federat ...
and was created as a direct equivalent of the British military rank of general; it is also considered a
four-star rank A four-star rank is the rank of any four-star officer described by the NATO OF-9 code. Four-star officers are often the most senior commanders in the armed services, having ranks such as (full) admiral Admiral is one of the highest ranks in ...
. Prior to 1958, Australian generals (and field marshals) were only appointed in
exceptional circumstances Exceptional circumstances or exceptional situations are the conditions required to grant additional powers to a government agency A government or state agency, sometimes an appointed commission, is a permanent or semi-permanent organization in th ...
. In 1958, the position which is currently called Chief of the Defence Force was created, and since 1966, the rank of general has been held when an army officer is appointed to that position. General is a higher rank than
lieutenant general Lieutenant general (Lt Gen, LTG and similar) is a three-star rank, three-star military rank (NATO code OF-8) used in many countries. The rank traces its origins to the Middle Ages, where the title of lieutenant general was held by the second-in ...
, but is lower than field marshal. General is the equivalent of
admiral Admiral is one of the highest ranks in some navy, navies, and in many navies is the highest rank. In the Commonwealth of Nations, Commonwealth nations and the United States, a "full" admiral is equivalent to a "full" general officer, general in ...
in the
Royal Australian Navy The Royal Australian Navy (RAN) is the principal naval force A navy, naval force, or maritime force is the branch of a Nation's armed forces principally designated for naval warfare, naval and amphibious warfare; namely, lake-borne, riveri ...
and air chief marshal in the
Royal Australian Air Force "Through Adversity to the Stars" , colours = , colours_label = , march = Royal Australian Air Force March Past (Eagles of Australia) , mascot = , anni ...
. A general's insignia is
St Edward's Crown St Edward's Crown is the centrepiece of the Crown Jewels of the United Kingdom The Crown Jewels of the United Kingdom, originally the Crown Jewels of England, are a collection of royal ceremonial objects kept in the Tower of London The ... 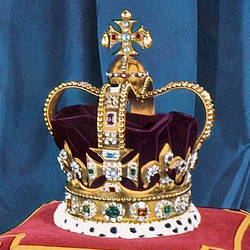 (or 'pip') above a crossed sword and baton, with the word 'Australia' at the bottom.