Click Here for Items Related To - Frenulum of tongue


The frenulum of tongue or tongue web (also lingual frenulum or frenulum linguæ; also fraenulum) is a small fold of mucous membrane extending from the floor of the mouth to the midline of the underside of the tongue.

The tongue starts to develop at about four weeks. The tongue originates from the first, second, and third pharyngeal arches which induces the migration of muscles from the occipital myotomes. A U-shaped sulcus develops in front of and on both sides of the oral part of the tongue. This allows the tongue to be free and highly mobile, except at the region of the lingual frenulum, where it remains attached. Disturbances during this stage cause tongue tie or ankyloglossia. During the sixth week of gestation, the medial nasal processes approach each other to form a single globular process that in time gives rise to the nasal tip, columella, prolabium, frenulum of the upper lip, and the primary palate. As the tongue continues to develop, frenulum cells undergo apoptosis, retracting away from the tip of the tongue, and increasing the tongue's mobility. During early gestation (as early as four weeks) the lingual frenulum serves as a guide for the forward growth of the tongue. After birth the tip of the tongue continues to elongate, giving the impression of the frenulum retracting, though in reality this has been going on for some time before birth. This is what gives the impression that the frenulums of some previously tongue-tied infants will "stretch" with age and growth. In reality the tongue often just grows beyond the frenulum, although some do also stretch and/or rupture after mild accidents. Many others continue to cause problems throughout life, unless corrected.

The thin strip of tissue that runs vertically from the floor of the mouth to the undersurface of the tongue is called the lingual frenulum. It tends to limit the movement of the tongue, and in some people, it is so short that it actually interferes with speaking. The base of the frenulum contains a "V" shaped hump of tissue in the floor of the mouth which houses a series of saliva gland ducts. The two largest ducts are in the center just in front of the attachment of the lingual frenulum and are called Wharton's Ducts. They empty the submandibular (submaxillary) and sublingual salivary glands into a small prominence on either side of the frenulum, the ''sublingual caruncle''. These ducts can be quite active in some persons, and upon occasion, a considerable amount of saliva may erupt from them while talking, eating, yawning, or cleaning the teeth in a process known as gleeking. The sublingual saliva glands empty through a series of tiny ducts in the tissue on either side of Wharton's ducts. The tongue is attached to the floor of the oral cavity by the frenulum. 270px|Sketch of an open mouth showing the frenulum & surrounding structures Superficial veins run through the base of the frenulum known as varicosities. Their presence is normal, becoming more and more prominent as one ages. 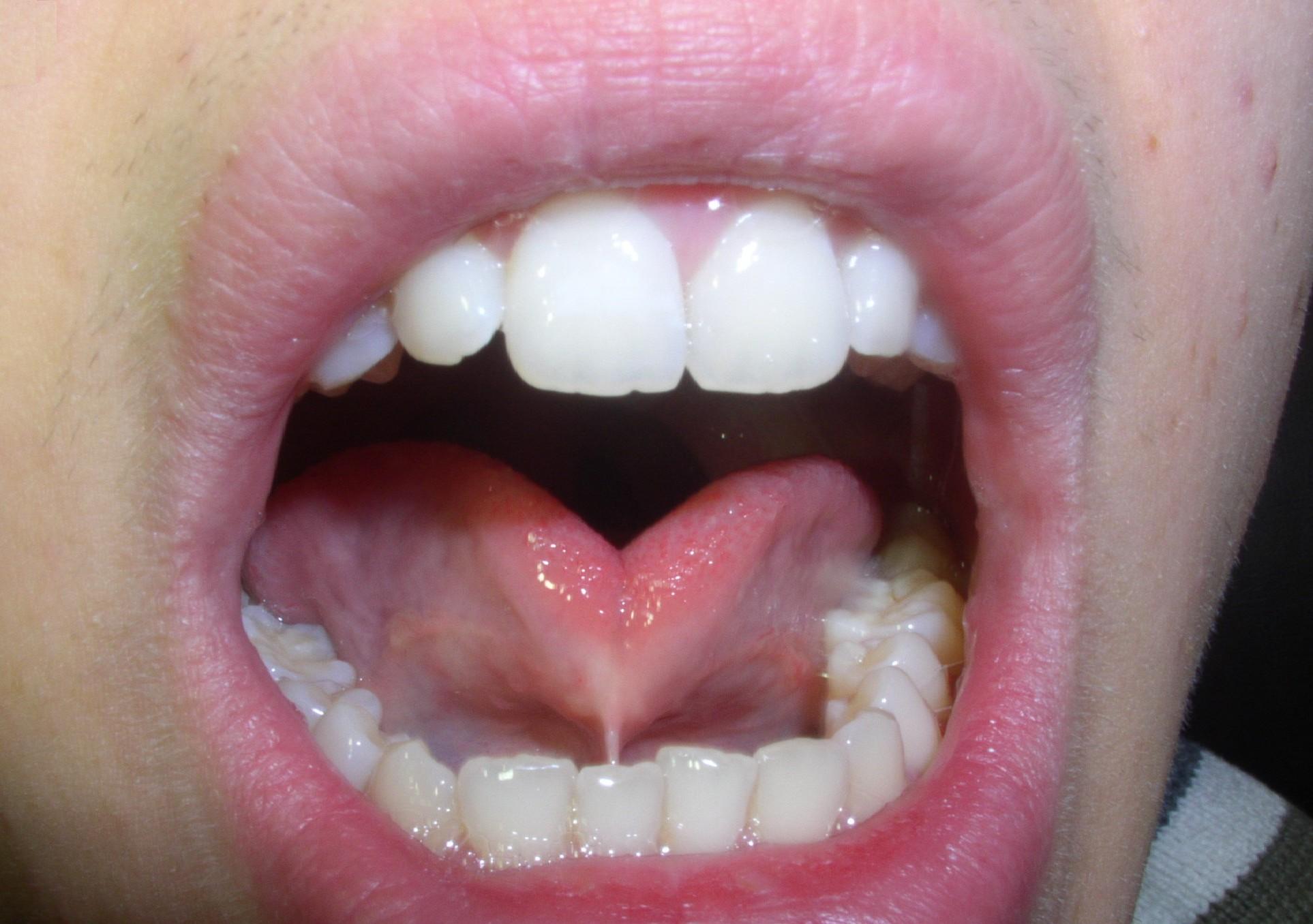 Ankyloglossia, also known as tongue-tie, is a congenital anomaly characterised by an abnormally short lingual frenulum; when severe, the tip of the tongue cannot be protruded beyond the lower incisor teeth. Additionally, an abnormally short frenulum in infants can be a cause of breastfeeding problems, including sore and damaged nipples and inadequate feedings. The resultant trouble breastfeeding results in slower weight gain in affected infants. The absence of the inferior labial (100% sensitivity; 99.4% specificity) and lingual frenulum (71.4% sensitivity; 100% specificity) was found to be associated with classical and hypermobility types of Ehlers-Danlos syndrome.