The "Four Policemen" was a postwar council with the Big Four that US President Franklin Roosevelt proposed as a guarantor of world peace. Their members were called the Four Powers during
World War II World War II or the Second World War, often abbreviated as WWII or WW2, was a world war that lasted from 1939 to 1945. It involved the World War II by country, vast majority of the world's countries—including all of the great power ...
and were the four major Allies of World War II: the
United Kingdom The United Kingdom of Great Britain and Northern Ireland, commonly known as the United Kingdom (UK) or Britain, is a country in Europe, off the north-western coast of the European mainland, continental mainland. It comprises England, Scotlan ...
, the
United States The United States of America (U.S.A. or USA), commonly known as the United States (U.S. or US) or America, is a country Continental United States, primarily located in North America. It consists of 50 U.S. state, states, a Washington, D.C., ...
, the
Soviet Union The Soviet Union,. officially the Union of Soviet Socialist Republics. (USSR),. was a List of former transcontinental countries#Since 1700, transcontinental country that spanned much of Eurasia from 1922 to 1991. A flagship communist state, ...
, and
China China, officially the People's Republic of China (PRC), is a country in East Asia. It is the world's List of countries and dependencies by population, most populous country, with a Population of China, population exceeding 1.4 billion, slig ...
. Roosevelt repeatedly used the term "Four Policemen" starting in 1942. The Four Policemen would be responsible for keeping order within their spheres of influence: Britain in its empire and Western Europe, the Soviet Union in Eastern Europe and the central Eurasian landmass, China in East Asia and the Western Pacific; and the United States in the Western Hemisphere. As a preventive measure against new wars, countries other than the Four Policemen were to be disarmed. Only the Four Policemen would be allowed to possess any weapons more powerful than a rifle. Initially, Roosevelt envisioned the new postwar international organization would be formed several years after the war. Later, he came to view creating the United Nations as the most important goal for the entire war effort. His vision for the organization consisted of three branches: an executive branch with the Big Four, an enforcement branch composed of the same four great powers acting as the Four Policemen or Four Sheriffs, and an international assembly representing other nations. As a compromise with internationalist critics, the Big Four nations became the permanent members of the
UN Security Council The United Nations Security Council (UNSC) is one of the Organs of the United Nations, six principal organs of the United Nations (UN) and is charged with ensuring international security, international peace and security, recommending the admi ...
, with significantly less power than had been envisioned in the Four Policemen proposal. When the United Nations was officially established later in 1945,
France France (), officially the French Republic ( ), is a country primarily located in Western Europe. It also comprises of Overseas France, overseas regions and territories in the Americas and the Atlantic Ocean, Atlantic, Pacific Ocean, Pac ...
was in due course added as the fifth permanent member of the Security Council because of the insistence of Churchill.

After
World War I World War I (28 July 1914 11 November 1918), often abbreviated as WWI, was List of wars and anthropogenic disasters by death toll, one of the deadliest global conflicts in history. Belligerents included much of Europe, the Russian Empire, ...
, the United States pursued a policy of isolationism and declined to join the League of Nations in 1919. Roosevelt had been a supporter of the League of Nations but, by 1935, he told his foreign policy adviser Sumner Welles: "The League of Nations has become nothing more than a debating society, and a poor one at that!". Roosevelt criticized the League for representing the interests of too many nations. He came to favor an approach to global peace secured through the unified efforts of the world's great powers, rather than through the Wilsonian notions of international consensus and collaboration that guided the League of Nations. The idea that great powers should "police" the world had been discussed by President Roosevelt as early as August 1941, during his first meeting with British Prime Minister Winston Churchill. When the Atlantic Charter was issued, Roosevelt had ensured that the charter omitted mentioning any American commitment towards the establishment of a new international body after the war. He was reluctant to publicly announce his plans for creating a postwar international body, aware of the risk that the American people might reject his proposals, and he did not want to repeat Woodrow Wilson's struggle to convince the Senate to approve American membership in the League of Nations. Roosevelt's proposal was to create a new international body led by a "trusteeship" of great powers that would oversee smaller countries. In September 1941, he wrote: Despite a "desultory" first effort, the U.S. State Department's postwar planning had been in abeyance for most of 1940 and 1941. Following the Atlantic Conference, a directive on postwar planning was prepared by the State Department by mid-October, which was delivered to the President in late December.

Plans for the Four Policemen 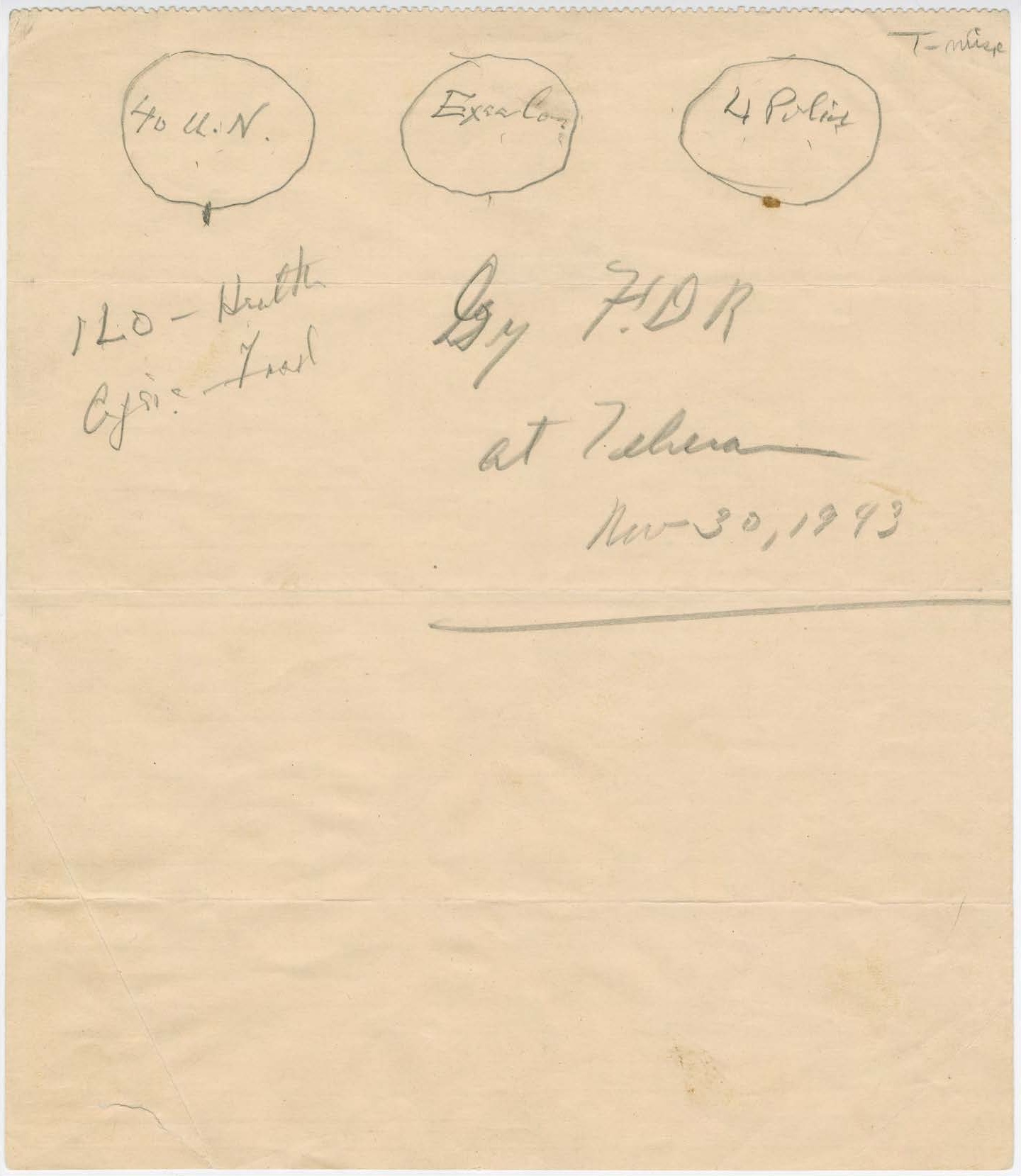 The Japanese attack on Pearl Harbor in December 1941 led to a change in Roosevelt's position. He transformed his trusteeship proposal into a proposal for Four Policementhe United States, Britain, the Soviet Union, and Chinato enforce the peace after the war for several years while other nations, friend and foe, would be disarmed. Roosevelt made his first references to the Four Policemen proposal in early 1942. This would not preclude the eventual formation of a worldwide organisation of nations "for the purpose of full discussion" provided "management" was left to the Four Policemen. He presented his postwar plans to Soviet foreign minister Vyacheslav Molotov, who had arrived in Washington on May 29 to discuss the possibility of launching a second front in Europe. The President said to Molotov that "he could not visualize another League of Nations with 100 different signatories; there were simply too many nations to satisfy, hence it was a failure and would be a failure". Roosevelt told Molotov that the Big Four must unite after the war to police the world and disarm aggressor states. When Molotov asked about the role of other countries, Roosevelt answered by opining that too many "policemen" could lead to infighting, but he was open to the idea of allowing other allied countries to participate. A memorandum of the conference summarizes their conversation: Roosevelt and Molotov continued their discussion of the Four Policemen in a second meeting on June 1. Molotov informed the President that Stalin was willing to support Roosevelt's plans for maintaining postwar peace through the Four Policemen and enforced disarmament. Roosevelt also raised the issue of postwar decolonization. He suggested that former colonies should undergo a period of transition under the governance of an international trusteeship prior to their independence. China was brought in as a member of the Big Four and a future member of the Four Policemen. Roosevelt was in favor of recognizing China as a great power because he was certain that the Chinese would side with the Americans against the Soviets. He said to British Foreign Secretary Anthony Eden, "In any serious conflict of policy with Russia, hinawould undoubtedly line up on our side." As it was before the
Chinese Civil War The Chinese Civil War was fought between the Kuomintang-led government of the Republic of China and forces of the Chinese Communist Party, continuing intermittently since 1 August 1927 until 7 December 1949 with a Communist victory on m ...
ensued, he did not mean the Communist China, but the
Republic of China Taiwan, officially the Republic of China (ROC), is a Country, country in East Asia, at the junction of the East China Sea, East and South China Seas in the northwestern Pacific Ocean, with the China, People's Republic of China (PRC) to the n ...
. The President believed that a pro-American China would be useful for the United States should the Americans, Soviets, and Chinese agree to jointly occupy Japan and Korea after the war. When Molotov voiced concerns about the stability of China, Roosevelt responded by saying that the combined "population of our nations and friends was well over a billion people". Churchill objected to Roosevelt's inclusion of China as one of the Big Four because he feared that the Americans were trying to undermine Britain's colonial holdings in Asia. In October 1942, Churchill told Eden that Republican China represented a " faggot vote on the side of the United States in any attempt to liquidate the British overseas empire." Eden shared this view with Churchill and expressed skepticism that China, which was then in the midst of a civil war, could ever return to a stable nation. Roosevelt responded to Churchill's criticism by telling Eden that "China might become a very useful power in the Far East to help police Japan" and that he was fully supportive of offering more aid to China.

Formation of the United Nations

On New Year's Day 1942, the representatives of Allied "Big Four", the United States, the United Kingdom, the Soviet Union, and China, signed a short document which later came to be known as the Declaration by United Nations and the next day the representatives of twenty-two other nations added their signatures. President Roosevelt initiated post-war plans for the creation of a new and more durable international organization that would replace the former League of Nations. Roosevelt's Four Policemen proposal received criticism from liberal internationalists who wanted power to be more evenly distributed among nations. Internationalists were concerned that the Four Policemen could lead to a new Quadruple Alliance. A new plan for the United Nations was drafted by the State Department in April 1944. It kept the emphasis on great power solidarity that was central to Roosevelt's Four Policemen proposal for the United Nations. The members of the Big Four would serve as permanent members of the United Nations Security Council. Each of the four permanent members would be given a United Nations Security Council veto power, which would override any UN resolution that went against the interests of one of the Big Four. However, the State Department had compromised with the liberal internationalists. Membership eligibility was widened to include all nation states fighting against the Axis powers instead of a select few. Roosevelt had been a supporter of the League of Nations back in 1919–20, but was determined to avoid the mistakes Woodrow Wilson had made. The United Nations was FDR's highest postwar priority. He insisted on full coordination with the Republican leadership. He made sure that leading Republicans were on board, especially Senators Arthur Vandenberg of Michigan, and Warren Austin of Vermont. In a broad sense, Roosevelt believed that the UN could solve the minor problems and provide the chief mechanism to resolve any major issues that arose among the great powers, all of whom would have a veto. Roosevelt was especially interested in international protection of human rights, and in this area his wife played a major role as well. The Dumbarton Oaks Conference convened in August 1944 to discuss plans for the postwar United Nations with delegations from the United States, the United Kingdom, the Soviet Union, and China. US President Franklin D. Roosevelt considered his most important legacy the creation of the United Nations, making a permanent organization out of the wartime Alliance of the same name. He was the chief promoter of the United Nations idea. The Big Four were the only four sponsoring countries of the San Francisco Conference of 1945 and their heads of the delegations took turns as chairman of the plenary meetings. During this conference, the Big Four and their allies signed the Charter of the United Nations.

In the words of a former Undersecretary General of the UN, Sir Brian Urquhart: