The Federal Trade Commission (FTC) is an independent agency of the United States government whose principal mission is the enforcement of civil (non-criminal) U.S. antitrust law and the promotion of consumer protection. The Commission is headed by five Commissioners, each serving a seven-year term. Commissioners are nominated by the President and confirmed by the Senate. No more than three Commissioners can be of the same political party. The President chooses one Commissioner to act as Chairman. The FTC shares jurisdiction over federal civil antitrust enforcement in the United States with the Antitrust Division of the U.S. Department of Justice. It is headquartered in the Federal Trade Commission Building in Washington, DC. The FTC was established in 1914 with the passage of the Federal Trade Commission Act. Signed into law by President Woodrow Wilson, who was a strong proponent of it, the Federal Trade Commission Act was a major response to 19th-century monopolistic trusts. Trusts and trust-busting were significant political concerns during the Progressive Era. Since its inception, the FTC has enforced the provisions of the Clayton Act, a key antitrust statute, as well as the provisions of the FTC Act, et seq. Over time, the FTC has been delegated with the enforcement of additional business regulation statutes and has promulgated a number of regulations (codified in Title 16 of the Code of Federal Regulations). The broad statutory authority granted to the FTC provides it with more surveillance and monitoring abilities than it actually uses. 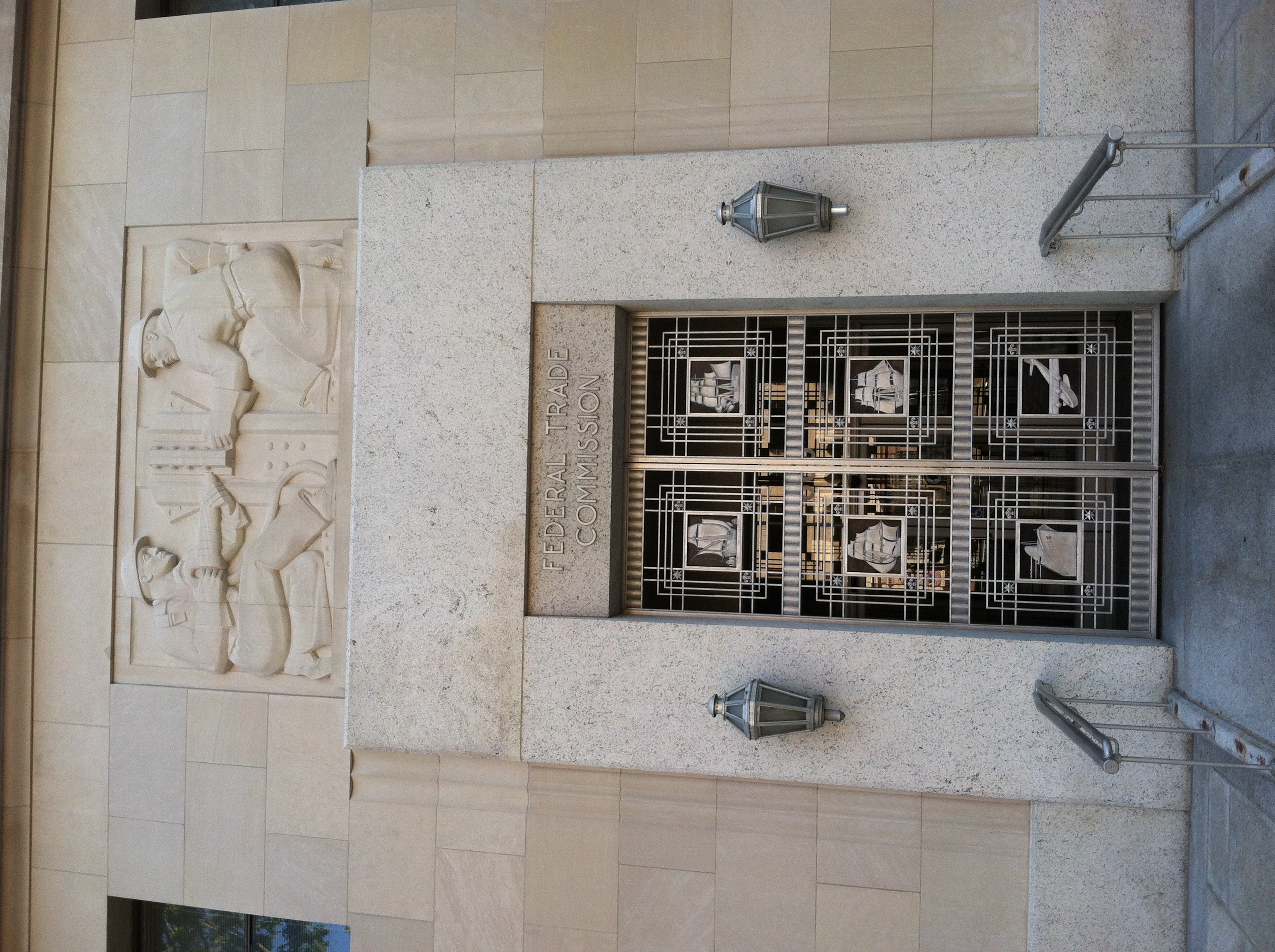 Following the Supreme Court decisions against Standard Oil and American Tobacco in May 1911, the first version of a bill to establish a commission to regulate interstate trade was introduced on January 25, 1912, by Oklahoma congressman Dick Thompson Morgan. He would make the first speech on the House floor advocating its creation on February 21, 1912. Though the initial bill did not pass, the questions of trusts and antitrust dominated the 1912 election. Most political party platforms in 1912 endorsed the establishment of a federal trade commission with its regulatory powers placed in the hands of an administrative board, as an alternative to functions previously and necessarily exercised so slowly through the courts. With the 1912 presidential election decided in favor of the Democrats and Woodrow Wilson, Morgan reintroduced a slightly amended version of his bill during the April 1913 special session. The national debate culminated in Wilson's signing of the FTC Act on September 26, 1914, with additional tightening of regulations in the Clayton Antitrust Act three weeks later. The new Federal Trade Commission would absorb the staff and duties of Bureau of Corporations, previously established under the Department of Commerce and Labor in 1903. The FTC could additionally challenge "unfair methods of competition" and enforce the Clayton Act's more specific prohibitions against certain price discrimination, vertical arrangements, interlocking directorates, and stock acquisitions.

* The FTC Act allows Commissioners to remain in their position after their term expires, until a replacement has been appointed.

This is a recent list of former commissioners, starting in 1949:

The Bureau of Consumer Protection's mandate is to protect consumers against unfair or deceptive acts or practices in commerce. With the written consent of the Commission, Bureau attorneys enforce federal laws related to consumer affairs and rules promulgated by the FTC. Its functions include investigations, enforcement actions, and consumer and business education. Areas of principal concern for this bureau are: advertising and marketing, financial products and practices, telemarketing fraud, privacy and identity protection, etc. The bureau also is responsible for the United States National Do Not Call Registry. Under the FTC Act, the Commission has the authority, in most cases, to bring its actions in federal court through its own attorneys. In some consumer protection matters, the FTC appears with, or supports, the U.S. Department of Justice.

The Bureau of Competition is the division of the FTC charged with elimination and prevention of "anticompetitive" business practices. It accomplishes this through the enforcement of antitrust laws, review of proposed mergers, and investigation into other non-merger business practices that may impair competition. Such non-merger practices include horizontal restraints, involving agreements between direct competitors, and vertical restraints, involving agreements among businesses at different levels in the same industry (such as suppliers and commercial buyers). The FTC shares enforcement of antitrust laws with the Department of Justice. However, while the FTC is responsible for civil enforcement of antitrust laws, the Antitrust Division of the Department of Justice has the power to bring both civil and criminal action in antitrust matters.

The Bureau of Economics was established to support the Bureau of Competition and Consumer Protection by providing expert knowledge related to the economic impacts of the FTC's legislation and operation.

* The FTC maintains an Office of Technology Research and Investigation to assist it in technology-related enforcement actions. * The FTC generally selects its Chief Technologist from among computer science academics and noted practitioners. The role has previously been filled by Steven K. Bellovin, Lorrie Cranor, Edward Felten, Ashkan Soltani, and Latanya Sweeney. * The FTC also maintains an academic in residence program, inviting leading legal scholars to join the FTC for a year as a Senior Policy Advisor. The role has been held by Tim Wu in 2011, Paul Ohm in 2012, and Andrea M. Matwyshyn in 2014.

The FTC investigates issues raised by reports from consumers and businesses, pre-merger notification filings, congressional inquiries, or reports in the media. These issues include, for instance, false advertising and other forms of fraud. FTC investigations may pertain to a single company or an entire industry. If the results of the investigation reveal unlawful conduct, the FTC may seek voluntary compliance by the offending business through a consent order, file an administrative complaint, or initiate federal litigation. During the course of an regulatory activities, the FTC is authorized to collect records, but not on-site inspections. Traditionally an administrative complaint is heard in front of an independent administrative law judge (ALJ) with FTC staff acting as prosecutors. The case is reviewed ''de novo'' by the full FTC commission which then may be appealed to the U.S. Court of Appeals and finally to the Supreme Court. Under the FTC Act, the federal courts retain their traditional authority to issue equitable relief, including the appointment of receivers, monitors, the imposition of asset freezes to guard against the spoliation of funds, immediate access to business premises to preserve evidence, and other relief including financial disclosures and expedited discovery. In numerous cases, the FTC employs this authority to combat serious consumer deception or fraud. Additionally, the FTC has rulemaking power to address concerns regarding industry-wide practices. Rules promulgated under this authority are known as ''Trade Rules''. In the mid-1990s, the FTC launched the fraud sweeps concept where the agency and its federal, state, and local partners filed simultaneous legal actions against multiple telemarketing fraud targets. The first sweeps operation was ''Project Telesweep'' in July 1995 which cracked down on 100 business opportunity scams. In 1984, the FTC began to regulate the funeral home industry in order to protect consumers from deceptive practices. The FTC Funeral Rule requires funeral homes to provide all customers (and potential customers) with a General Price List (GPL), specifically outlining goods and services in the funeral industry, as defined by the FTC, and a listing of their prices. By law, the GPL must be presented to all individuals that ask, no one is to be denied a written, retainable copy of the GPL. In 1996, the FTC instituted the Funeral Rule Offenders Program (FROP), under which "funeral homes make a voluntary payment to the U.S. Treasury or appropriate state fund for an amount less than what would likely be sought if the Commission authorized filing a lawsuit for civil penalties. In addition, the funeral homes participate in the NFDA compliance program, which includes a review of the price lists, on-site training of the staff, and follow-up testing and certification on compliance with the Funeral Rule."