The Federal Ministerial Police (in Spanish: ''Policía Federal Ministerial'', PFM) is a Mexican federal agency tasked with fighting corruption and organized crime, through an executive order by President Felipe Calderón. The agency is directed by the Attorney General's Office (FGR) and may have been partly modeled on the Federal Bureau of Investigation of the United States. PFM agents in action often wear masks to prevent themselves from being identified by gang leaders. PFM agents are uniformed when carrying out raids. "Street-level" uniformed federal police patrols and transport terminal security are handled by the service personnel of the National Guard.

It was formed in 2009 as a reform and renaming of the Federal Investigative Agency (Agencia Federal de Investigación or AFI) which had replaced an earlier agency, the Federal Judicial Police. Some agents of the Federal Investigations Agency were believed to work as enforcers for the Sinaloa Cartel. The Attorney General's Office reported in December 2005 that 1,500 of 7,000 AFI agents — nearly 25% of the force — were under investigation for suspected criminal activity and 457 were facing charges. In November 2008, Rodolfo de la Guardia García, the No. 2 official in the AFI from 2003–2005, was placed under arrest as investigators looked into the possibility that he leaked information to the Sinaloa Cartel in return for monthly payments. On 29 May 2009, the Federal Investigations Agency was restructured and renamed. 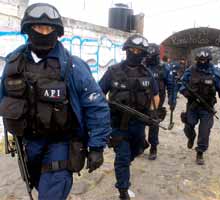