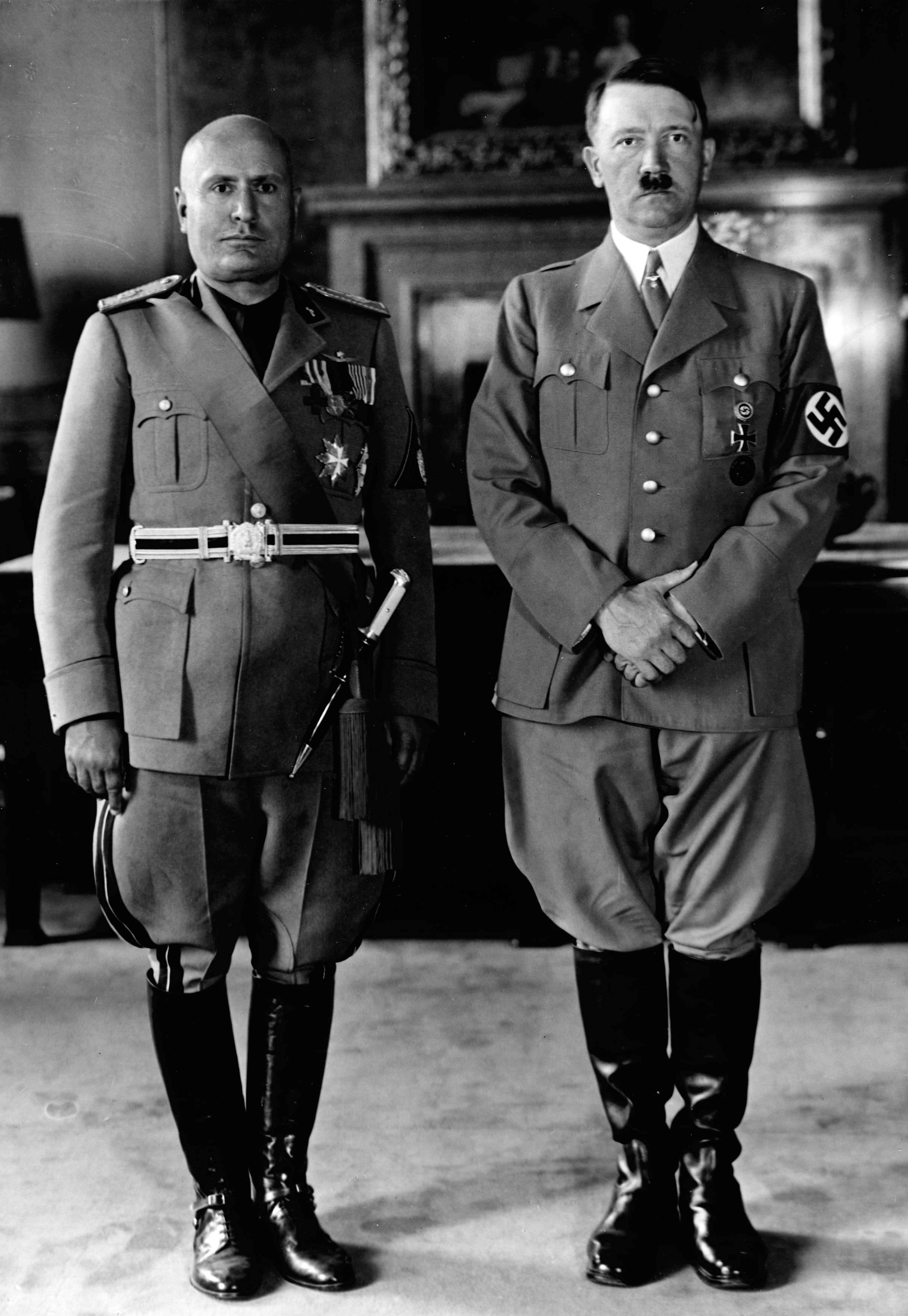 Fascism () is a form of far-right, authoritarian ultranationalism characterized by dictatorial power, forcible suppression of opposition and strong regimentation of society and of the economy which came to prominence in early 20th-century Europe. The first fascist movements emerged in Italy during World War I, before spreading to other European countries. Opposed to liberalism, democracy, Marxism, and anarchism, fascism is placed on the far right within the traditional left–right spectrum. Fascists saw World War I as a revolution that brought massive changes to the nature of war, society, the state, and technology. The advent of total war and the total mass mobilization of society had broken down the distinction between civilians and combatants. A "military citizenship" arose in which all citizens were involved with the military in some manner during the war. The war had resulted in the rise of a powerful state capable of mobilizing millions of people to serve on the front lines and providing economic production and logistics to support them, as well as having unprecedented authority to intervene in the lives of citizens. Fascists believe that liberal democracy is obsolete and regard the complete mobilization of society under a totalitarian one-party state as necessary to prepare a nation for armed conflict and to respond effectively to economic difficulties. A fascist state is led by a strong leader such as a dictator and a martial law government composed of the members of the governing fascist party to forge national unity and maintain a stable and orderly society. Fascism rejects assertions that violence is automatically negative in nature and views imperialism, political violence and war as means that can achieve national rejuvenation. Fascists advocate a mixed economy, with the principal goal of achieving autarky (national economic self-sufficiency) through protectionist and economic interventionist policies. The extreme authoritarianism and nationalism of fascism often manifests a belief in racial "purity" or a "master race", usually synthesized with some variant of racism or bigotry of a demonized other; the idea of "purity" has motivated fascist regimes to commit massacres, forced sterilizations, genocides, mass killings or forced deportations against a perceived other. Since the end of World War II in 1945, few parties have openly described themselves as fascist, and the term is instead now usually used pejoratively by political opponents. The descriptions neo-fascist or post-fascist are sometimes applied more formally to describe contemporary parties of the far-right with ideologies similar to, or rooted in, 20th-century fascist movements.

The Italian term ''fascismo'' is derived from ''fascio'' meaning "a bundle of sticks", ultimately from the Latin word ''fasces''. This was the name given to political organizations in Italy known as fasci, groups similar to guilds or syndicates. According to Italian fascist dictator Benito Mussolini's own account, the Fasces of Revolutionary Action were founded in Italy in 1915. In 1919, Mussolini founded the Italian Fasces of Combat in Milan, which became the National Fascist Party two years later. The Fascists came to associate the term with the ancient Roman fasces or ''fascio littorio''—a bundle of rods tied around an axe, an ancient Roman symbol of the authority of the civic magistrate carried by his lictors, which could be used for corporal and capital punishment at his command. The symbolism of the fasces suggested strength through unity: a single rod is easily broken, while the bundle is difficult to break. Similar symbols were developed by different fascist movements: for example, the Falange symbol is five arrows joined together by a yoke.

Historians, political scientists, and other scholars have long debated the exact nature of fascism. Indeed, historian Ian Kershaw once wrote that "trying to define 'fascism' is like trying to nail jelly to the wall". Each different group described as fascist has at least some unique elements, and many definitions of fascism have been criticized as either too broad or too narrow. According to many scholars, fascism – especially once in power – has historically attacked communism, conservatism, and parliamentary liberalism, attracting support primarily from the far right. One common definition of the term, frequently cited by reliable sources as a standard definition, is that of historian Stanley G. Payne. He focuses on three concepts: # the "fascist negations": anti-liberalism, anti-communism, and anti-conservatism; # "fascist goals": the creation of a nationalist dictatorship to regulate economic structure and to transform social relations within a modern, self-determined culture, and the expansion of the nation into an empire; and # "fascist style": a political aesthetic of romantic symbolism, mass mobilization, a positive view of violence, and promotion of masculinity, youth, and charismatic authoritarian leadership. Professor Jason Stanley, in his book ''How Fascism Works: The Politics of Us and Them'', observed that "The leader proposes that only he can solve it and all of his political opponents are enemies or traitors." Stanley says recent global events , including the pandemic and the protests, have substantiated his concern about how fascist rhetoric is showing up in politics and policies around the world. Historian John Lukacs argues that there is no such thing as generic fascism. He claims that Nazism and communism are essentially manifestations of populism and that states such as Nazi Germany and Fascist Italy are more different than similar. Roger Griffin describes fascism as "a genus of political ideology whose mythic core in its various permutations is a palingenetic form of populist ultranationalism". Griffin describes the ideology as having three core components: "(i) the rebirth myth, (ii) populist ultra-nationalism, and (iii) the myth of decadence". In Griffin's view, fascism is "a genuinely revolutionary, trans-class form of anti-liberal, and in the last analysis, anti-conservative nationalism" built on a complex range of theoretical and cultural influences. He distinguishes an inter-war period in which it manifested itself in elite-led but populist "armed party" politics opposing socialism and liberalism and promising radical politics to rescue the nation from decadence. In ''Against the Fascist Creep'', Alexander Reid Ross writes regarding Griffin's view:

Following the Cold War and shifts in fascist organizing techniques, a number of scholars have moved toward the minimalist "new consensus" refined by Roger Griffin: "the mythic core" of fascism is "a populist form of palingenetic ultranationalism." That means that fascism is an ideology that draws on old, ancient, and even arcane myths of racial, cultural, ethnic, and national origins to develop a plan for the "new man."

Indeed, Griffin himself explored this 'mythic' or 'eliminable' core of fascism with his concept of ''post-fascism'' to explore the continuation of Nazism in the modern era. Additionally, other historians have applied this minimalist core to explore ''proto-fascist'' movements. Cas Mudde and Cristóbal Rovira Kaltwasser argue that although fascism "flirted with populism ... in an attempt to generate mass support", it is better seen as an elitist ideology. They cite in particular its exaltation of the Leader, the race, and the state, rather than the people. They see populism as a "thin-centered ideology" with a "restricted morphology" which necessarily becomes attached to "thick-centered" ideologies such as fascism, liberalism, or socialism. Thus populism can be found as an aspect of many specific ideologies, without necessarily being a defining characteristic of those ideologies. They refer to the combination of populism, authoritarianism and ultranationalism as "a marriage of convenience." Robert Paxton says that: Roger Eatwell defines fascism as "an ideology that strives to forge social rebirth based on a holistic-national radical Third Way", while Walter Laqueur sees the core tenets of fascism as "self-evident: nationalism; Social Darwinism; racialism, the need for leadership, a new aristocracy, and obedience; and the negation of the ideals of the Enlightenment and the French Revolution." Racism was a key feature of German fascism, for which the Holocaust was a high priority. According to the historiography of genocide, "In dealing with the Holocaust, it is the consensus of historians that Nazi Germany targeted Jews as a race, not as a religious group." Umberto Eco, Kevin Passmore, John Weiss, Ian Adams, and Moyra Grant stress racism as a characteristic component of German fascism. Historian Robert Soucy stated that "Hitler envisioned the ideal German society as a ''Volksgemeinschaft'', a racially unified and hierarchically organized body in which the interests of individuals would be strictly subordinate to those of the nation, or Volk." Fascist philosophies vary by application, but remain distinct by one theoretical commonality: all traditionally fall into the far-right sector of any political spectrum, catalyzed by afflicted class identities over conventional social inequities.


Position in the political spectrum

Most scholars place fascism on the far right of the political spectrum. Such scholarship focuses on its social conservatism and its authoritarian means of opposing egalitarianism. Roderick Stackelberg places fascism—including Nazism, which he says is "a radical variant of fascism"—on the political right by explaining: "The more a person deems absolute equality among all people to be a desirable condition, the further left he or she will be on the ideological spectrum. The more a person considers inequality to be unavoidable or even desirable, the further to the right he or she will be". Fascism's origins, however, are complex and include many seemingly contradictory viewpoints, ultimately centered around a mythos of national rebirth from decadence. Fascism was founded during World War I by Italian national syndicalists who drew upon both left-wing organizational tactics and right-wing political views. Italian Fascism gravitated to the right in the early 1920s. A major element of fascist ideology that has been deemed to be far-right is its stated goal to promote the right of a supposedly superior people to dominate, while purging society of supposedly inferior elements. In the 1920s, the Italian Fascists described their ideology as right-wing in the political program ''The Doctrine of Fascism'', stating: "We are free to believe that this is the century of authority, a century tending to the 'right,' a fascist century". Mussolini stated that fascism's position on the political spectrum was not a serious issue for fascists: "Fascism, sitting on the right, could also have sat on the mountain of the center ... These words in any case do not have a fixed and unchanged meaning: they do have a variable subject to location, time and spirit. We don't give a damn about these empty terminologies and we despise those who are terrorized by these words". Major Italian groups politically on the right, especially rich landowners and big business, feared an uprising by groups on the left such as sharecroppers and labour unions. They welcomed Fascism and supported its violent suppression of opponents on the left. The accommodation of the political right into the Italian Fascist movement in the early 1920s created internal factions within the movement. The "Fascist left" included Michele Bianchi, Giuseppe Bottai, Angelo Oliviero Olivetti, Sergio Panunzio, and Edmondo Rossoni, who were committed to advancing national syndicalism as a replacement for parliamentary liberalism in order to modernize the economy and advance the interests of workers and the common people. The "Fascist right" included members of the paramilitary ''Squadristi'' and former members of the Italian Nationalist Association (ANI).