Fair Grounds Race Course, often known as New Orleans Fair Grounds, is a thoroughbred racetrack and racino in New Orleans, Louisiana. It is operated by Churchill Downs Louisiana Horseracing Company, LLC. As early as 1838 Bernard de Marigny, Julius C Branch and Henry Augustine Tayloe, organized races at the "Louisiana Race Course" laid out on Gentilly Road, making it the second oldest site of horseracing in America still in operation, after Freehold Raceway and before the Saratoga Race Course. It began on March 20 and lasted for five days. In 1852 it was renamed the Union Race Course. In 2009, the Horseplayers Association of North America introduced a rating system for 65 Thoroughbred racetracks in North America. Of the top Fifteen, New Orleans Fair Grounds was ranked #12, behind Evangeline Downs in Opelousas, Louisiana, which was ranked #6.

In 1838 on April 10 Bernard de Marigny, Julius C Branch and Henry Augustine Tayloe (son of John Tayloe III of The Octagon House, national leader on turf, founder of the Washington Jockey Club (1798), who imported the great English thoroughbred Diomed that sired Sir Archy-whose progeny include Lexington, Secretariat and American Pharoah; the grandson of John Tayloe II who imported Childers (by Flying Childers), Jenny Cameron and Jolly Rogers (three of the most important colonial imports) and who built the grand colonial estate and stud farm Mount Airy), organized races at the "Louisiana Race Course." 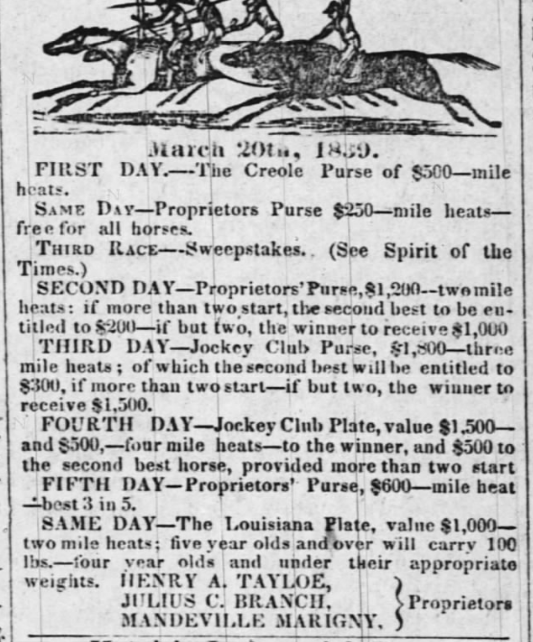 The track opened again as the "Union Race Course" in 1852. The track closed in 1857 due to competition from the Metairie Course. In 1859 the track was renamed the "Creole Race Course." In 1863, the name was changed again to the "Fair Grounds" and racing was conducted during the Civil War. The track then closed when the Metairie Course reopened after the war. In 1871, the younger members of the Metairie Jockey Club broke away to re-form the then defunct Louisiana Jockey Club and again hold meets at the Fair Grounds. In 1872 the first race card is held at the Fair Grounds under the auspices of the Louisiana Jockey Club. The Crescent City Jockey Club was established in 1892 and ran a winter racing season from December to April until they had to liquidate their assets in the spring of 1913. In 1907, Colonel Matt Winn arrived in New Orleans to establish racing dates and deal with other matters in the Louisiana horse industry. In 1908, racing was banned in New Orleans but returned in 1915. In 1919 a fire burned down the grandstand but the track was still able to conduct a race meeting. In 1921, an auto race was held at the track, the only car race at the fairgrounds. In 1940, legislative sanction was given to racing in Louisiana. The track was then sold to developers for construction of a subdivision. In 1941, a group of investors saved Fair Grounds from destruction. The track resumed racing after World War II. The Fair Grounds Racing Hall of Fame was established in 1971

In 1981 a Horse-racing|turf course was installed. In 1990 the track was sold to the Krantz family. In 1993, the grandstand was completely destroyed by a seven alarm fire and racing continued with temporary facilities in place for a couple of years. A new $27 million construction project began in 1994 and the completed grandstand/clubhouse was opened to the public on Thanksgiving Day 1997. The track was purchased by Churchill Downs Incorporated in 2004. Fair Grounds was heavily damaged in Hurricane Katrina, and was closed for over a year, until re-opening on Thanksgiving Day 2006. The track conducted a 37-day meet at Louisiana Downs in replacement of the scheduled 2005-2006 meet. Both the great race mare Pan Zareta and the winner of the 1924 Kentucky Derby, Black Gold are buried in the infield. It's also here that Tippity Witchet, the beloved son of Broomstick, ran many of his 266 races.

The track consists of a one-mile (1.6 km) dirt track and a seven-furlong turf oval. Unlike most dirt courses in North America, the track has no chutes. In addition to the grandstand and clubhouse, an adjacent building, formerly used for simulcasting, opened on September 21, 2007 as a temporary slot-machine gaming facility. On November 14, 2008, the new slot-machine facility opened for operatio

The Fair Grounds is also the location of the New Orleans Jazz & Heritage Festival, held each year over a consecutive three-day and four-day weekend - generally the last weekend in April and the first weekend in May.