Click Here for Items Related To - Eradication of infectious diseases


Video recording of a set of presentations given in 2010 about humanity's efforts towards malaria eradication Eradication is the reduction of an infectious disease's prevalence in the global host population to zero. It is sometimes confused with elimination, which describes either the reduction of an infectious disease's prevalence in a regional population to zero or the reduction of the global prevalence to a negligible amount. Further confusion arises from the use of the term eradication to refer to the total removal of a given pathogen from an individual (also known as clearance of an infection), particularly in the context of HIV and certain other viruses where such cures are sought. The selection of infectious diseases for eradication is based on rigorous criteria, as both biological and technical features determine whether a pathogenic organism is (at least potentially) eradicable. The targeted organism must not have a non-human reservoir (or, in the case of animal diseases, the infection reservoir must be an easily identifiable species, as in the case of rinderpest), and/or amplify in the environment. This implies that sufficient information on the life cycle and transmission dynamics is available at the time an eradication initiative is programmed. An efficient and practical intervention (such as a vaccine or antibiotic) must be available to interrupt transmission of the infective agent. Studies of measles in the pre-vaccination era led to the concept of the critical community size, the size of the population below which a pathogen ceases to circulate. The use of vaccination programs before the introduction of an eradication campaign can reduce the susceptible population. The disease to be eradicated should be clearly identifiable, and an accurate diagnostic tool should exist. Economic considerations, as well as societal and political support and commitment, are other crucial factors that determine eradication feasibility. Two infectious diseases have successfully been eradicated: smallpox and rinderpest. There are also four ongoing programs, targeting poliomyelitis, yaws, dracunculiasis, and malaria. Five more infectious diseases have been identified as potentially eradicable with current technology by the Carter Center International Task Force for Disease Eradication—measles, mumps, rubella, lymphatic filariasis and cysticercosis.

So far, two diseases have been successfully eradicated—one specifically affecting humans (smallpox), and one affecting a wide range of ruminants (rinderpest). 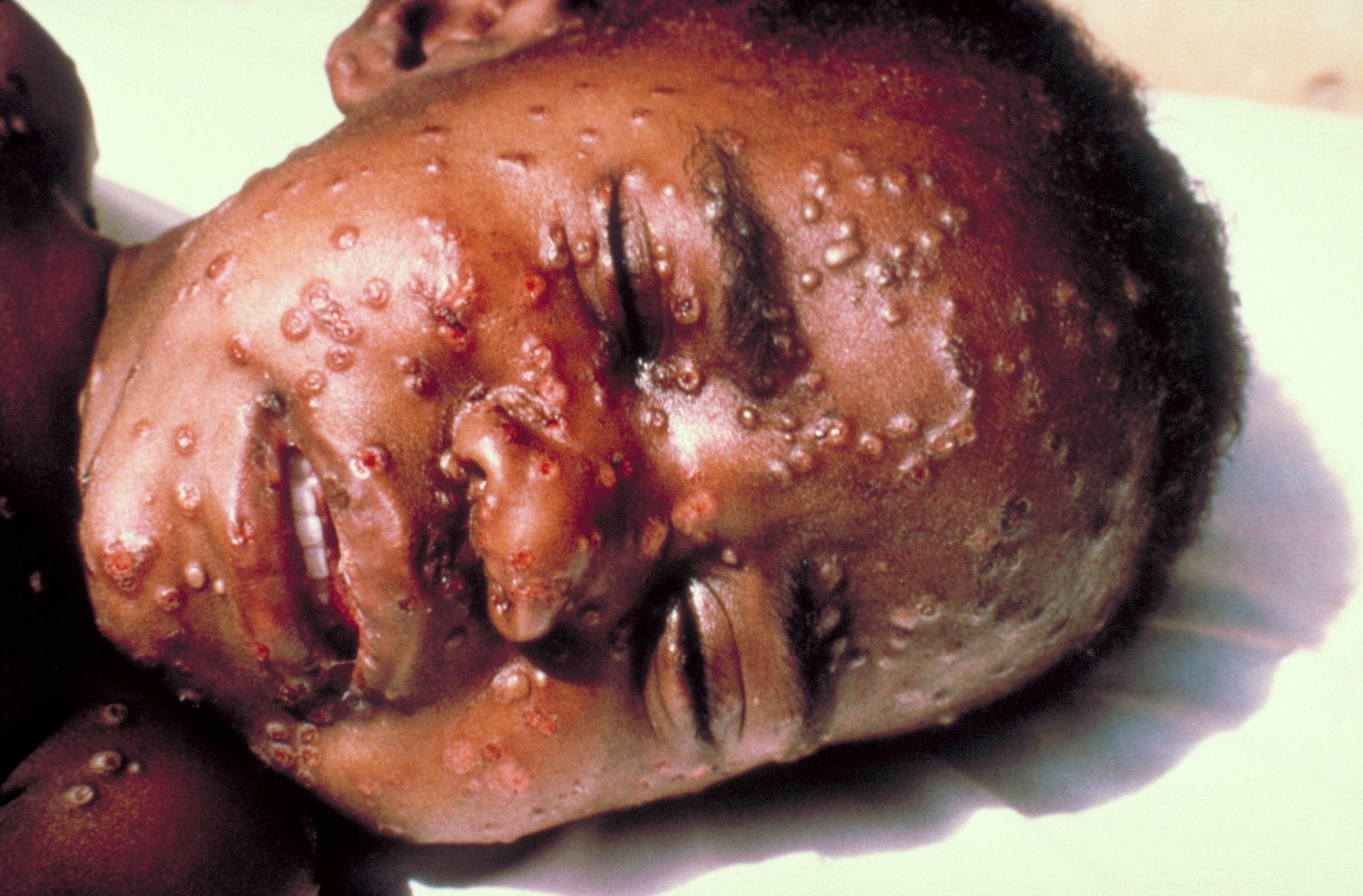 Smallpox was the first disease, and so far the only infectious disease of humans, to be eradicated by deliberate intervention. It became the first disease for which there was an effective vaccine in 1798 when Edward Jenner showed the protective effect of inoculation (vaccination) of humans with material from cowpox lesions. Smallpox (variola) occurred in two clinical varieties: ''variola major'', with a mortality rate of up to 40 percent, and ''variola minor'', also known as alastrim, with a mortality rate of less than one percent. The last naturally occurring case of ''Variola major'' was diagnosed in October 1975 in Bangladesh. The last naturally occurring case of smallpox (''Variola minor'') was diagnosed on 26 October 1977, on Ali Maow Maalin, in the Merca District, of Somalia. The source of this case was a known outbreak in the nearby district of Kurtuware. All 211 contacts were traced, revaccinated, and kept under surveillance. After two years' detailed analysis of national records, the global eradication of smallpox was certified by an international commission of smallpox clinicians and medical scientists on 9 December 1979, and endorsed by the General Assembly of the World Health Organization on 8 May 1980. However, there is an ongoing debate regarding the continued storage of the smallpox virus by labs in the US and Russia, as any accidental or deliberate release could create a new epidemic in people born since the late 1980s due to the cessation of vaccinations against the smallpox virus.

During the twentieth century, there were a series of campaigns to eradicate rinderpest, a viral disease which infected cattle and other ruminants and belonged to the same family as measles, primarily through the use of a live attenuated vaccine. The final, successful campaign was led by the Food and Agriculture Organization of the United Nations. On 14 October 2010, with no diagnoses for nine years, the Food and Agriculture Organization announced that the disease had been completely eradicated, making this the first (and so far the only) disease of livestock to have been eradicated by human undertakings.

A dramatic reduction of the incidence of poliomyelitis in industrialized countries followed the development of a vaccine in the 1950s. In 1960, Czechoslovakia became the first country certified to have eliminated polio. In 1988, the World Health Organization (WHO), Rotary International, the United Nations Children's Fund (UNICEF), and the United States Centers for Disease Control and Prevention (CDC) passed the Global Polio Eradication Initiative. Its goal was to eradicate polio by the year 2000. The updated strategic plan for 2004–2008 expects to achieve global eradication by interrupting poliovirus transmission, using the strategies of routine immunization, supplementary immunization campaigns, and surveillance of possible outbreaks. The WHO estimates that global savings from eradication, due to forgone treatment and disability costs, could exceed one billion U.S. dollars per year. The following world regions have been declared polio-free: * The Americas (1994) * Indo-West Pacific region (1997) * Europe (1998) * Western Pacific region, including China (2000) * Southeast Asia region (2014), including India * Africa (2020) The lowest annual wild polio prevalence seen so far was in 2017, with only 22 reported cases, although there were more total reported cases (including circulated vaccine-derived cases) than in 2016, mainly due to reporting of circulated vaccine-derived cases in Syria, where it likely had already been circulating, but gone unreported, presumably due to the civil war. Only two or three countries remain in which poliovirus transmission may never have been interrupted: Pakistan, Afghanistan, and perhaps Nigeria. (There have been no cases caused by wild strains of poliovirus in Nigeria since August 2016, though cVDPV2 was detected in environmental samples in 2017.) Nigeria was removed from the WHO list of polio-endemic countries in September 2015 but added back in 2016, and India was removed in 2014 after no new cases were reported for one year. On 20 September 2015, the World Health Organization announced that wild poliovirus type 2 had been eradicated worldwide, as it has not been seen since 1999. On 24 October 2019, the World Health Organization announced that wild poliovirus type 3 had also been eradicated worldwide. This leaves only wild poliovirus type 1 and circulating vaccine-derived polio circulating in a few isolated pockets, with all wild polio cases after August 2016 in Afghanistan and Pakistan.

Dracunculiasis, also called Guinea worm disease, is a painful and disabling parasitic disease caused by the nematode ''Dracunculus medinensis''. It is spread through consumption of drinking water infested with copepods hosting ''Dracunculus'' larvae. The Carter Center has led the effort to eradicate the disease, along with the CDC, the WHO, UNICEF, and the Bill and Melinda Gates Foundation. Unlike diseases such as smallpox and polio, there is no vaccine or drug therapy for guinea worm. Eradication efforts have been based on making drinking water supplies safer (e.g. by provision of borehole wells, or through treating the water with larvicide), on containment of infection and on education for safe drinking water practices. These strategies have produced many successes: two decades of eradication efforts have reduced Guinea worm's global incidence to 22 cases in 2015, after which cases rose to 25 cases in 2016, and 30 cases in 2017, but this is still down from an estimated 3.5 million in 1986. Success has been slower than was hoped—the original goal for eradication was 1995. The WHO has certified 180 countries free of the disease, and only three countries—South Sudan, Ethiopia, and Chad—reported cases of guinea worm in 2016,