The ''Empire Service'' is a higher-speed train service operated by Amtrak within the state of New York in the United States. The brand name originated with the New York Central Railroad in 1967. Trains on the line provide frequent daily service along the Empire Corridor between New York City and Niagara Falls via Albany, the state capital. During fiscal year 2018, the ''Empire Service'' carried 1,150,498 passengers on the line between New York City and Albany, while services between Albany and points west, including the and , carried an additional 366,696. Ticket revenue on the New York City–Albany section in FY2016 was $49,361,545, an increase of 1.4% from FY2015, while revenue on the Albany–Toronto route was $22,143,803.

Hourly weekday service is available on the southern portion of the line between New York Penn Station and Albany–Rensselaer. An additional two trains continue through to Niagara Falls. As of the April 14, 2019 timetable, seven trains operate along the line on most days–five between New York City and Albany, and two between New York City and Niagara Falls. The Capital Region and Albany are served by two additional trains each day: *The ''Maple Leaf,'' which runs along the entire corridor before continuing across Central and Western New York and on to Toronto *The ''Lake Shore Limited'', which follows the corridor through Central and Western New York as far as Buffalo–Depew en route to Chicago, with one section breaking off at Albany to serve Massachusetts en route to Boston. The ''Adirondack'' to Montreal and ''Ethan Allen Express'' to Rutland, Vermont also supplement service on the southern portion of the line between New York City and Albany. Both follow the corridor as far as Schenectady. Downstate, in the Hudson Valley, the portion of the route from Poughkeepsie southward is shared with the Metro-North Railroad's Hudson Line, and sees frequent commuter service, with connections to the ''Empire Service'' at Poughkeepsie, Croton-Harmon, and Yonkers. The Empire Service is one of four New York-based train routes that Amtrak operates with funding from the New York State Department of Transportation with the other three routes being the ''Adirondack, Maple Leaf,'' and ''Ethan Allen Express.''

Today's Empire Service is the descendant of numerous routes dating to 1869, when Cornelius Vanderbilt merged his Hudson River Railroad (forerunner of today's Metro-North Hudson Line) with the New York Central Railroad (NYC), thus linking New York City with Albany. Its route is largely coextensive with what was once the NYC's main line, which was the eastern portion of the "Water Level Route" from New York City to Chicago. The Buffalo-Niagara Falls leg was formerly part of an NYC subsidiary, the Buffalo and Niagara Falls Railroad, but was abandoned in 1961. In December 1967, just months before its merger with the Pennsylvania Railroad to become the Penn Central Transportation Company, the Central reorganized all its passenger routes. All trains along the New York City-Buffalo corridor were consolidated under the Empire Service brand. Marketing emphasized convenient service within New York City, with a reduced emphasis on long-distance trains which continued west of Buffalo. This program continued after the Penn Central merger. The new scheduling produced mixed results; passengers were deterred by the poor quality of the passenger cars and the inconvenient locations of stations along the route. 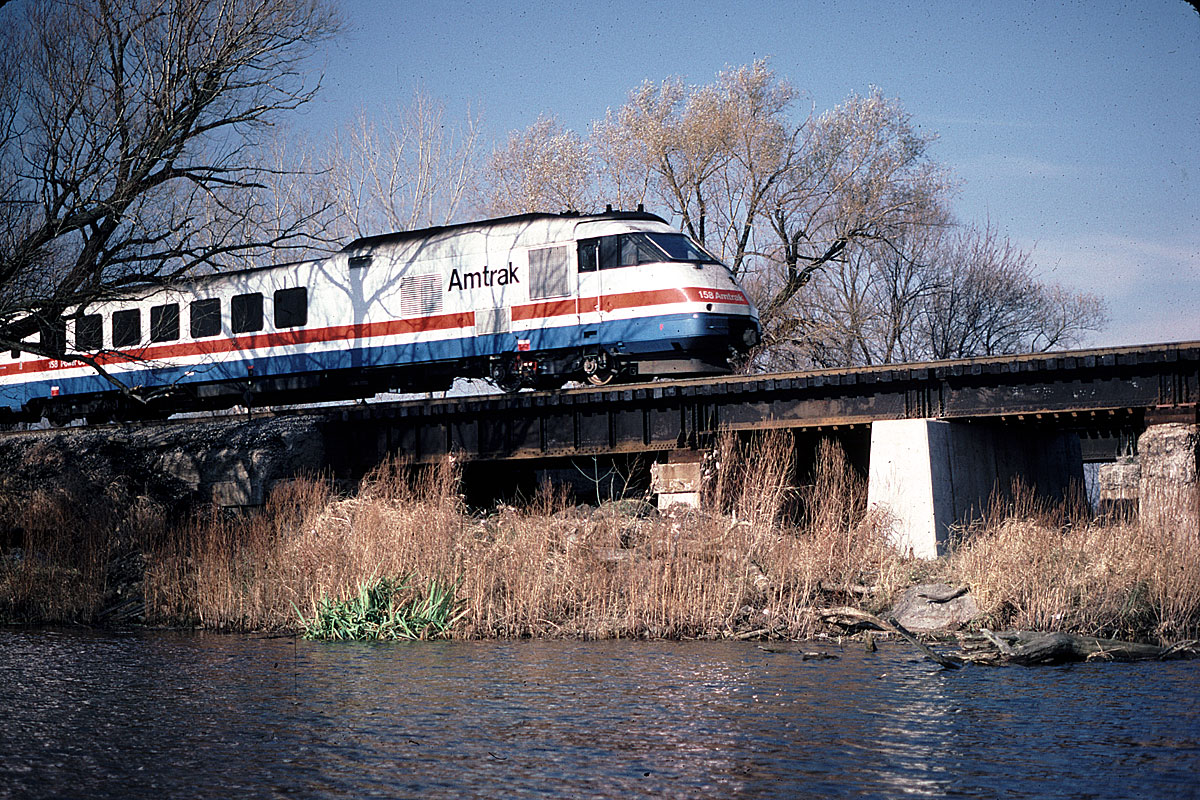 Penn Central handed the Empire Service, along with most of its other routes, to Amtrak on May 1, 1971. Initially, Amtrak retained seven daily trains on the New York City—Albany—Buffalo corridor: four operated from New York City to Albany, and three ran through to Buffalo. All service west of Buffalo was discontinued. All trains retained their ex-Penn Central numbers and were otherwise nameless. Westward service resumed briefly after May with the introduction of the Chicago–New York City ''Lake Shore'', but this train was canceled on January 6, 1972. The ''Empire Service'' name was restored on June 11, 1972, and individual names were added to the trains along the corridor on May 19, 1974. Despite doubts about Amtrak's potential success, the company was key in reestablishing some discontinued services along the Empire Corridor. Service beyond Buffalo to Niagara Falls was reestablished with such trains as the ''Niagara Rainbow'' and the ''Maple Leaf''. In addition Amtrak restored service to downtown Schenectady in 1978, a service which Penn Central had discontinued in 1968, for all ''Empire Service'' trains that continued beyond Albany. Service was restored permanently on the Water Level Route to Chicago with the reintroduction of the old New York Central train, the ''Lake Shore Limited,'' in 1975. On April 7, 1991, all Amtrak ''Empire Service'' trains started using the new Empire Connection into New York City Penn. Prior to that change, all passenger trains from Albany and beyond went into Grand Central Terminal, forcing passengers traveling to the Northeast Corridor to transfer via shuttle bus, taxicab, or via the New York City Subway to reach Penn Station. The move also saved Amtrak the expense of operating two stations in New York City. All service along the Empire Corridor was consolidated under the ''Empire'' brand on October 28, 1995. The names were restored just a year later, only to be dropped again in 1999. In October 2011, CSX and Amtrak reached an agreement for Amtrak to lease the Hudson Subdivision between Poughkeepsie and Schenectady. Since 2012, Amtrak has effectively had operational control over the Hudson Subdivision, handling all maintenance and capital responsibilities. CSX retained freight rights over the line, which hosts only five freights a day. In the Capital District, Amtrak will use federal funds to double track the line between Rensselaer and Schenectady, and add an additional station track at the Albany–Rensselaer station. Amtrak sees the lease as key to improving ''Empire Service'' speeds and frequencies. Amtrak officially assumed control on December 1, 2012, with trains in the section now dispatched by the Amtrak Control and Command Center in New York City. From July 10 through September 1, 2017, six ''Empire Service'' trains (three round trips) used Grand Central Terminal as part of Amtrak's work to make repairs at Penn Station. All trains using the Empire Connection, excluding the ''Lake Shore Limited'', again operated into Grand Central Terminal from May 26 to September 4, 2018 to allow work on the Empire Tunnel, the Spuyten Duyvil movable bridge, and Track 19 in New York City's Penn Station. In May 2018, the Massachusetts Senate approved funds for a pilot of the "Berkshire Flyer", a seasonal extension of a weekend ''Empire Service'' round trip to Pittsfield. The trial service, modeled on the CapeFLYER, is scheduled begin in June 2020. One Friday afternoon train will be extended to Pittsfield and return on Sunday afternoon.

The ''Empire Service'' operates over CSX Transportation, Metro-North Railroad, and Amtrak trackage: *CSX trackage: Niagara Subdivision, Buffalo Terminal Subdivision, Rochester Subdivision, Mohawk Subdivision, Selkirk Subdivision, and Hudson Subdivision, Niagara Falls to Poughkeepsie (Amtrak-owned between Hoffmans and Schenectady, leased to Amtrak between Schenectady and Poughkeepsie) *Metro-North Railroad: Hudson Line, Poughkeepsie to Spuyten Duyvil *Amtrak: Empire Connection, Spuyten Duyvil to Penn Station The northern terminus for most trains, Albany-Rensselaer, is the ninth-busiest Amtrak station in the country and the busiest serving a metropolitan area of fewer than two million people. This is mainly due to the large number of passengers traveling along the New York City-Albany corridor, which for years was to the New York Central what the Philadelphia-New York corridor was to the Pennsylvania Railroad. From Spuyten Duyvil to Albany, the train runs mostly parallel to the Hudson River (viewable on the left side northbound and the right side southbound).

The New York Central did not order new equipment for the ''Empire Service'', preferring to rehabilitate existing equipment. 40 64-seat coaches, built by Pullman-Standard in 1946, were refurbished in 1967–1968. Another 21 coaches from the same pool were rebuilt as 50-seat "coach-buffet" cars. Amtrak acquired this equipment when it took over the Penn Central's passenger trains in 1971. The cars remained on the ''Empire Service'' under Amtrak into the mid-1970s. A typical train between New York City and Albany consisted of two coaches and the coach-buffet or "snack bar" coach. Trains which operated west of Albany had additional coaches. Presently, the Empire Service usually operates with a single GE P32AC-DM locomotive, four Amfleet coaches, and a business class car. The Empire Service utilizes dual-mode locomotives due to a longstanding ban on diesel operations in the Penn Station tunnels. An "on the fly" power change from diesel to third rail (or vice versa) takes place once the train enters the Empire Connection tunnel near Penn Station. For trains traveling from New York City to Niagara Falls, the business class car is also used as a café car.

All stops are within the U.S. state of New York.

The Empire Service has been a long-standing candidate for high-speed rail and electrification. The need for high-speed rail service has been addressed by former Governor George Pataki, former Senate Majority Leader Joseph Bruno, and members of the New York State Assembly who represent the upstate regions. Other politicians have asked that high-speed rail be introduced along the Empire Corridor, diminishing the time for New York City – Buffalo trains from seven hours to just three hours; train travel from New York City to Albany would take less than two hours to complete. This may introduce Acela trains to the Empire Corridor if high-speed rail is successful. Another reason, which politicians have noted, is that high-speed trains might help improve Upstate New York's economy, which had become stagnant. Currently, trains attain a maximum speed of on the stretch of track just south and west of Albany. Areas east of Schenectady also see speeds above .