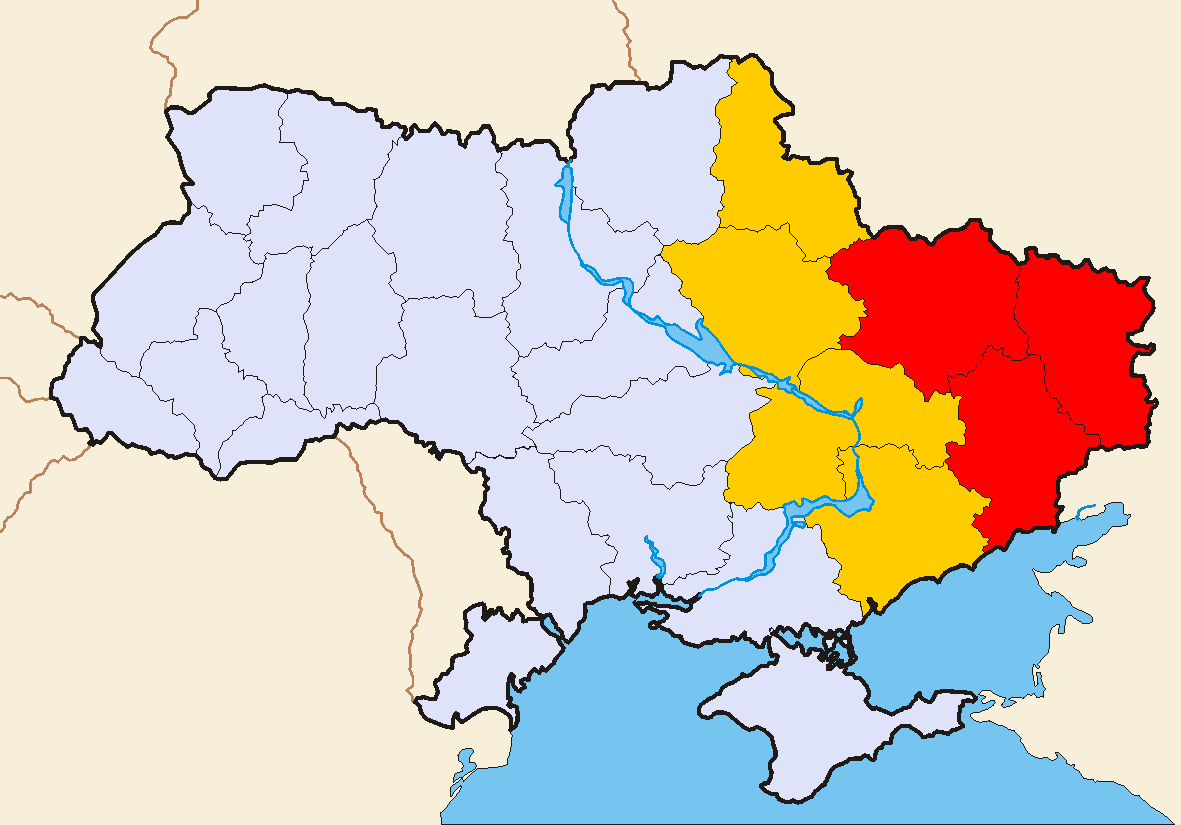 Eastern Ukraine or East Ukraine (russian: Восточная Украина, ''Vostochnaya Ukraina''; uk|Східна Україна, ''Skhidna Ukrayina''), generally refers to territories of Ukraine east of the Dnipro river, particularly Kharkiv, Luhansk and Donetsk oblasts. Dnipropetrovsk and Zaporizhzhia Oblasts sometimes are also regarded as Eastern Ukraine. In regard to traditional territories, the area encompasses portions of the southern Sloboda Ukraine, Donbas, the western Azov Littoral (Pryazovia). Almost a third of the country's population lives within the region, which includes several cities with population of around a million. Within Ukraine, the region is the most highly urbanized, particularly portions of central Kharkiv Oblast, south-western Luhansk Oblast, central, northern and eastern areas of Donetsk Oblast. The most common language in eastern Ukraine is Russian.

The region stretches from southern areas of the Central Russian Upland to the northern shores of the Sea of Azov, from the eastern border with Russia to Black Sea and Dnieper lowlands (including the left banks of Dnieper) to the west. Aside of Dnieper, the major river of eastern Ukraine is Seversky Donets which gave the name to the main economical region for that portion of the country, Donbas (Donets basin).

The territory is heavily urbanized and commonly associated with the Donbas. The three largest metropolitan cities form an industrial triangle within the region. Among the major cities with population of over 200,000 people are Kharkiv, Dnipro, Donetsk-Makiivka, Zaporizhzhia, Mariupol, Luhansk, Horlivka and Kamianske. Cities of Donetsk and Makiivka create what is known as urban sprawl with very close proximity to other important cities such as Horlivka and Yenakieve.

A large majority of voters in eastern Ukraine (83% or more in each oblast) approved Ukraine's declaration of independence in the 1991 referendum, although the numbers were not as high as in the west. In 2014, pro-Russian protests took place in parts of eastern Ukraine. Some of the protesters were "tourists" from Russia.