The Distinguished Flying Cross (DFC) is a military decoration of the United States Armed Forces. The medal was established on July 2, 1926, and is currently awarded to any persons who, after April 6, 1917, distinguish themselves by single acts of heroism or extraordinary achievement while participating in aerial flight. Both heroism and extraordinary achievement are entirely distinctive, involving operations that are not routine. The medal may be awarded to friendly foreign military members in ranks equivalent to U.S. Pay Grade of O-6 and below, in actual combat in support operations. 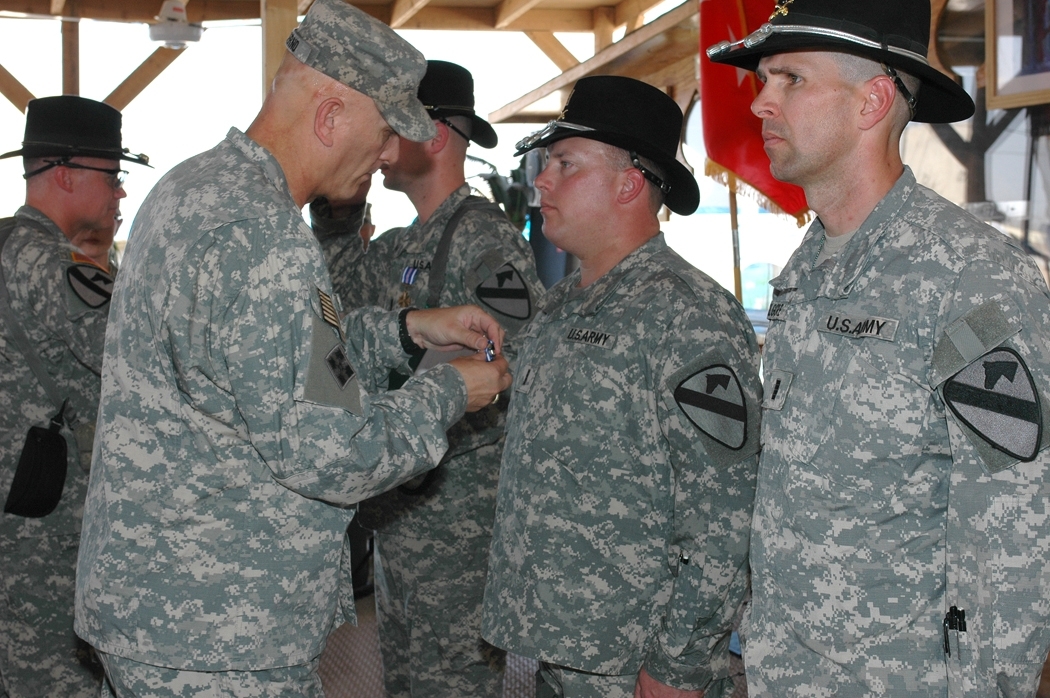 The first award of the Distinguished Flying Cross was made by President Calvin Coolidge on May 2, 1927, to ten aviators of the U.S. Army Air Corps who had participated in the Army Pan American Flight which took place from December 21, 1926, to May 2, 1927. Two of the airmen died in a mid-air collision trying to land at Buenos Aires on February 26, 1927, and received their awards posthumously. The award had only been authorized by Congress the previous year and no medals had yet been struck, so the Pan American airmen initially received only certificates. Among the ten airmen were Major Herbert Dargue, Captains Ira C. Eaker and Muir S. Fairchild, and 1st Lt. Ennis C. Whitehead. Charles Lindbergh received the first presentation of the actual medal about a month later from Coolidge during the Washington, D.C., homecoming reception on June 11, 1927, from his trans-Atlantic flight. The medal had hurriedly been struck and readied just for that occasion. The 1927 War Department General Order (G.O. 8) authorizing Lindbergh's DFC states that it was awarded by the president, while the General Order (G.O. 6) for the Pan American Flyers' DFC citation notes that the War Department awarded it "by direction of the President." The first Distinguished Flying Cross to be awarded to a Naval aviator was received by Commander Richard E. Byrd, USN for his trans-Atlantic flight from June 29 to July 1, 1927, from New York City to the coast of France. Byrd and his pilot Machinist Floyd Bennett had already received the Medal of Honor for their historic flight to the North Pole on May 9, 1926. Numerous recipients of the medal earned greater fame in other occupations; a number of astronauts, actors, and politicians have been Distinguished Flying Cross recipients, including President George H. W. Bush. DFC awards can be retroactive to cover notable achievements back to the beginning of World War I. On February 23, 1929, Congress passed special legislation to allow the award of the DFC to the Wright brothers for their December 17, 1903, flight. Other civilians who have received the award include Wiley Post, Jacqueline Cochran, Roscoe Turner, Amelia Earhart, Glenn H. Curtiss, and Eugene Ely. Eventually, it was limited to military personnel by an Executive Order. Amelia Earhart became the first woman to receive the DFC on July 29, 1932, when it was presented to her by Vice President Charles Curtis in Los Angeles for her solo flight across the Atlantic Ocean earlier that year.

During World War II, the medal's award criteria varied widely depending on the theater of operations, aerial combat that was engaged in, and the missions that were accomplished. In the Pacific, commissioned officers were often awarded the DFC, while enlisted men were given the Air Medal. In Europe, some crews received it for their overall performance through a tour of duty. The criteria used were however not consistent between commands or over time. Individual achievement could also result in the medal being awarded. For example, George McGovern received one for successfully completing a bombing mission after his aircraft lost an engine, and then landing it safely.

The Distinguished Flying Cross was authorized by Section 12 of the United States Army Air Corps Act enacted by Congress on July 2, 1926, as amended by Executive Order 7786 on January 8, 1938 and USC 10, 9279. This act provided for award to any person who distinguishes himself "by heroism or extraordinary achievement while participating in an aerial flight" while serving in any capacity with the Air Corps.

The Distinguished Flying Cross was designed by Elizabeth Will and Arthur E. DuBois. The medal is a bronze cross pattee, on whose obverse is superimposed a four-bladed propeller, 1 11/16 inches in width. Five rays extend from the reentrant angles, forming a one-inch square. The reverse is blank; it is suitable for engraving the recipient's name and rank. The cross is suspended from a rectangular bar. The suspension and service ribbon of the medal is 1 3/8 inches wide and consists of the following stripes: 3/32 inch Ultramarine Blue 67118; 9/64 inch White 67101; 11/32 inch Ultramarine Blue 67118; 3/64 inch White 67101; center stripe 3/32 inch Old Glory Red 67156; 3/64 inch White 67101; 11/32 inch Ultramarine Blue 67118; 9/64 inch White 67101; 3/32 inch Ultramarine Blue 67118. Devices Additional awards of the Distinguished Flying Cross are shown with bronze or silver Oak Leaf Clusters for the Army, Air Force, and Space Force, and gold and silver Inch Stars for the Navy, Marine Corps, and Coast Guard. The Air Force, Space Force, Navy, and Marine Corps may authorize the "V" device for wear on the DFC to denote valor in combat. The Army does not authorize the "V" device to be worn on the DFC. The other services can also award the DFC for extraordinary achievement without the "V" device. Since 2016, the "V" Device can be worn on the DFC. On January 7, 2016, a Secretary of Defense memorandum standardized the use of the “V” device as a valor-only device. The Department of Defense published “DOD Manuals 1348.33, Volumes 1-4, DOD Military Decorations and Awards” which unified the criteria for awards. DOD 1348.33. "AR 600-8-22, Military Awards" authorizes use of the "V" Device with the DFC for combat valor and the "C" Device for meritorious service or achievement under combat conditions.

In July 2014, the United States Senate passed the Distinguished Flying Cross National Memorial Act. The act was sponsored by Senator Barbara Boxer, to designate the Distinguished Flying Cross Memorial at March Field Air Museum adjacent to March Air Reserve Base in Riverside, California as a national memorial to recognize members of United States Armed Forces who have distinguished themselves by heroism in aerial flight. The act was signed into law by President Barack Obama on July 25, 2014.

Notable recipients of the DFC

Note: the rank indicated is the highest held by the individual.

* Glenn Curtiss: aircraft designer. Posthumously awarded in 1933. * Amelia Earhart: legendary aviatrix. First woman to receive the DFC by an act of Congress in 1932. * Eugene Burton Ely: first person to make a ship-board landing in an aircraft. Posthumously awarded in 1933. * Harold Gatty: Navigator with Wiley Post on record-breaking around the world flight. Awarded in 1932. * Wiley Post: completed record-breaking around-the-world flight and was the first person to fly solo around the world. Awarded in 1932. * Roscoe Turner: flamboyant air racing champion. Presented in 1952. (Last award of the DFC to a civilian.) * Orville Wright: aviation pioneer. Awarded by Act of Congress on December 18, 1928. * Wilbur Wright: aviation pioneer. Posthumously awarded by Act of Congress on December 18, 1928.