The Detroit Lions are a professional American football team based in Detroit. The Lions compete in the National Football League (NFL) as a member of the National Football Conference (NFC) North division. The team plays its home games at Ford Field in Downtown Detroit. The franchise was founded in Portsmouth, Ohio as the Portsmouth Spartans and joined the NFL on July 12, 1930. Amid financial struggles, the team was relocated to Detroit in 1934. The team was also renamed the Lions in reference to the city's Major League Baseball (MLB) franchise, the Tigers. The Lions won four NFL Championship Games between 1935 and 1957, all prior to the Super Bowl era. Since their 1957 championship, the team has won only a single playoff game in 1992 and never advanced beyond the NFC Championship Game. They are the oldest NFL team to not appear in the Super Bowl, as well as the only franchise operational for the entirety of the Super Bowl era and the only NFC team not to appear.

Aside from a brief change to scarlet and black from 1948 to 1950 instituted by then head coach Bo McMillin, which was influenced by his years as coach at Indiana, the Lions uniforms have basically remained the same since they moved to Detroit in 1934–silver helmets, silver pants, and either blue or white jerseys. 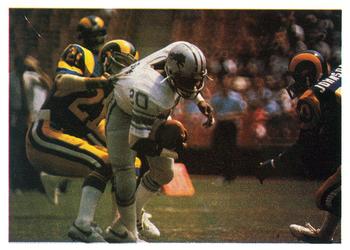 Glenn Presnell, the last surviving member of the 1934 Lions, recalled that Richards had asked him to help pick the Lions' colors after they moved to Detroit. Richards asked them to pick from combinations that included red and white, orange and black, and blue and white. The Presnells liked blue and white the best, so Richards selected it. The blue used by the Lions is officially known as "Honolulu blue," which is supposedly inspired by the color of the waves off the coast of Hawaii.