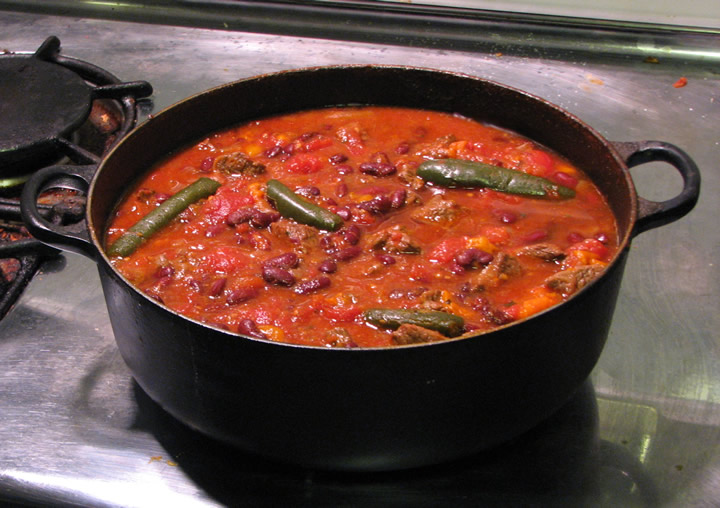 When New Mexico was still part of the New Spain and the Republic of Mexico, regional ingredients were more limited, with few imports supplementing locally grown food. This gave New Mexican cuisine its unique palate. All cooking was done at home by women who toasted whole spices and ground corn by hand using ''metates''. Hunters made "jerky", in the style of New Mexican carne seca, with Game (hunting), game meats, fish and wild birds. Fruits and vegetables were sun-dried in preparation for the winter. Food was slow-cooked in iron or copper pots over open fires, and the only imported items were non-perishables from New Spain—coffee, sugar and spices. The expansion of the railway system allowed the importation of milled flour and Cornmeal, corn meal, sugar, lemons, oranges and other ingredients from "the States". Traditional ways of cooking were eventually replaced by iron stoves. The basic chile, beans and corn dishes from Mexican cuisine evolved over time and in modern form often substitute extremely hot peppers and condiments for the subtle, balanced spicing of authentic Mexican cuisine. Native Americans and Hispanos developed the earliest forms of the New Mexico chile to supplement this taste. By the early 20th-century tostada (tortilla), ''tostadas'', "chile joints" and home-cooked "chile suppers" and ''tamale'' vendors had become part of the cultural landscape.

The staple ingredients of Southwestern cuisine are corn, squash (plant), squash and beans. Called the "Three Sisters (agriculture), three sisters", they have been staples of North-American agriculture since ancient times. Beans are served whole or refried beans, refried, and both styles can be used as filling for tostada (tortilla), tostadas, tacos, burritos and similar dishes. Many bean varieties are consumed but the pinto bean is the most iconic bean of southwestern cuisine. Southwestern food is distinguished by the use of chile peppers as the primary seasoning, first brought to Santa Fe, New Mexico, Santa Fe with the arrival of the Spanish from Mexico. Chile peppers are used as a topping for virtually every dish from pizza to bagels, or just fried tempura and eaten whole. Most dishes, from burritos to scrambled eggs, are served with plentiful amounts of chile sauce.

The cuisine of Arizona is influenced by its location and proximity to Mexico and reflects a blend of Hispanic, Native-American and pioneer culinary traditions. The O'odham peoples cultivated crops like maize and tepary beans around the Sonoran Desert area located at the base of the Tucson Mountains. Local dishes include ''raspado'', ''huevos rancheros'' and ''tamales''. The Sonoran hot dog is an Arizona specialty served with pinto beans, guacamole, jalapeños, salsa (sauce), salsa and layered with other southwestern flavors. Tucson, Arizona became the first American city to receive the designation of "City of Gastronomy" by UNESCO. Restaurants use local ingredients, many grown with heirloom seeds distributed by non-profit organizations like Native Seeds/SEARCH. Salads and salsas are made with Cylindropuntia, cholla cactus, gathered and dried at the San Xavier Indian Reservation.

The traditional Cuisines of Colorado is similar to the cuisine of New Mexican cuisine, New Mexico: being influenced by the it's ties to the Colonial Spanish America, colonial Spanish, Mexican cuisine, Mexican, Indigenous cuisine of the Americas, Native American and the Chuckwagon, American Chuckwagon. Emphasis on wild game such as Bison, Elk, Trout, and Rocky Mountain oysters, Rocky mountain oyster accompanied with local products such as ''Paliside peaches'' and ''Olathe sweet corn'' sets them apart from the cuisine of New Mexico. Furthermore varietal differences between the heirloom crops of local Hispanos of New Mexico, Hispano populations in southern Colorado also exist, with the ''Garcia bolita beans'' (as opposed to the ''New Mexican bolita'') and the New Mexico chile pepper from Hatch, New Mexico, as well as peppers from Pueblo, Colorado. Due to this there exists a friendly rivalry between Colorado and New Mexico over who grows the best chile. The Pueblo chili tends to accompany itself to traditional dishes like that of the Slopper and Coloradoan green chili.

The indigenous cuisine of Nevada is mainly New Mexican cuisine, New Mexican as well as Utah influenced Mormon foodways. With some California cuisine, California influences. It is also greatly influenced by the myriad of buffets and global cuisine, global restaurants in the Las Vegas Valley area. Other foods such as Basque cuisine also have a presence in the area, with many Basque restaurants in the area of Las Vegas and a Basque festival in Elko, Nevada, Elko. Originally invented in California, Picon Punch is a signature drink not often found outside Nevada in modern times.

The most prevalent cuisine type of New Mexico is that of the cuisine originating in the historical region of Santa Fe de Nuevo México. The modern New Mexican cuisine is a fusion the cuisine of the Puebloans and Hispanos of New Mexico.

Potatoes were the first crop planted by the pioneers when they arrived in the Salt Lake Valley in 1847 with seeds from the eastern states. According to William Clayton (Mormon), William Clayton the first settlers in Utah also planted turnips, oats, Maize, corn, buckwheat and beans. Peach, Peach pits and Apple, apple seeds were planted at the insistence of Brigham Young. Veterans of the Mexican–American War brought back seeds from California, introducing club wheat and the California pea to the state. In modern times Utah is not noted for its culinary traditions except its fry sauce, a mix of ketchup and mayonnaise that is served with nearly everything. 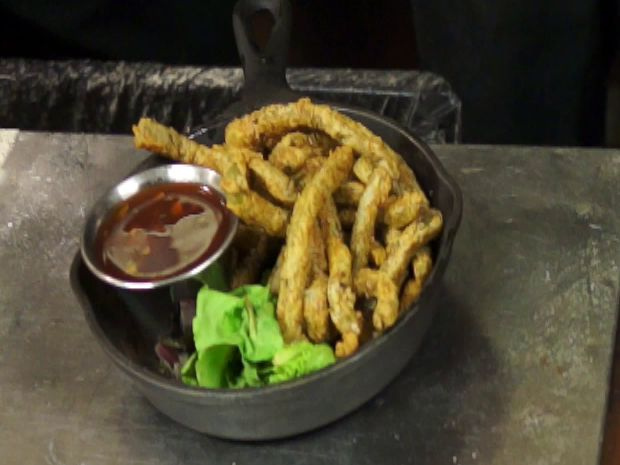 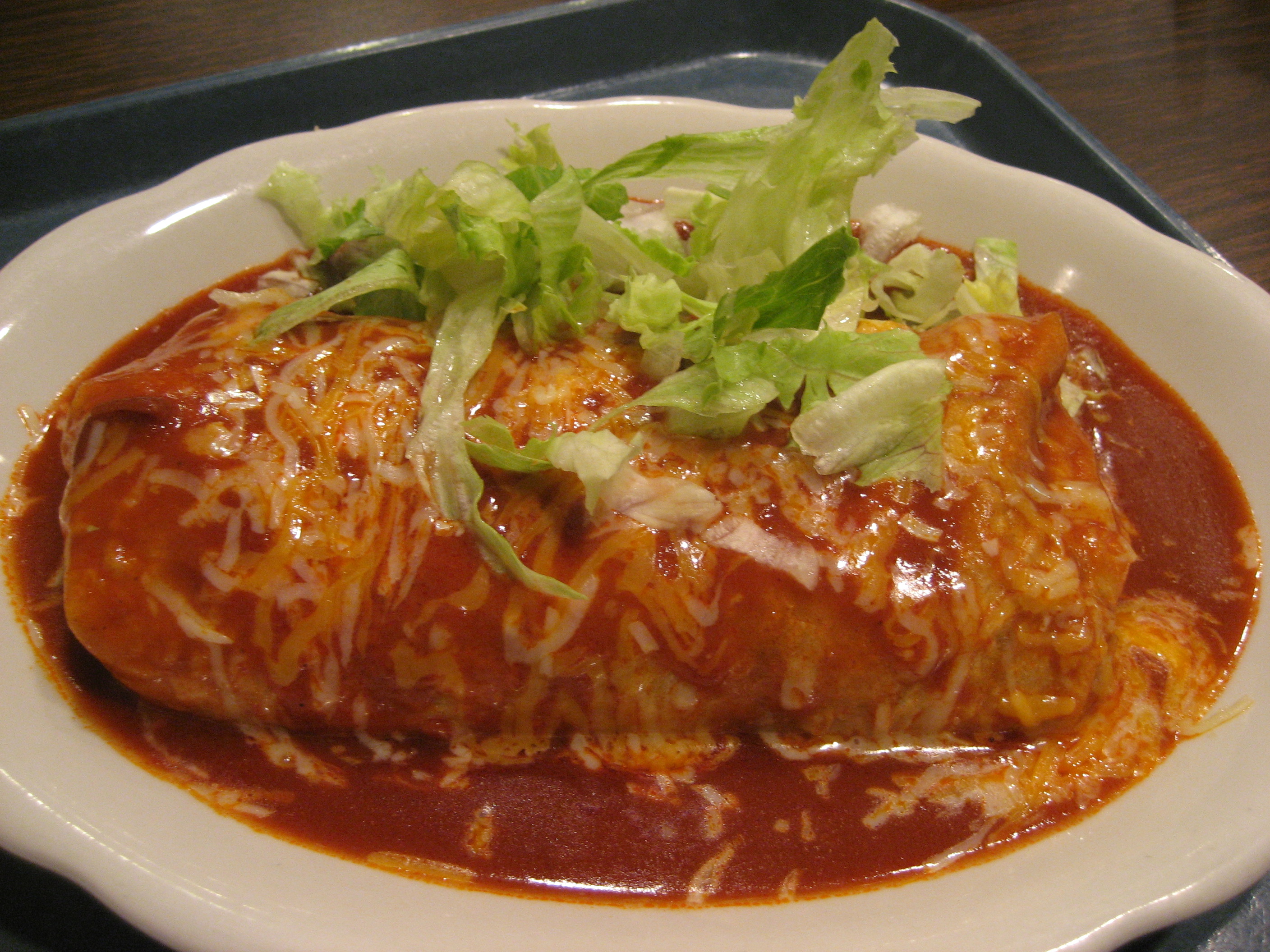